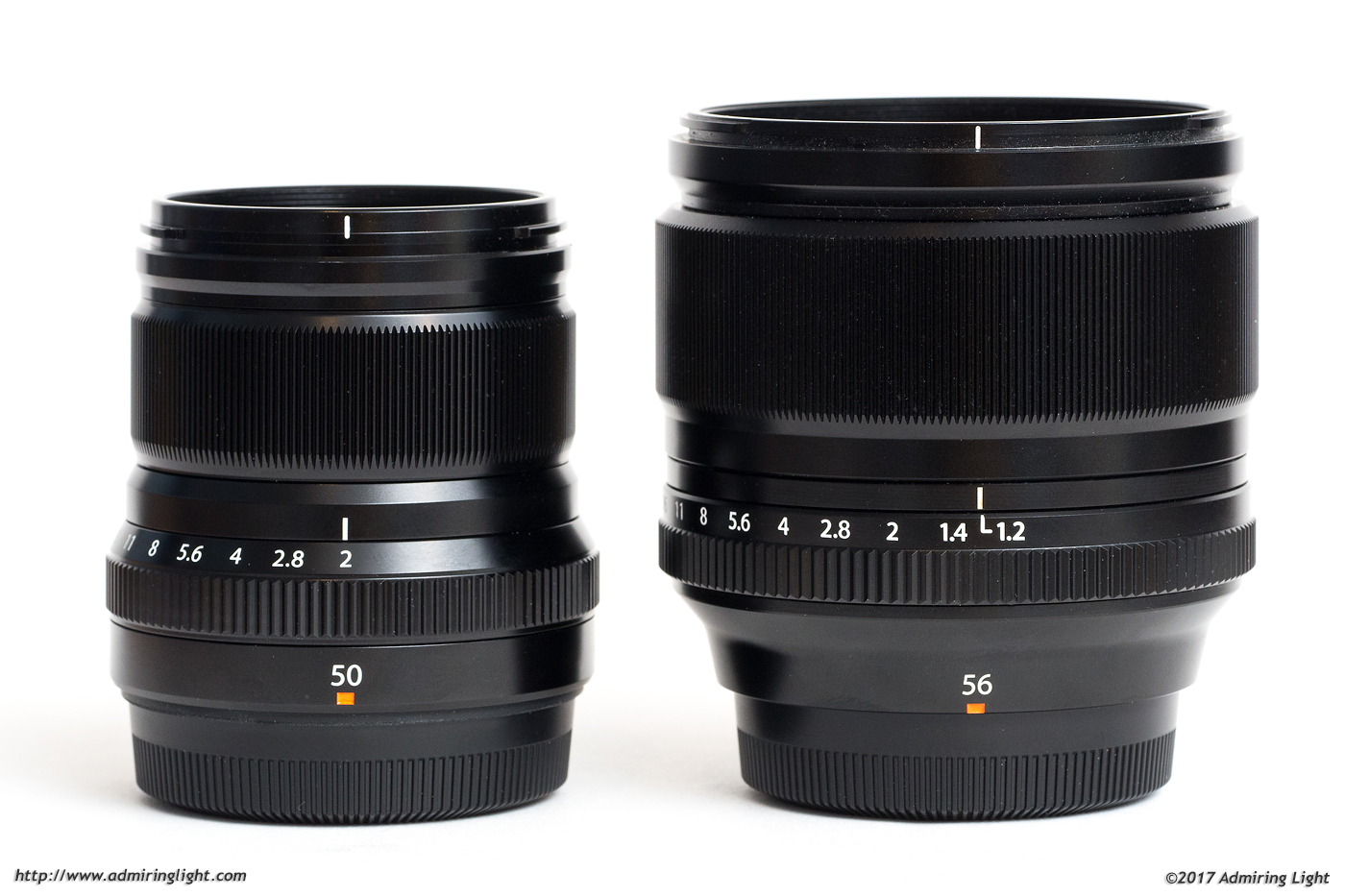 Today I decided to do a quick test of the new 50mm f/2 compared to the excellent 56mm f/1.2.  The new 50mm f/2 is a compact, weather-resistant prime lens, while the older 56mm f/1.2 fills the class 85mm portrait focal length with an ultra-fast f/1.2 aperture.  Obviously, the 56mm f/1.2 will provide over one stop of additional light, but in other imaging characteristics, how do they stack up?  Let’s take a look.

As you can see from above, while similar in length, the two lenses are quite a bit different in width, as well as weight. The 56mm f/1.2 is one of the legendary lenses in the Fuji X lineup. It’s one of my personal favorite lenses of all time, and I love shooting with it.  It’s not a perfect lens by any means, but its combination of character, sharpness and great drawing style make for a very compelling optic.  The new 50mm f/2 WR adds to Fuji’s growing line of slower, smaller primes, which pack excellent optical quality into a more compact lens.  Like all recent Fuji lenses, the lens is sealed against dust and moisture and features a fast focus motor.

Here’s my typical lens test, with a flat subject that has lots of fine detail, and a crystal decanter in the background to display how the lens deals with bokeh. The target book was place around 1.3m away from the camera, with framing adjusted for the slight focal length distance. Images were taken on my Fuji X-T20 from wide open through f/8, with self timer set and on a sturdy tripod. Below is the test shot (50mm f/2 @ f/2):

First let’s take a look at image sharpness.  Below are 100% crops from both the center and upper right corner of each frame, from f/2 to f/8 in one stop increments, plus a shot of the 56mm f/1.2 wide open.  Click on the image to open it full size, and be sure to magnify to view at 100%.

Looking at the crops, two things are immediately apparent to me.  First, both lenses are quite good, straight from wide open, and across the vast majority of the image frame.  While there is a touch of extreme corner softness from both lenses at wide apertures, it is very slight.  Second: the 56mm f/1.2 really outclasses the 50mm in center sharpness.  The 50mm f/2 is sharp, no doubt, even producing very good sharpness wide open, but the 56mm displays similar central sharpness at f/1.2, and by f/2 is resolving the print dithering pattern. The corners at f/2 are fairly comparable between the two lenses, though the 50mm f/2 shows better contrast at the edges at this aperture. By f/2.8, both lenses show very impressive sharpness all the way to the extreme corners, and are hard to tell apart at the corner at smaller apertures.  The 50mm f/2 reaches excellent central resolution by f/5.6, but this only matches what the 56mm f/1.2 can do at f/2, while the 56mm at smaller apertures is just truly critically sharp.  I’d imagine the 56mm can resolve detail on significantly denser sensors. There’s sharpness to spare.

Below are 100% crops of the crystal decanter in the background, at the same apertures as before.  Again, click on the image to view full size in a new tab.

Here things are rather different.  The 50mm f/2 wide open shows very smooth bokeh, with very evenly illuminated discs.  The 56mm f/1.2 also shows evenly illuminated discs at f/2, though at f/1.2, there is some bright line outlining on one side that adds some roughness (and a character that I personally like, but not everyone will.) Stopping down, you can see that the 50mm has a little less defined polygons from the aperture, but overall character is rather similar.  The 50mm also has a bit higher contrast in the background, making the 56mm shot look a little more creamy.  Bokeh is extremely subjective, so I’ll let you be the judge, but they are pretty close to a wash here in my eye.

Well, for those debating between these two lenses, there’s good news: both are very good lenses.  The 56mm f/1.2 is sharper at similar apertures over most of the frame, though the 50mm f/2 is a touch sharper at the edges at f/2.  Bokeh is a fairly close race, and as both are quite sharp, and both have nice renderings, I’d consider the other factors when choosing between the two.  If you want something that really gives shallow depth of field, or you want that nice extra speed of the faster f/1.2 aperture, then the 56mm is the lens for you.  If you value compact light weight size as the primary motivation, or if you simply want a more affordable lens, then the 50mm f/2 is the lens to have.  There is something to be said for focal length as well.  I prefer the slightly longer 56mm focal length on the faster lens, but others may prefer a slightly shorter prime.  In any case it’s hard to go wrong. For my use, the 56mm f/1.2 will keep its spot in my bag.

So, a lot of people, including several in the comments, have been wondering why my test shows the 56mm f/1.2 to be sharper in the center than the 50mm f/2, while the recently released review over at Lenstip.com shows that the 50mm f/2 is the sharpest Fuji lens they’ve ever tested.  Well, there are a few reasons to discuss, and then some speculation.

First, the thing a lot of people are looking at is the comparison between their resolution numbers for the 50mm f/2, when viewed against their resolution numbers for the 56mm f/1.2.  Now, first of all, for a fair comparison, you’ll need to look only at the 16 megapixel graphs, as the 56mm was never tested on the newer 24 megapixel sensor, as it was in my test. Looking at these numbers, you can see a few things.

What you can also see are some discrepancies with my test.  The big ones being: my 56mm f/1.2 seems to perform significantly better than theirs in the corners at wide apertures.  This could be a function of any number of things, and without seeing their test setup or the individual lenses they used, there’s no way to know exactly why.  It could be that the 56mm performs a bit worse at whatever focus distance they used, or that simply their 56mm f/1.2 was decentered or was a poor copy.  It’s also possible that their copy of the 50mm f/2 was better than the one I had.  There is copy to copy variation, and while it generally is pretty slight, it may play into this.  However, we lack data from Lenstip at 24 Megapixels, which my test was performed at.

In any case, I stand by the results in my test, as I took multiple runs with each lens, with careful focusing and flatness to plane.  It is always important to understand that lens reviewers, from simple sites with one person like mine, all the way to big sites like DPReview, generally only test one sample of a lens. Some luckily get to test a range.  If I had the time, when I still had the 50mm f/2 in for review, I would have done another test on my X-E1 to see if the images looked similar, or if they were closer to what Lenstip showed.  I will say that from my own experience, the 56mm f/1/2 does get a little weaker in the corners at further focus distances, so this whole thing may boil down to focus distance.  I chose 1.3m as it’s a pretty good portrait focus distance, and these lenses are geared towards portraiture (though of course can be used for anything).

Take this test, along with Lenstip’s excellent reviews, as one data point each.  It’s always good to gather information for multiple sources in order to obtain a consensus.  I hope that this simple test was at least a little helpful. As I stated before, I think that both lenses are really good lenses, and the choice between them boils down to speed, cost and size. It’s really hard to go wrong with either lens.