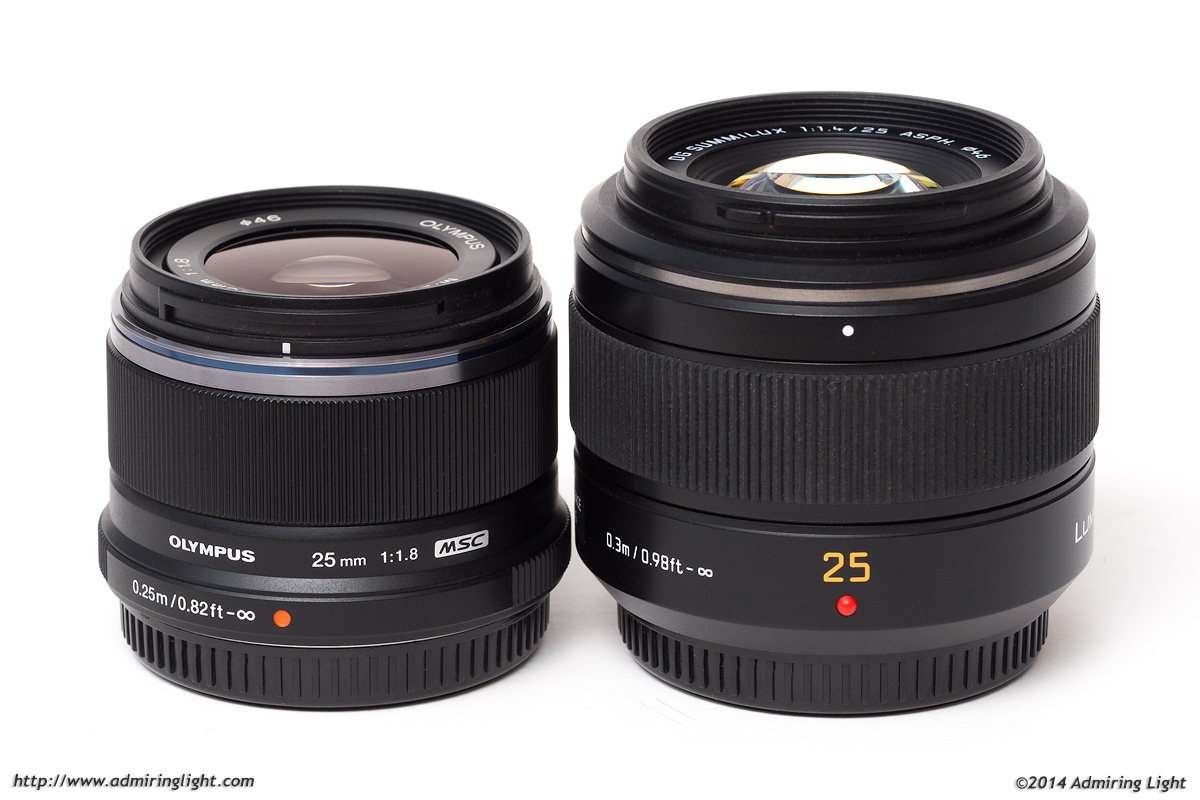 Another lens battle today…just a quick one.  I have the new Olympus 25mm f/1.8 in for review this week and I thought I’d put it up against the venerable and outstanding Panasonic Leica 25mm f/1.4 DG Summilux.  These two lenses are both priced relatively similarly, given the difference in maximum aperture.  The Olympus comes in at $399, while the Panasonic Leica charges a bit more for that 2/3 stop of extra light, at $529.

The normal prime space in Micro 4/3 is becoming a crowded area.  On the wide end of normal, Panasonic has had their excellent pancake design 20mm f/1.7 for years.  They later released the Leica branded 25mm f/1.4 tested here.  That lens has been a mainstay in the system for some time, and really the only choice for a 50mm equivalent lens with fast aperture and autofocus.  Voigtländer has also had a player in this range for a few years as well, with the manual focus and very fast 25mm f/0.95 Nokton.  Olympus has been strangely absent from the normal focal range until now, with the release of the 25mm f/1.8.

While the new Olympus sacrifices 2/3 stop of aperture against the Panasonic, it comes with the benefit of being considerably smaller.  The Olympus 25mm is a tiny lens and can easily fit in a jacket pocket.  The Panasonic 25mm f/1.4 is a fair bit larger, but is still a relatively small lens.  The Panasonic (200g) is about 50% heavier than the Olympus 25mm (136g).

Both lenses have very fast and quiet autofocus and both are relatively well-built, though the focus ring on the Olympus 25mm feels a little less robust than the nicely gripped rubber focus ring on the Panasonic.

I’m using a similar setup to many of the other lens battles I’ve tested….a high detail target to provide information on resolution, with a faceted glass decanter in the background to provide specular highlights and help in evaluating bokeh.  The test camera, the Olympus OM-D E-M5, was set on a tripod, triggered with the 2 second self time to avoid movement from pressing the shutter, and in-body IS was set off.  Images were taken starting at f/1.8 and stopping down in one stop increments to f/5.  The Panasonic also was tested at f/1.4.   When switching lenses, the camera was left on the tripod in the exact position while the lenses were swapped out.

Some notes:  As you can see in the images below, despite both lenses being marked as 25mm lenses, the Panasonic Leica has a slightly longer focal length.  I can’t say whether the Leica is longer than 25mm or the Olympus is shorter than 25mm, though in comparison to other lenses I own, I’d lean towards the Olympus being slightly shorter than marked.

As a result on the Panasonic being slightly longer, the 2/3 stop aperture difference between the lenses is actually slightly more significant than would be expected.  Below are the full shots of both lenses wide open.  While the difference in depth of field and background blur isn’t huge, it is certainly noticeable, especially in the far reaches of the background.  As you’ll see in the bokeh comparison on Page 2, the Panasonic seems to enjoy closer to 1 stop of depth of field advantage over its Olympus sibling.

It is worth nothing that this is a single test at a single focus distance.  I have not had a chance to do a formal test at further focus distances, but this test was chosen to give a nice balance between focus distance and shallow depth of field abilities.  Focus distance was approximately 0.7m, which is somewhat close, but well short of the minimum focus distance of both lenses (0.25m for the Olympus and 0.3m for the Leica).

Below are 100% crops taken from the center and near the upper right corner of the image frame.  As the Panasonic is slightly longer, the corners don’t exactly match up, but that isn’t fully required for evaluation.  To see the crops at full size, click the image, then click the green arrow at the bottom to enlarge to 100%.

At the widest apertures, we have a bit of a split result.  Both lenses are already very sharp from wide open across the frame.  This is, in and of itself, a very nice result for both lenses.  However, the Leica 25mm shows slightly higher resolution in the center, even at f/1.4, (and more noticeable by f/1.8) than the Olympus 25mm.  However, as we get to the edges, the Olympus takes the lead, with a clear advantage in the corner at f/1.8.  The Olympus’ cross frame sharpness at f/1.8 is rather remarkable.  There is extremely minimal falloff in resolution as you get to the edges.

As we get to smaller apertures, the Panasonic retains a slight lead in the center at f/2.5, but by f/3.5, the lenses are just too similar to worry about.  Likewise in the corners, the Olympus stays visibly sharper throughout, though by f/3.5 the differences are extremely small.

Overall, the two lenses are both very sharp at all apertures, with the Panasonic having a slight edge in the center and the Olympus having an edge towards the image borders.

One other thing that is visible from these crops is the relatively higher level of vignetting on the Olympus.  While both lenses are notably darker in the corners wide open, the Panasonic eliminates most of that corner shading by f/1.8, while the Olympus has to be stopped down much further to bring the vignetting to negligible territory.

Let’s take a look at how out of focus areas are rendered: