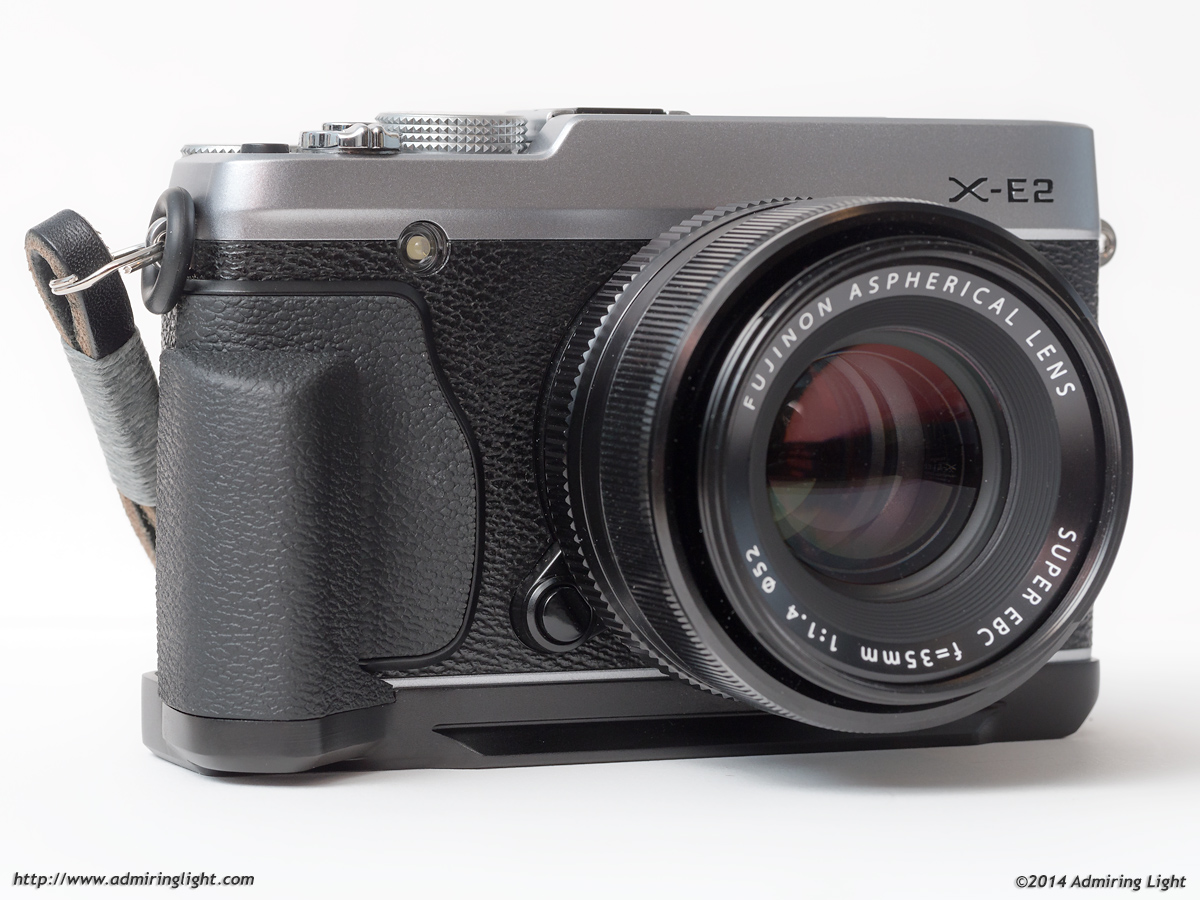 When Fuji announced their new ultra-wide zoom lens in mid-December, they also quietly announced new add-on grips for the XE series cameras and the X-Pro 1.  The new X-T1 has a similar grip as well.  While similar in design to the original grips released for the X-E1 and X-Pro1, the new MHG (Metal Hand Grip) series fixes the one major flaw in those original grips:  They had to be removed to change the battery or access the memory card.  As such, they became a fairly big hassle to use on a daily basis.   The new grips provide an access hole for the card and battery door as well as a very nice bonus for shooters using tripods with Arca-Swiss style quick-release heads: a built-in A/S dovetail.  Today I’ll do a quick review of the MHG-XE for the X-E1 and X-E2.

The MHG-XE grip is quite a solid piece of kit.  The bottom plate and grip connection are all solid milled aluminum with a coated black paint finish.  The original Fuji handgrip had a little bit of flex and tightened up to the bottom with a pivot pin to prevent the grip from moving.  With the MHG-XE, there’s no need for the pin, as the entire base of the camera sits in the plate of the grip.

A tightening nut on the bottom affixes the grip to the camera using an included Allen wrench.  In the hand, the grip feels sturdy and good in the hand.  Fingers roll easily around the grip, with the middle finger resting on top of the grip handle.  Overall, the MHG-XE is nicely built and solid, and when attached feels like an extension of the camera itself.  It doesn’t feel as nice as a fully integrated SLR-style grip, but it does add some additional stability and steadiness, especially when using larger lenses.

This is just an added grip, but Fuji has put in two very nice features.  The first is one that should have been included in the original grip for the X-E1: an opening in the base plate to allow access to the battery and memory card without removing the grip.  The cutout in the base of the plate is perfectly cut out to allow the battery door to open, and is sloped back to allow the door to use its full range of motion.  I do feel they cut out a little too much on the back edge, though, as it creates a slightly sharper than needed edge.  In use it didn’t pose much of a problem, but it may depend on your hands and how you hold the camera as to whether that edge will be uncomfortable on the heel of your hand.

The only other thing that is of note with the battery cutout is that it does make it more difficult to actually pull the memory card out of the base of the camera.  There’s just less room for your fingers, which really can’t be avoided.

The other feature that is a very welcome addition is the integrated Arca-Swiss dovetail.  The base plate of the grip flares slightly at the front and the back to allow the camera to be mounted to any Arca-Swiss style quick release clamp.

As one who has used A/S quick release clamps on my ballheads for years, this is a great feature.  There’s no need for additional tripod plates.  It also helps make the price a little easier to swallow. Custom Arca-Swiss camera plates from makers like Kirk Photo and Really Right Stuff generally run around $60 on their own.  Really RIght Stuff makes their own grip for the Fuji XE cameras that costs $190, though it also includes an L-bracket for vertical shooting.

The MHG-XE worked quite well with my ballhead, which is a PhotoClam PC-33.  This ballhead clamp does have an anti-slip post on the clamp, which does interfere with the perfectly flat bottom plate.  As such, I need to slide the plate over to the left to allow that post to fit into the cutout for the battery door.   This won’t be a problem with most A/S clamps, however.

Those looking for an official Fuji grip will be curious if the new MHG is worth the extra $50 it costs over the original HG-XE1.  Overall, the new grip is a little better built, and is much more convenient to use due to the ability to access the battery and memory card without removing the grip. In my opinion it’s worth it if you are considering the original grip.   If you have an Arca-Swiss style tripod head, the extra cost for the MHG is a no-brainer, as it costs the same as adding an additional plate for the camera anyway.

Overall, Fuji righted a wrong with the MHG-XE, providing a solidly built grip that allows access to the battery door while adding a very nice feature in the integrated Arca-Swiss dovetail. It’s a pricey accessory at $129.  It’s not going to be for everyone, but I think it’s worth it if you want a little better hold on your X-E1 or X-E2, especially if you use an Arca-Swiss tripod head.  I’m not going to tell you it’s a good value, but it is a nicely made accessory that serves its purpose well with no major downsides.