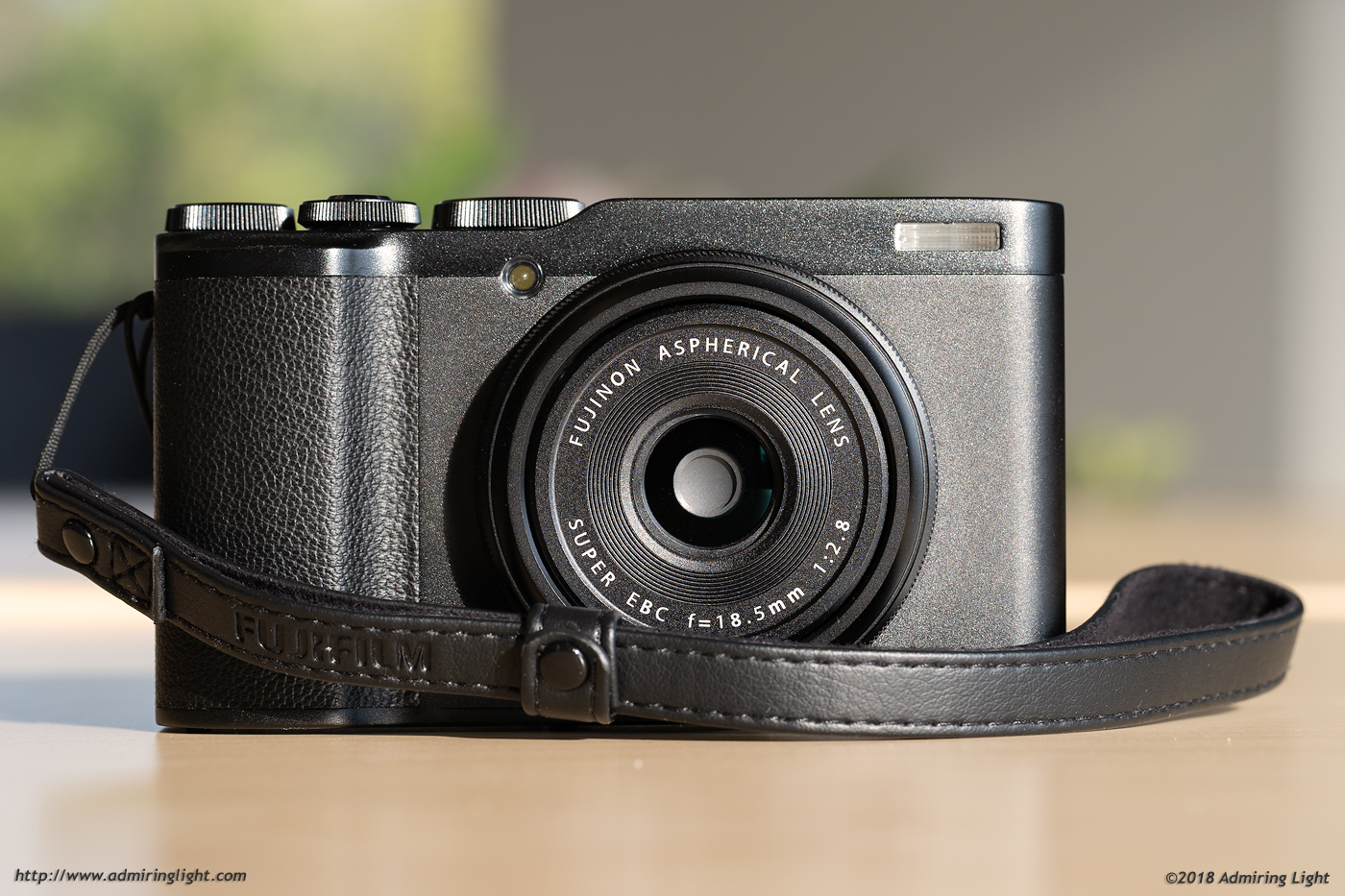 Fujifilm’s X Series has become a fairly nice success for the company, with the interchangeable lens camera system continuing to grow and improve. However, Fujifilm’s digital renaissance really began with the X100, a relatively compact prime-lens compact with an APS-C sensor. That camera’s legacy lives on with the X100F, but Fujifilm continues to experiment with even more compact options, first with 2015’s X70, and now with today’s reviewed camera, the XF10. The XF10 is a sort of slightly smaller and less expensive X70, with a few features removed, but also a few nice improvements as well. The XF10 seems poised to be a great option for traveling extremely light while still having a machine that can produce quality images. Let’s dive into the specifics.

Before we begin in earnest, I wanted to talk about how I use the XF10. I bought the XF10 to be my pocketable camera with a big sensor. I had contemplated picking up an advanced compact at several times over the past year, such as Sony’s RX100 series or Canon’s G7X series, but the value for the image quality never really felt right to me. With the XF10, Fuji has struck a nice balance, hitting a desirable sub-$500 price point while keeping a large sensor for quality imaging. It intrigued me and I picked one up to take on a recent trip to Guatemala. This isn’t ever going to be my only camera, but I think it can make a lot of sense when you want something that can fit in your pocket and not sacrifice too much on quality.

The XF10 takes its main design cues from the X70 that preceded it, though I wouldn’t call the XF10 a direct successor to the X70, just a sort of little brother to it.  The two cameras share the exact same width and height, the same 18.5mm f/2.8 lens, and many similar features, but the XF10 manages to slim down the width by apparently shifting the sensor plane deeper into the camera and recessing the lens further into the body.  Also, the XF10 lacks the X70’s tilting screen, which further slims the camera down, resulting in a body that is a few millimeters thinner than the X70. The XF10 easily slides into my front jeans pocket, though wearers of skinny jeans will not be able to make that work. However, it will fit in to most any jacket pocket with ease, and will work well for any small hip case meant for compact cameras.

The XF10 is a very light camera, constructed with what feels to be a polycarbonate main body with metal top and bottom plates.  It feels like a thin aluminum on the top and bottom.  There is no flex anywhere in the camera body, and buttons are generally clicky and responsive.  While the body looks and feels rather well assembled, my XF10 does have a slightly misaligned seam on the bottom of the camera that causes a bit of a rough edge when running your finger along the bottom left edge.

Despite its compact form factor, the XF10 has rather good ergonomics for a tiny camera.  The front grip is small, but well-shaped to provide a nice place for your fingers to hold on to, and the shape and grip of the rear thumb rest is perfect, allowing for a very secure hold on the camera.  It’s still fairly cramped when compared to a larger camera, but Fujifilm did a very nice job making a tiny camera feel comfortable to use.

The XF10 eschews the hotshoe featured on the X70, though given its intended use case, I don’t see it as a big loss.  The rear screen is a 3″ fixed touch screen LCD with 1 million dot resolution.  It’s fairly clear and was bright enough for me in the majority of shooting situations, though can be a little hard to see in direct sunlight.  The touch operation works fairly well, though you still can’t navigate menus via touch.  I especially missed this when using the Q menu. The one area where the screen lacks is in dynamic range, as highlights appear clipped earlier on the rear screen than they do in the file, and as such, I learned to rely on the histogram for my highlight exposure rather than the image preview.

The XF10’s lens extends slightly when powering the camera on, and you must steer clear of the lens when this operation occurs, or the camera will throw an error at you and make you turn the camera off and on.  You won’t usually touch the lens, but given that the XF10 features a standard pinch lens cap, you have to train yourself to either remove the cap before turning the camera on, or to wait until the lens is fully extended.  While I’d much prefer the lens to have a built-in protective cap that automatically retracts, such as those on the Sony RX100 series or the Ricoh GR series, in practice it wasn’t a major deal for me.  Fuji nicely provides a cap with built-in tether that can be secured to the wrist strap, so the lens cap is never lost and always within reach.

Speaking of the wrist strap, Fujifilm has seen fit to include a rather lovely leather strap with the camera.  I normally replace neck straps included with my mirrorless cameras with wrist straps, (generally leather ones from Gordy’s Camera Straps) but there’s no need to replace the one included with the XF10.  It’s a thin, supple and very flexible leather strap (whether it’s real leather or not, I can’t be sure, but it feels great), with a faux suede lining that goes against your wrist.  It is comfortable, secure, and flexible enough to fold up in very small belt bags with the camera.  It’s a very nice touch that I frankly didn’t expect.

While the overall aesthetic of the XF10 is similar to the X70, the controls of the two cameras are quite different.  The X70 operated truly like a shrunken X100, with the standard Fuji aperture ring, shutter speed dial and dedicated Exposure compensation dial. The XF10 reverts to a simpler control layout, removing the aperture ring, installing a standard PASM dial in place of the shutter speed dial, and changing the dedicated EC dial to an unlabeled dial that changes function with the selected mode.  The rear dial is also gone, but Fujifilm has added a front control dial around the shutter button.

In aperture or shutter priority, the front dial controls the aperture or shutter speed, while the top rear dial controls exposure compensation. In manual mode, the front dial controls aperture with the rear taking control of shutter speed.  There is a third dial-like control on the camera in the form of the multifunction control ring that surrounds the lens.  This ring does not have detents, so spins freely.  It smoothly operates, but in another slight hint of some cost savings, the ring brushes against something internally when spinning and creates a small friction noise occasionally when turning. You can set this ring to control a number of things, from the digital teleconverter, to ISO, to manual focus.  I typically left it to do manual focus in my shooting.

On the top of the camera, in addition to the three dials discussed earlier, sits the power button as well as a single function button.  This button is not positioned for one-handed use, and so is better served by assigning a function that is not commonly used on the fly.  I set it to switch the camera into the snapshot focus mode, which I’ll get into when I discuss autofocus.

The rear of the camera looks quite different from the X70. In place of the four-way switch, the XF10 gains a joystick control, that functions both as a means to easily move focus points, as well as taking over the navigation duties that the 4-way buttons were used for. This is the same joystick that is present in the X-T2, X-T3 and X-Pro 2, and moves focus points with ease.  It can be pressed to quickly re-center the focus point if desired.

There are the standard Menu/OK and Disp/Back buttons on the lower part of the rear, with two buttons on the thumb rest: Fuji’s Q menu button and another programmable function button. I set this button for ISO changing, which I could then select using either the joystick or the front dial.  Two other buttons sit above the LCD screen for image playback and drive mode selection.

In addition to the physical buttons, Fuji has added a few other controls that can be accessed via the touch screen.  On the right side of the touch screen sit soft buttons to toggle AF touch control, film simulation and AF mode.  The latter is both convenient to access, and positioned in a way that I found myself occasionally changing focus modes with the heel of my hand when reaching for the playback button.

There are also four programmable flick gestures that are activated on the touch screen by quickly swiping up, down, left, or right to activate one of four functions. These work well once you learn how to activate them, but it took a bit of practice to get the quick, short flick to work as I’d intended. It is nice to have added functionality, but I’d rather have the ability for a slide out soft button drawer, similar to what Panasonic does on their cameras.

I think Fujifilm did a pretty nice job with the controls of the XF10.  I was able to set up the camera to allow for quick access to most of the controls that I wanted, but I do wish there was just one additional function button on the back.

The menu system is the same as the older X-T1 and X-T10 series cameras and is well laid out and organized well, though it lacks the useful ‘My Menu’ item featured on Fujifilm’s more recent cameras.  Fuji’s Q menu, which allows for 15 settings to be quickly accessed is here as well, and is programmable, though some functions aren’t available to be placed in the Q menu. I’d like to have the digital teleconverter, which allows for framing with 35mm and 50mm equivalent fields of view, available in the Q menu, for instance.

In all, Fujifilm packed a lot of customizability and placed the controls quite well on the XF10.