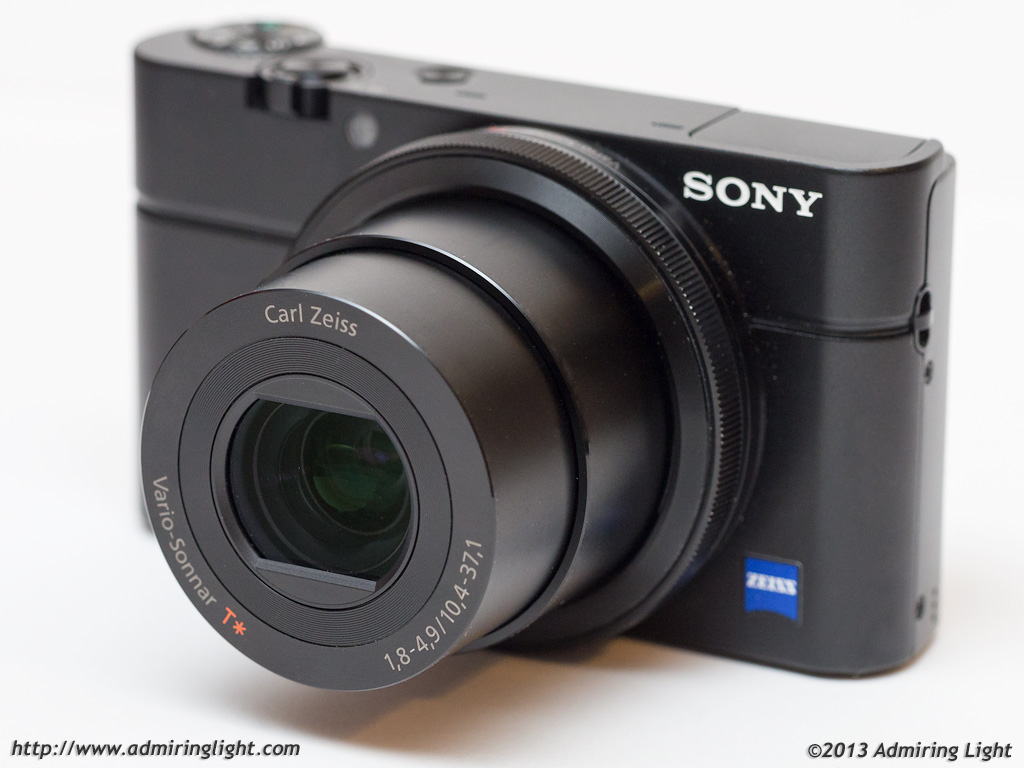 Sony has been making a splash recently with its small camera offerings. While I’ve never previously been a fan of Sony’s compact digital cameras due to their horrible sensors, they’ve done some amazing things with their SLRs and later their excellent NEX line of cameras.

Now Sony is finally bringing their class leading sensor technology from their interchangeable lens cameras into the compact space with their high end RX100. There are actually two cameras in the RX line for Sony, with the other being the expensive, but rather incredible full-frame RX1. The RX100 shares some design cues with the RX1, but comes equipped with a relatively standard range zoom lens. The RX100 retails for $650 in the US.

The RX100 lens is a 10.4-37.1mm zoom, covering a field of view similar to that of a 28-100mm lens on a full frame camera. The lens has a relatively fast aperture of f/1.8 at the wide end, going to a more mediocre f/4.9 at the long end of the zoom range. Still, this range will cover the majority of situations. The lens is optically stabilized and projects its image on to the RX100’s 20.2 megapixel 1″ image sensor – a little smaller than that in the Micro 4/3 line of cameras, and the same size as Nikon’s 1-series mirrorless system. 1″ sensors seem to be emerging as a great size for high image quality while keeping the size of the camera at a minimum.

If you’re not familiar with my reviews, I review from a real world shooting perspective. You won’t find lens charts or resolution numbers here. There are plenty of other sites that cover those. I review products on how they act for me as a photographic tool.  I am not a videographer, so my reviews concentrate on the still imaging capabilities of a camera. Also, I would like to thank my friends at LensRentals.com for providing the camera for this review. Please visit them whenever you need a lens for that once in a lifetime shoot, or just if you want to try a lens out without having to buy it first.

The RX100 is a surprisingly small camera given the relatively large sensor hiding in side. With the lens collapsed, it only protrudes about 5mm from the body of the camera. It easily slides in a jacket pocket. It’s also a very robustly built camera, with the entire body made of aluminum. The front of the camera is dominated by the zoom lens, and the rest of the front takes on a very minimalist and attractive design. There isn’t a lot of room to grip the camera on the right side, and the front of the camera lacks any sort of grip material. The camera comes with a neck strap, but I don’t see any reason you would want to use a camera this small with more than a wrist strap, so I wish the camera was a little grippy.

In some ways, the grip is a little too small. There would be some ergonomic benefit to having the grip side be a little bit wider, and even a small finger grip would be appreciated here. Still, I never dropped the camera while I was testing it, and over the week I shot with it, I eventually adjusted and found a grip that was relatively comfortable and secure. Around the lens is the front control ring, which can control one of the exposure settings depending on the mode you select. Predominantly, I used it for aperture control while in Aperture priority. It has a good resistance to it, but isn’t perfect in implementation, which I’ll get to in a bit.

The rear of the camera is mostly taken up by the large 3″ LCD on the rear of the camera. The camera is unfortunately not touch sensitive, which would have been very welcome given the small size of the camera. There are four buttons surrounding the rear dial, with a button in the center of the dial. A movie recording button sits up and to the right of the thumb rest, thankfully recessed to prevent accidental pressing. I found the rear controls, while small, to work rather well, and were easily accessed.

The top of the camera features the shutter button, which is surrounded by a typical zoom rocker switch, along with the on-off button and the Mode Dial. The mode dial has a pretty strong resistance which makes it difficult to accidentally bump out of position. The left side of the camera is where the recessed pop up flash resides.

Overall, the camera is well laid out and feels good in the hand. The RX100 walks a fine line of good controls while maintaining a very compact size. While not perfect, Sony did a very good job, and it toes that line well.

In most respects, Sony has done a very good job with the RX100 when it comes to controls.  There is a lot of customization possible for the function buttons as well as the dials.  Unfortunately, there are also some restrictions, some of which do not make any sense.  For instance, when in aperture priority mode, you can set the front ring to be aperture, but you can’t set the rear dial to act as exposure compensation…by default, it too retains the aperture adustment.  You can set the front ring for exposure compensation and the rear ring for aperture, but that frankly makes little sense.  Luckily, because of the ability to customize the rest of the interface, you can quickly make most important settings just one click away.

After you get the camera set up to your liking, it really becomes quite quick and easy to shoot, and by the time I was ready to send the review unit back, I had become quite comfortable with the camera.  It’s not without some other flaws, however.  The front ring lacks any clicks, which means you either have to pay careful attention to the back of the screen, or you need to turn on camera sounds to hear clicks through the speaker.  I also did not like the way settings were displayed on the rear LCD when changing them.  When turning the rear dial or front ring, an overlay showing the parameter you are changing will pop up.  It shows the settings in a wheel shape, and it is meant to correspond to the movements you make were the marking directly on the wheel you are turning.  You’d think this would be intuitive, but because the markings are not on the dial itself, it made a disconnect for me.  For instance, seeing f/2, f/2.5, f/2.8 on the virtual dial, with f/2.5 in the center for my current setting, you turn the wheel counter-clockwise (or ‘left’ in most people’s mind) to go to f/2.8…the item on the RIGHT.  This is how it would work if you were spinning a real aperture ring, but ALL other software settings on any camera I’ve ever owned in the history of cameras, has you going counterclockwise moving to the setting on the left and clockwise moving to the right.  I never really became accustomed to this.  Still, it’s a minor nitpick and the overall operation of the camera was quick and fluid, with easy to follow menus and a vast array of options.

Autofocus and Image Stabilization and other features

The RX100 features a contrast-detect autofocus system like almost all compact digital cameras, but the AF on the RX100 is significantly faster than your average compact.  It also smokes the other prominent 1″ sensor compact (Canon’s G1X) in this department.  Autofocus was nearly as fast as the fastest compact system cameras and DSLRs, and accuracy was excellent.

The RX100 features an optically stabilized lens that in practice gave me between 1-2 stops of extra handholdability.  Not really the greatest performance, but certainly better than nothing.

Also, the RX100 features a continuous burst rate of 10 frames per second, which is quite impressive for a compact camera.  I didn’t get a chance to test its continuous autofocus in this mode, however.

The flash on the RX100 is a tiny pop up flash that is useful primarily for fill-in flash due to its small size.  If you up the ISO and tilt the flash back, you can even use it to bounce off the ceiling, though it’s not powerful enough to really make this a great feature.  Flash exposure was accurate, however, and it is a useful feature to have on board.