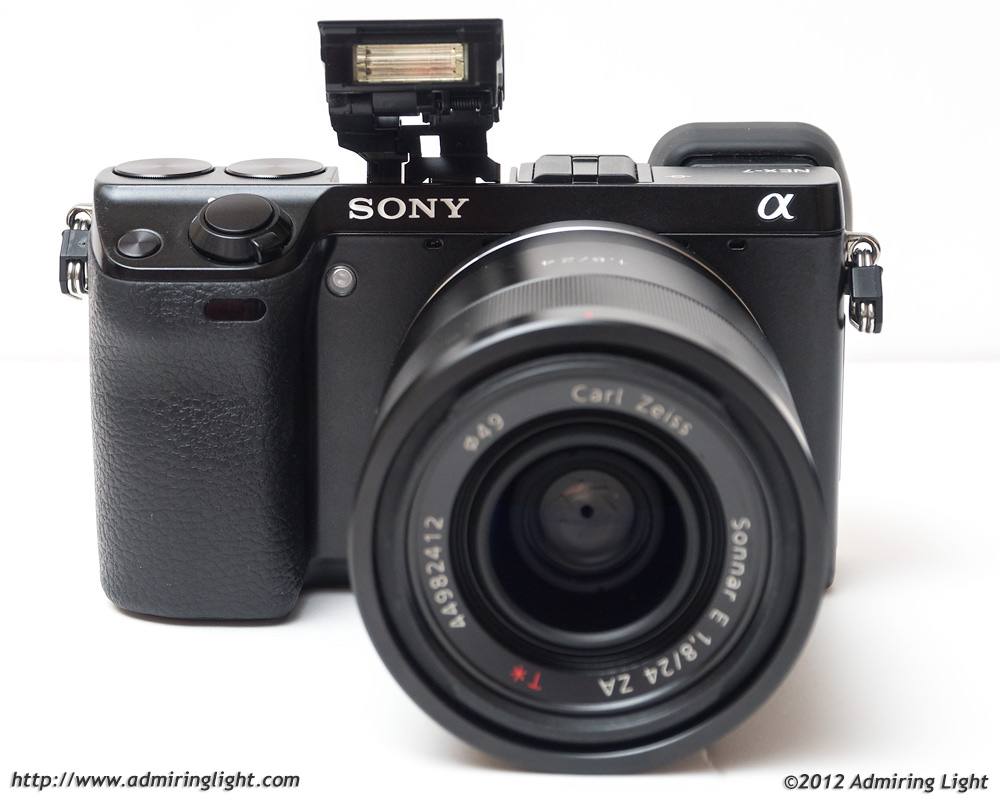 The Sony NEX-7 has been out for quite a while now, but it still sits atop the NEX line of mirrorless Compact System Cameras in the flagship position. It features a 24 megapixel APS-C sensor in a very tiny body, and for many people was somewhat of a ‘holy grail’ camera when it was released last year. This is the first NEX body I’ve had a real chance to put through the paces, and my friends at LensRentals.com were kind enough to loan me an NEX-7 body and the Zeiss 24mm f/1.8 for review. I also purchased a Konica AR to NEX adapter so I could use a few of my Hexanon lenses, with a particular eye towards my 57mm f/1.2, which would make an ideal portrait lens for the NEX-7.

So, having used the Micro 4/3 system for quite some time, would the NEX inspire envy? Let’s take a look:

If you’re not familiar with my reviews, I review from a real world shooting perspective. You won’t find lens charts or resolution numbers here. There are plenty of other sites that cover those. I review products on how they act for me as a photographic tool. Also, I would like to thank my friends at LensRentals.com for providing the camera and lens for this review. Please visit them whenever you need a lens for that once in a lifetime shoot, or just if you want to try a lens out without having to buy it first.

The NEX-7 is a small camera, though the largest of the NEX bodies. It is basically a rectangle with a lens mount and a protruding grip. The design of the camera is starkly minimalist, which you will either really like or find boring. The grip is large and chunky, and contains the shutter release, power switch and one of the function buttons that can be reassigned. The top of the camera features the two large programmable dials, primarily used for changing shutter speed and aperture, as well as the NEX-7’s proprietary hot shoe and the pop-up flash.

The rear of the camera has two buttons that operate on-screen items, and the menu dial with a four way switch and center button. The video record button sits to the upper right. An interesting item on the rear is the switchable button, which allows you to switch functions between AutoExposure Lock and a manual focus toggle. To the left of this is the image review button and the pop up flash release.

Sitting in the upper left corner is the NEX-7’s electronic viewfinder. This is a high resolution 2.4 million dot EVF that adds no bulk to the camera, save for the small protrusion of the eyecup. The rear screen is a 3″ 16:9 aspect ratio monitor that tilts up or down in nearly the exact same way as the Olympus OM-D E-M5’s screen does. The 16:9 aspect ratio is well used, as during still capture, the 3:2 aspect ratio image from the sensor is displayed shoved to the left, while a display of the current functions of the rear controls is put to fill the remaining space on the right. It works well, and makes good use of the space.

The camera is very well built, with a solid magnesium alloy body and tight tolerances. It feels reassuringly solid in the hand. The squared off grip is wonderful for many people, but, at least in my hands, I found it uncomfortable in practice. No matter what grip I tried, it either felt too thick or oddly shaped. My fingers felt crammed into the space between the grip and the lens mount, and the lack of curvature on the grip was uncomfortable. I would have much preferred if Sony had taken a little width out and rounded the grip off a little more. It would have added considerably to the comfort of the camera in use.

All the dials and buttons are easily accessible, though the video record button is placed in a manner a little too easy to bump. However, a recent firmware update has allowed the user to lock that button to prevent accidental pressing. When I first started using the camera, I found myself changing the ISO accidentally, as I had set it to be on the rear control wheel. The rear wheel spins VERY easily, and it was far too easy to bump. Luckily that front button next to the shutter release allows one to lock the rear controls if desired. I did so, and assigned the ISO control to the right point on the four way controller, allowing for much less accidental changing of those settings.

The NEX-7’s viewfinder position is a mixed bag. I loved the upper left positioning when shooting in landscape orientation, as it avoided the ‘nose on screen’ smearing that can happen with other cameras, but in portrait orientation, I found it awkward, as it sits too low on the camera. I also noticed that in either orientation, it doesn’t allow you to stabilize the camera against your face as well as your typical DSLR or CSC with a more centered viewfinder, as the camera tends to pivot around that contact point.

As I mentioned before, the NEX-7 is a small camera, but it’s not too small. It’s roughly the same footprint as the Olympus OM-D E-M5, as seen above, though the Olympus is taller due to the hump containing the EVF and Image stabilization sensors. The NEX manages to cram it’s EVF into the main body of the camera, keeping a lower profile. I think the NEX manages a very nice balance of size and ergonomics, and think the body is well sized. Due to the larger sensor, the lenses for the NEX system tend to be a bit larger than those on Micro 4/3. Below shows the difference in size between the Zeiss 24mm f/1.8 and the diminutive Olympus 12mm f/2. The overall NEX package is still relatively compact and surprisingly lightweight, but compared to Micro 4/3, you’re probably going to be carrying a larger bag.

Next: Operation and Performance