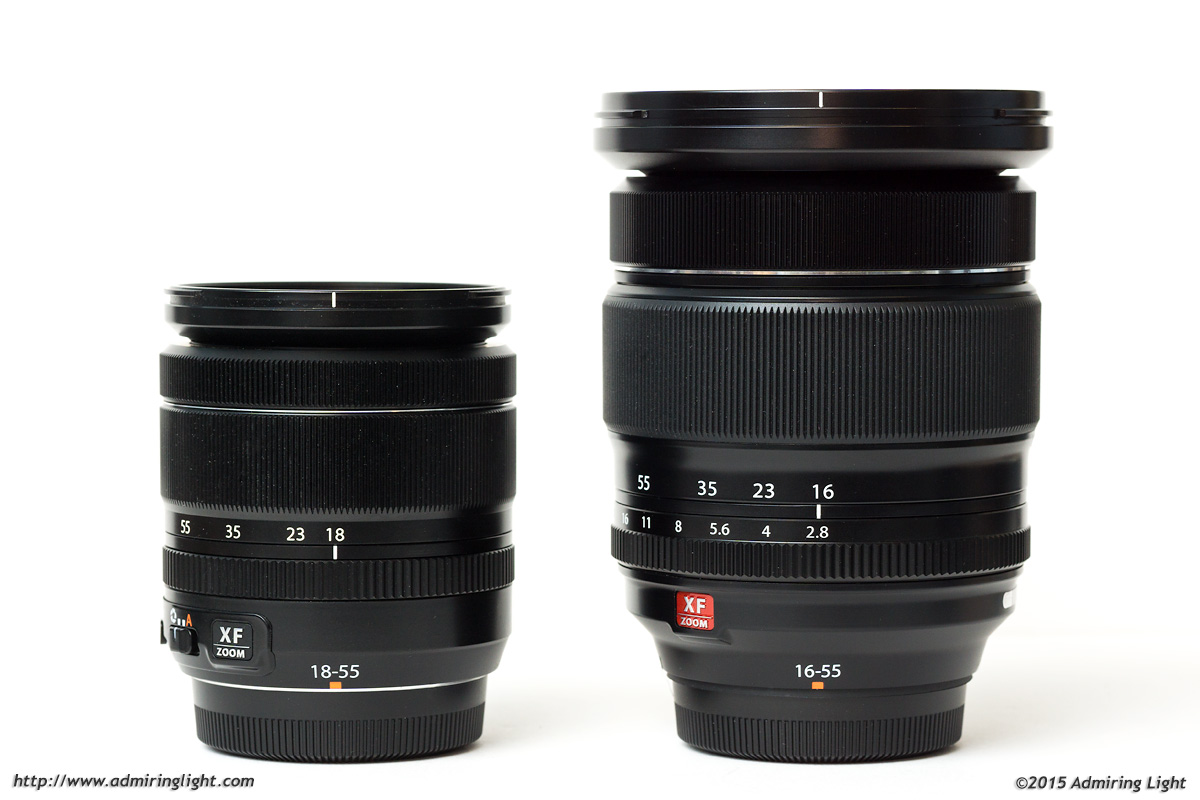 Fuji’s brand new pro-grade standard zoom, the XF 16-55mm f/2.8 WR, has just been released.  It’s a fast weathersealed lens that promises excellent optical quality at a premium price.  Fuji has two other standard zoom lenses, and for those considering the 16-55mm, there has been much thought about how much of an improvement can be expected when upgrading to the newer zoom lens from the venerable Fuji XF 18-55mm f/2.8-4 OIS.  The latter lens has been around for a while, and is very highly regarded.  It’s the ‘kit zoom’ that doesn’t perform like a kit zoom.  It’s also fairly close in absolute aperture capabilities as well, with the same f/2.8 aperture at the wide end of the zoom, and slowing to f/4 at the long end of the zoom.  However, the 18-55 carries a few trump cards: it’s significantly smaller and has an optical stabilizer.

The Fuji 18-55mm is a small standard zoom lens with a fairly fast f/2.8-4 variable aperture. The 18-55mm was introduced alongside the X-E1 and has served as the ‘kit lens’ in camera body packages since then. The lens features a solid metal build while remaining quite small and compact.  The lens has an optical image stabilizer that can help with handholding around 2-3 stops slower than you would be able to without the OIS.  The 18-55mm weighs in at 330g, while measuring 65x70mm in diameter and length.

The new Fuji 16-55mm f/2.8 has almost the same focal range as the 18-55, but has an extra 2mm on the wide end, allowing for a more expansive field of view, if only just.  It also is a constant f/2.8 lens, so adds an additional stop of light at 55mm vs. the 18-55mm.  The 16-55mm f/2.8 is a solidly built professional-grade lens with weathersealing, but controversially lacks optical image stabilization.  The 16-55mm is a large lens, weighing in at nearly double the weight of the 18-55mm, at 655g.  It also is significantly longer and wider, measuring 83.3mm x 106mm in diameter and length.

This test looks at performance closer up.  If I have a chance later in the week, I will try to do a test for more distant subjects outdoors.  I put two books at approximately 1m from the camera position, and ensured they were square to the camera.  I placed a crystal decanter in the background to evaluate bokeh.  The camera was mounted on a tripod and photos were taken with the 2 second timer.  Camera position was not changed between exposures.

At 18mm, the new 16-55mm f/2.8 shows a marked advantage in central sharpness at f/2.8, while holding a very slim edge in the image corners.  At smaller apertures, the 16-55mm maintains a lead both in the center and in the corner, though by f/8 the lenses are extremely close to each other.  Interestingly enough, the 18-55mm is a bit sharper in the corner at f/4.  I even retook the 16-55mm images to ensure there wasn’t an error with the f/4 shot, but got the same result.

At 35mm, the two lenses perform extremely similarly.  The 16-55mm holds a very slight edge in central sharpness at f/3.6 (the 18-55mm’s wide open aperture at this focal length), but otherwise the two lenses are essentially a wash here.

Neither lens shows ultra-creamy bokeh, though they aren’t terrible either.  Both lenses show some bright outlining on specular highlights, as well as some onion-ring like texture due to the aspherical elements.  However, the 16-55mm is clearly smoother at both focal lengths and at all tested apertures.  The 18-55mm has a funky double donut look to the specular highlights that doesn’t appear on the 16-55m.  One nice thing is to see that aside from the highlights, the blur does fade gently away for both lenses, which should provide pleasing background blur in most situations.

From this test, it’s clear that the 16-55mm f/2.8 WR is the superior optic when it comes to resolution and bokeh, at least at this closer focusing distance.  The 16-55mm holds a small edge at wide apertures at the wide end of the zoom range and a pronounced advantage in resolution at the long end of the zoom range, while also producing more pleasing bokeh.  Image contrast is also a bit higher on the 16-55mm.  However, it’s worth noting that the 18-55mm does a very nice job stopped down, and at wide apertures from 18-35mm, while producing acceptable images at 55mm and f/4.  The 18-55mm’s significantly smaller size and the fact that it’s optically stabilized and significantly cheaper make it a lens still worth considering for many shooters.  In pure optical quality, however, the new 16-55mm appears to be well worth its pricetag and weight penalty.  I’ll be shooting with the 16-55mm over the next week or so and will have my full in-depth review of this new lens coming sometime next week, so make sure to stop by the site again to check that out.

Buying your photographic gear (or anything) through the B&H link below helps support Admiring Light at no additional cost to you.

Your browser does not support iFrame.