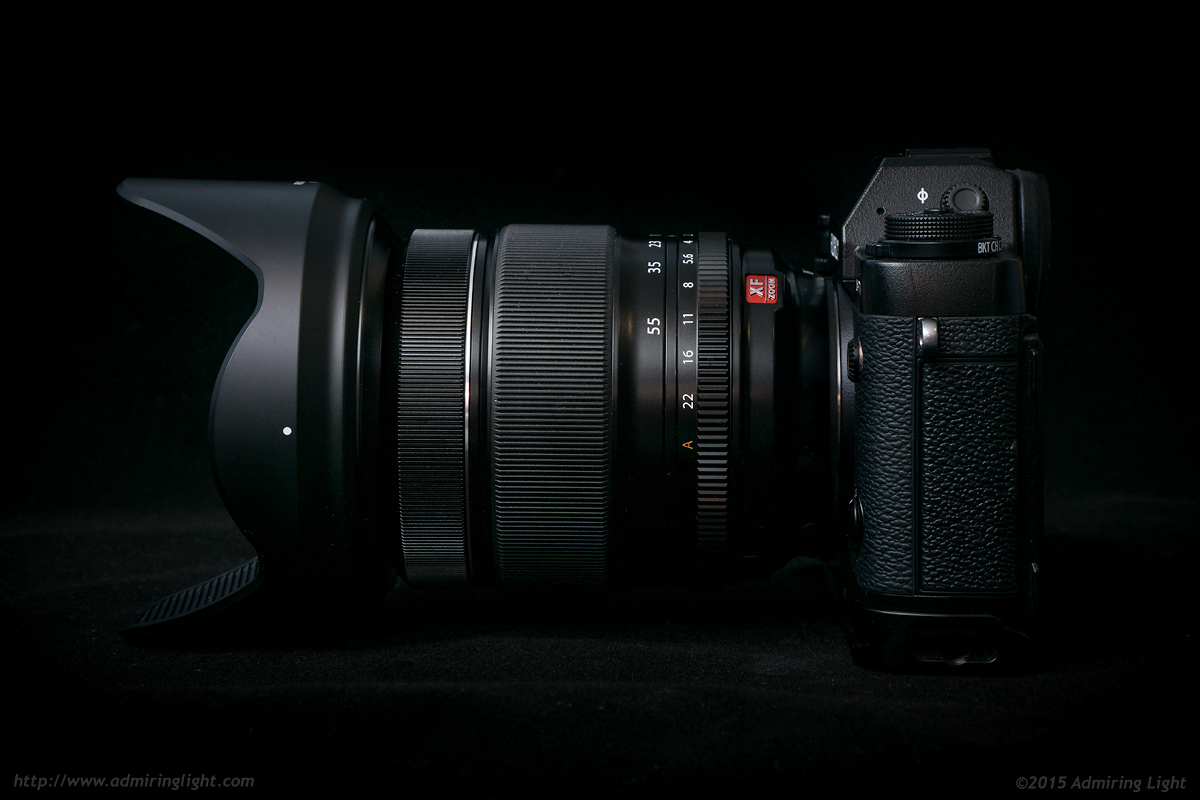 The past year has seen Fujifilm release several new high-quality lenses.  The latest is the Fuji 16-55mm f/2.8 R LM WR.  While the Fuji X-Series has had a relatively fast standard zoom for a few years now, with the 18-55mm f/2.8-4, the 16-55mm fills the need for a constant f/2.8 zoom with a wider 16mm starting point.  The 16-55mm f/2.8 lacks optical stabilization like its older brother, but promises to make up for that fact with exceptional optics.  Fuji seems to have gone all out on the optical design of the 16-55, sacrificing a compact size in the process as well.  The XF 50-140mm f/2.8 released at the end of 2014 has already proven to be a top-notch optic.  Can the 16-55mm follow suit?

The XF 16-55mm f/2.8 is Fuji’s top-end professional-grade standard zoom lens.  It’s apparent that Fujifilm wasn’t particularly set on minimizing size with this lens, as it’s quite large in comparison to its only slightly slower brother, the 18-55mm f/2.8-4, and it lacks an optical stabilizer as well.  However, despite the large size, the lens is well constructed and handles decently on a Fuji body with a substantial grip.  This is a lens for the X-T1 or one of the X-E or X-Pro bodies with the additional handgrip. Fuji includes a nice petal lens hood that reverses for storage, though it does add extra width to an already rather fat lens.

The lens is constructed predominantly of metal, with high-grade plastics making up the extending inner tube of the lens. The rubber-gripped zoom ring operates smoothly and evenly, with no stickiness or zoom creep.  I was surprised by the relatively light damping on the zoom ring, which feels similar to that on the 18-55mm.  I would have preferred a bit more resistance here.  Luckily, both the focus ring and aperture ring have just the right amount of resistance.  The Focus ring is well damped and smooth to operate while the aperture ring is almost identical to the one on the 50-140mm f/2.8, which is a good thing.  It’s nice and firm with solid detents at each 1/3 stop, making it easy to move by difficult to accidentally change the f-stop.

The lens is weather-sealed and has the same air exhaust slots on the bottom that the 18-135mm features, but thankfully doesn’t have the spongy feel to the end of the zoom range like the 18-135 did.  Given that it’s the middle of winter here (and we had a particularly cold stretch during my testing of the lens), I didn’t use the lens in rain, though I did shoot quite a bit in moderate snowfall, and the lens performed admirably.  I’m still not a fan of the ‘surrounding’ rubber gasket at the lens mount, and would prefer one that gets sandwiched against the mount plate.  Still, the lens didn’t allow any moisture into the lens body or camera during my shooting, even after thawing with snow on it.

Overall construction of the lens is fairly solid, though it falls a bit short of the very best built lenses for other systems, and even against the 50-140mm.  There is a very small amount of wobble and flex to the extending lens tube that isn’t present on other lenses I’ve recently reviewed (the Samsung 16-50mm and the Sony 16-35mm).  The lens does extend about an inch and a half at the long end, as seen below.

The 16-55mm features a linear motor that is quite fast and essentially silent.  In good light, focus locks on nearly instantly, and while it slows down slightly in dimmer light, the lens maintains acceptable speed.  I had excellent focus accuracy with the XF 16-55, in both good and poor light.

This paragraph is where I would normally review the optical stabilizer in a lens, which the 16-55mm controversially lacks.  While many pro-grade DSLR standard zooms lack stabilizers, for systems that rely on optical stabilization, the lack of one in this day and age is somewhat unusual.  Fuji claims they removed the OIS system from the 16-55mm to allow for better image quality while still keeping the size manageable.  This may be true, but I wonder about the size differences.  The lens is considerably larger than the 18-55mm f/2.8-4.  That lens is the same speed at the wide end and one stop slower at the long end, but has an OIS unit.  It’s also half the weight and significantly smaller in both length and width.

I do wish that Fuji had included OIS in the 16-55mm, but to be honest, the situations where I wished for a stabilizer weren’t all that common.  Now let’s see if the lens lives up to the hype with regards to image quality.