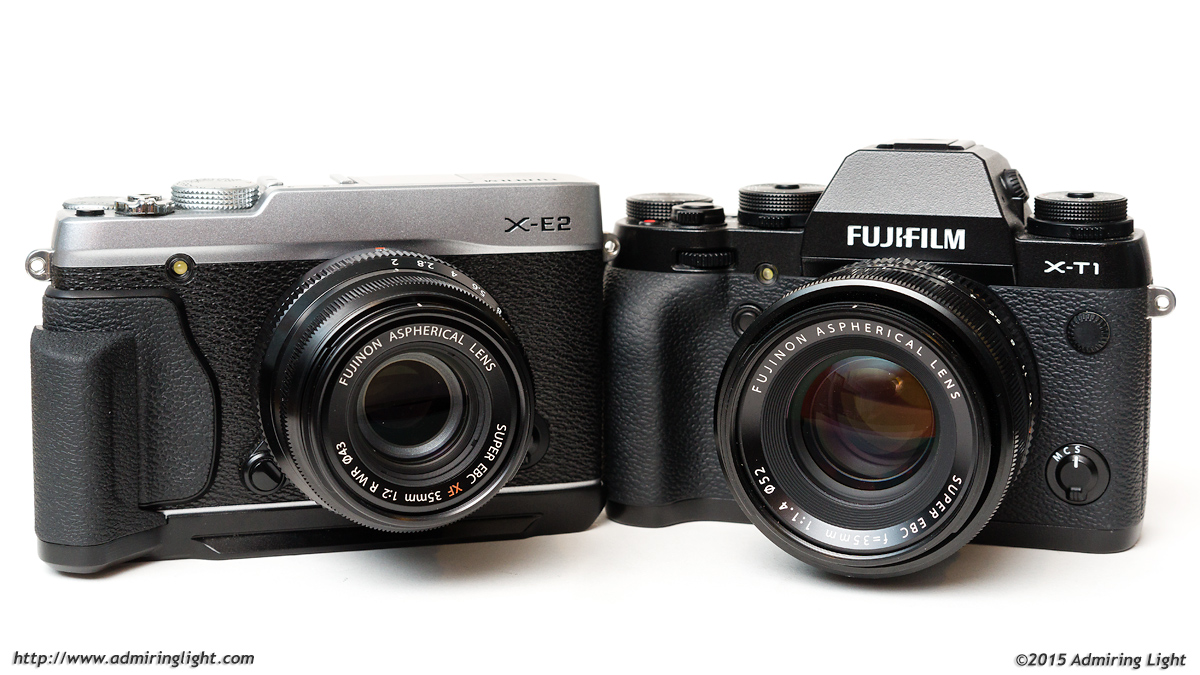 Today, I’m pitting the original lens for the X-Series, the venerable XF 35mm f/1.4 R against the new normal prime, the XF 35mm f/2 R WR, a slightly more compact and weather resistant lens that has just been released for the X-Series of interchangeable lens cameras.  The lenses carry the same field of view and have a one stop difference in aperture.  Which should you get?  Is the new lens better than the relatively good 35mm f/1.4?  Let’s find out.

The two lenses share a lot in common, but differ in several key ways.  Both lenses are constructed with a solid metal shell and are roughly the same overall size.  The new XF 35mm f/2 tapers towards the end of the lens and is very slightly shorter, so it looks smaller than it really is.  The 35mm f/2 is a bit more solidly constructed than its f/1.4 brother, and has some weather resistance as well, but both are well-built.

The biggest physical difference between the two is the focusing system used.  The f/2 lens is an internally focusing lens, so the lens always stays a constant length.  The f/1.4 lens uses an extension focusing system, so the front element will move in and out as the lens focuses.

Mechanically, the focus motor in the 35mm f/1.4 is probably the loudest of all X-series lenses.  The new f/2 lens has a completely silent and very fast focusing motor.  The f/2 is definitely a faster performer in the autofocus department, and in my experience, hunts a bit less in very dim light as well.

For the first test, I placed the camera on a tripod approximately 1m from the target, square to the wall.  I tested whole stop apertures from wide open to f/8, and looked at sharpness and contrast at the center and the lower left edge, while also looking at the bokeh in the background of the frame.  The full scene is below:

First, let’s take a look at the performance in the center of the frame.  Below are 100% crops of the center, where the lenses were focused.  Click on the image to open full size in a new tab.  Make sure to enlarge to full size when viewing the comparison.

Looking at the center performance, the two lenses perform very close to each other.  While the 35mm f/1.4 shows a touch of softness at f/1.4, it sharpens up a fair bit at f/2, and the new XF 35mm f/2 looks to be very slightly behind the f/1.4 lens when both are at f/2.  Stopping down to f/2.8 flips things a bit, with the 35mm f/2 taking a slight lead. By f/4, both lenses are exceptionally sharp, and there’s very little difference at smaller apertures.

Now let’s take a look at the edge.  The crops below were taken from the lower left edge.   As you’ll see, this is where the 35mm f/2 begins to separate itself.

While the center resolution was very similar overall, the edge crops tell a different story.  At wide apertures, the 35mm f/1.4 is quite soft, especially at f/1.4.  It’s not until f/5.6 that things start to show decent resolution, and it takes until f/8 to really be called acceptably sharp.

Meanwhile, the XF 35mm f/2 shows some edge softness at f/2, but even here the lens shows better resolution than the f/1.4 lens does at f/4.  Stopping down to f/2.8 improves things dramatically, producing very good resolution already.  By f/4, the edge at this point is very sharp and the 35mm f/2 maintains a lead across the frame all the way to f/8.

As far as resolution goes, the new XF 35mm f/2 is showing a distinct advantage across the frame at this focus distance, especially at wider apertures.

Finally, we’ll look at the bokeh. Again, click the image below to view full size. The crops below were taken of the specular highlights from lights in a building in the distance.

Looking at the bokeh, both lenses show a very similar drawing style.  The XF 35mm f/1.4 retains a bit more uniform circles at wide apertures, while the rounded 9 bladed aperture of the XF 35mm f/2 shows a rounder appearance to the highlights at smaller apertures. However, the overall character is quite similar.  We’ll call this one a draw.

At this 1m focus distance, the XF 35mm f/2 is showing to be the sharper lens across the frame while maintaining similar bokeh to its older brother.  At this distance, the 35mm f/2 is the superior lens, provided you don’t need that potentially all-important full stop of aperture.  That extra speed gets you lower ISO in dim condition and better subject separation when shooting shallow depth of field. How important those points are to you will help guide your decision.

However, lenses often perform differently near infinity than they do close up, so next we’ll look at distant performance.