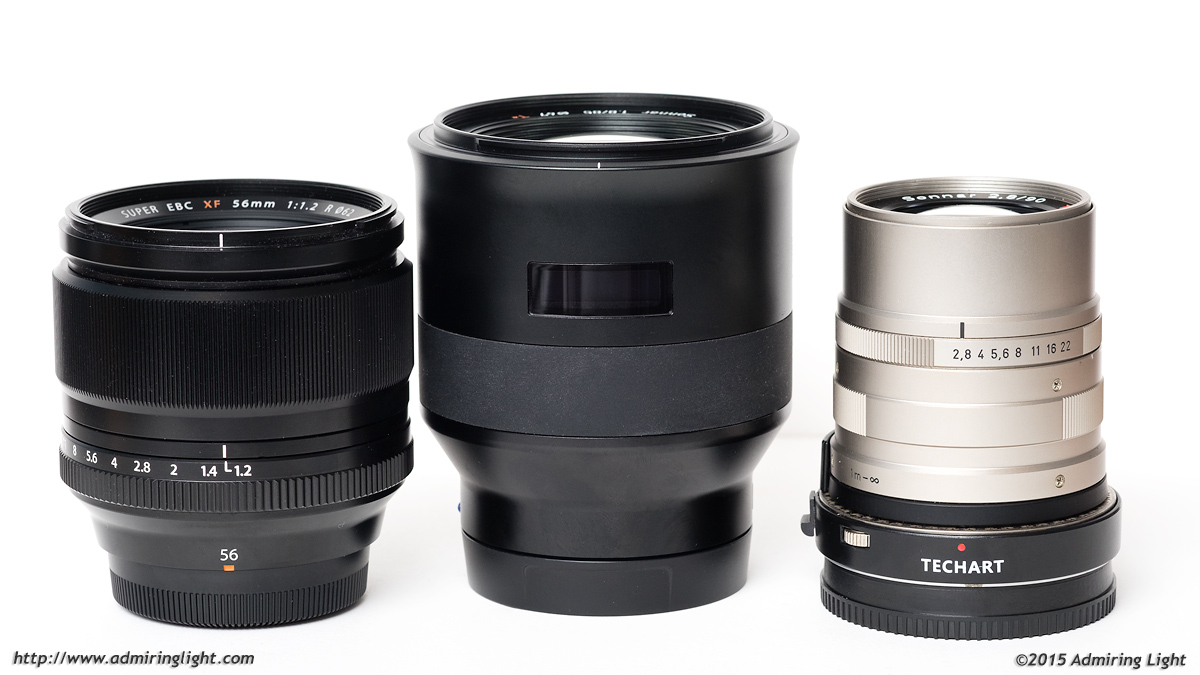 Today we have a quick battle of portrait lenses.  Two of them are current mirrorless portrait primes, both of which are extremely highly regarded.  The third lens is a rangefinder lens from the 1990s that is still considered to be an utterly phenomenal optic. The battle: Fuji 56mm f/1.2 vs. Zeiss Batis 85mm f/1.8 vs. Zeiss Contax G 90mm f/2.8.  The Fuji 56mm f/1.2 (read my full review here) is considered one of the premier lenses of the Fujifilm lens lineup.  The 56mm focal length gives a field of view the same as that of an 85mm lens on full frame, while the fast f/1.2 aperture will yield depth of field similar to an f/1.8 lens on full frame.  In that vein, the second competitor is the brand new Zeiss Batis 85mm f/1.8 Sonnar T* (read my full review here) for full frame Sony E-mount cameras.  This should match the Fuji’s angle of view and capability to blur the background, though of course the Fuji will allow for faster shutter speeds at the same depth of field and same ISO.  The final lens is also a Zeiss lens: the Contax G 90mm f/2.8 Sonnar T*, a rangefinder lens for the autofocus Contax G1 and G2 cameras.  The G 90mm has been very highly regarded ever since its release.  It’s also a Sonnar design, so the two Zeiss lenses should share a somewhat similar design philosophy.

Tale of the Tape:

The tiny Contax G 90mm f/2.8 is made slightly larger than the specifications above by adding the autofocus Techart adapter for E-mount.  Both the Fuji 56mm and Batis 85mm lenses are chunky, but  the Batis is notably larger, though only slightly heavier.  All three lenses are extremely well-built, and all are capable of autofocus, though the Contax G’s autofocus is rather methodical and sometimes prone to misfocus. In this test, the Fuji and Batis lenses utilized autofocus to focus the subject while the Contax G was manually focused to avoid error.

I performed two tests, one of which involved all three lenses.  The second test is just between the Fuji and the Batis, and is less methodical.  For the first test, I simply set up a focus target for the center and edge of frame, with foliage a good distance behind to evaluate bokeh.  All shots were tripod mounted from approximately 7 feet away, a good distance for portraits from the waist up. I took images at roughly full stop apertures from wide open through f/8 on full frame.

For this comparison, I’ve roughly equaled depth of field between the lenses in the compared crops: for example, the line marked f/2.8 / f/4, means that the Fuji was shot at f/2.8 in that row, while the two Zeiss lenses were shot at f/4, providing roughly equal depth of field.  The Fuji 56mm was shot on the 16 megapixel Fuji X-T1, while the two Zeiss lenses were shot on the 24 megapixel Sony A7 II.  For comparison, the Sony files were reduced to match the pixel dimensions of the Fuji image.  This still provides a very slight edge to the Zeiss lenses due to downsampling, but still helps even the fight between the differing camera resolutions.

First, let’s look at center resolution.  Below are 100% crops from the 16 megapixel resolution equalized files.  Click to open the image in a new window and be sure to zoom in to view at 100%.

Looking at these, it’s quite apparent that in center resolution, all three lenses are exceptional.  At wide open f/1.2 (Fuji) and f/1.8 (Batis), the Batis 85mm is showing just a slightly crisper image, and better control of fringing.  The Fuji 56mm still looks extremely good, but shows a very small purple tinge to the black letters and slightly lower contrast.  By f/1.8-f/2.8, the Fuji is a bit sharper than wide open, and is very close to the Batis and slightly sharper than the Contax G, though the two Zeiss lenses still show a bit stronger contrast.  One thing to note here is that the X-Trans sensor array is doing its job in suppressing moire, while the Sony sensor shows some, especially in the Contax shot.

At smaller apertures, the lenses are all simply tack sharp.  Surprisingly, the Contax G actually shows a very slight edge over the other two at f/5.6 and f/8, though it’s bordering on negligible.  Still a very impressive performance from all three lenses.

Next, let’s take a look at the extreme corners.  Again, click to open the crops and zoom in to view at full size:

Here things start to differentiate themselves.  The Fuji 56mm shows some corner softness at f/1.2, and still some at f/1.8, though by f/2.8, it’s sharpened up considerably and by f/4 we’ve reached outstanding cross frame sharpness.  The Batis 85mm f/1.8, on the other hand, shows very good corner resolution right from f/1.8, improving to outstanding by f/4.  The Contax G is also extremely good right from its f/2.8 maximum aperture, but it trails the Batis by a hair at f/2.8 and f/4.  By f/5.6 and f/8 (f/4 and f/5.6 on the Fuji), all three lenses are showing excellent cross frame sharpness that is hard to differentiate between them.

Bokeh is very subjective, but I thought I’d show some crops here to see how specular highlights in high contrast areas are handled.  The crop is taken from the top center of the image frame, and the slightly narrower FOV of the 90mm lens does lose a bit, which is why its crop is slightly lower than the other two lenses.  The Fuji has a 7 bladed aperture, the Contax an 8 bladed aperture and the Batis a 9 bladed aperture.

So this one is a lot harder to judge.  To my eye, the Fuji 56mm shows the smoothest bokeh in this situation at f/1.2 and f/1.8 (f/1.8 and f/2.8 on the Zeiss lenses). At f/1.8/2.8, the Fuji and Batis are fairly close, while the Contax shows some unsightly yellow and purple tinge to the bokeh.  Stopped down further, all three lenses put in a similar performance.  The Batis has the roundest highlights due to its 9 bladed aperture, but all are rather close.  You be the judge.

All three are obviously stellar optics, with extremely comparable center resolution.  When it comes to corner resolution, the Batis 85mm comes out on top, with excellent sharpness in the corners right from f/1.8, while the Fuji lags a bit.  Stopped down to medium apertures, however, all three lenses are sharp corner to corner.  Bokeh is also very close, with the Fuji showing a bit softer look wide open while the Batis has nice round highlights even at f/8.  None of the lenses has perfect bokeh, however.  It is apparent to me, though, that one really shouldn’t worry about switching to a system for either the Batis 85mm or the Fuji 56mm…both are truly excellent lenses.

The second test is a really quick down and dirty test that I took with the only model available at the time.  Given that this model is two years old, the chances of me getting two identical shots with two different cameras was exactly 0%.  That said, here’s a quick ‘real world’ type scenario, taken at f/1.2 on the Fuji 56mm and f/1.8 on the Batis 85mm.  Use this simply as a means to evaluate rendering. in this scenario.

What are my thoughts here?  Well, I think the Fuji’s bokeh looks nicer here.  It’s subtle, but it’s smoother and the lower contrast is very pleasing, and the Fuji colors shine.  The Batis shows high contrast and a bit more pop.  I will say that in this shot, the Batis is also sharper on the eyes, but given that I can’t guarantee that both lenses were dead-on focused (given that the model was rather energetic and constantly moving), I won’t bother to share the crops.  You know how sharpness compares from test #1.  So there it is.  For those who are curious how these two excellent portrait lenses compare for such shooting, I hope this satisfied your curiosity.  As for a clear cut winner: there really isn’t one.  The Batis 85mm is definitely the sharper of the two lenses, but with a fast 85mm, that may not be the most important thing, and, with the exception of corner resolution, we’re sort of splitting hairs at this level.  That said, having shot the Batis on the ultra-high resolution A7R II (full review here), I will say that it would not surprise me at all that if Fuji had an ultra high resolution body, the Batis may show a much larger resolution lead than is shown here: it’s still exceptionally sharp wide open even on that camera.