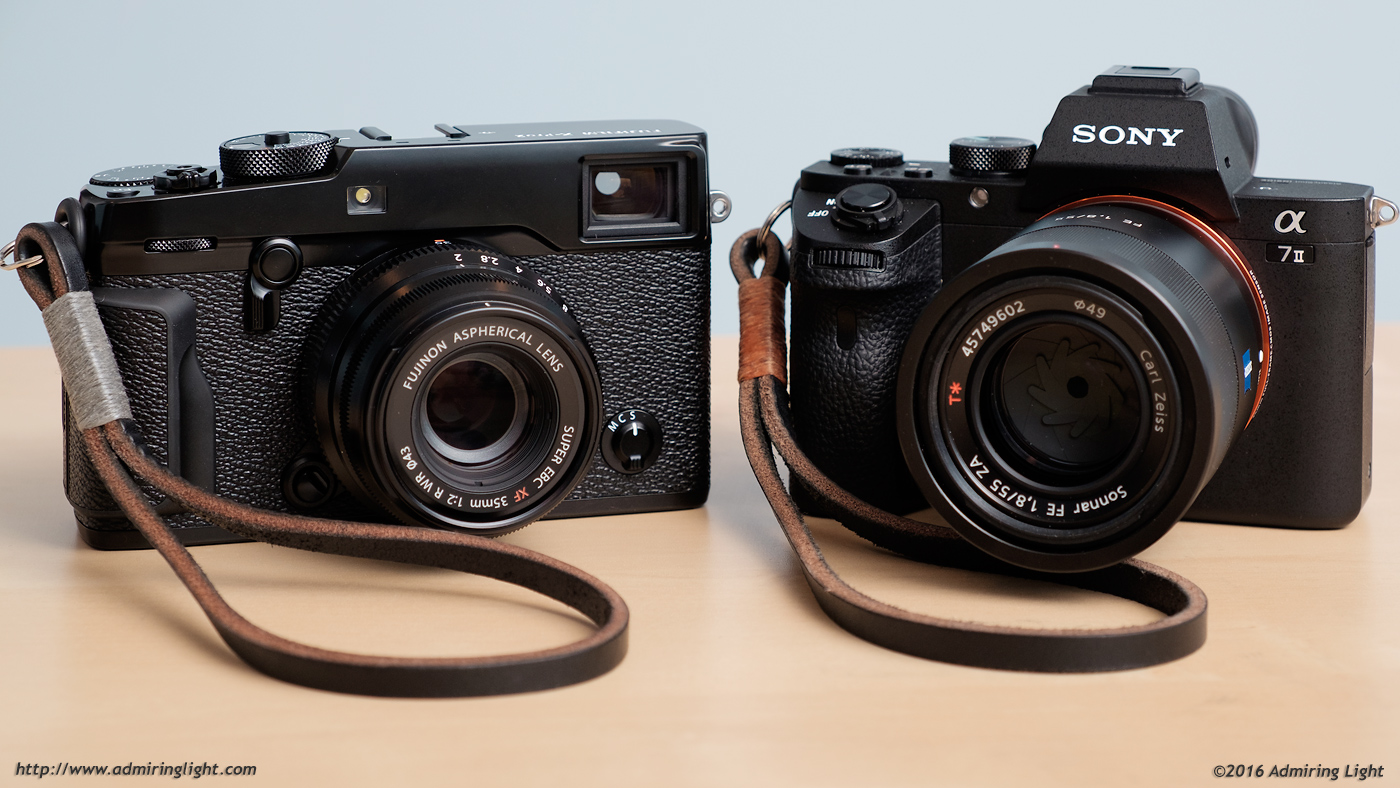 The new Fuji X-Pro 2 is the first camera from Fujifilm since the release of the X-Series to feature an all-new image sensor.  The new APS-C sized sensor is a 24 megapixel CMOS sensor with Fuji’s X-Trans filter array.  The new sensor is also said to improve high ISO shooting when compared to the previous generation of camera, despite the 50% increase in pixels. Now that Fuji has gone to 24 megapixels, I thought I’d compare it to one of my other 24 megapixel cameras: the full-frame A7 II.

There are many ways you could compare cameras, but I specifically wanted to see how the new sensor in the X-Pro 2 stacked up against a relatively modern full-frame camera.  Now, the A7 II isn’t quite as good as the A7R II in noise performance, but it is similar to other cameras from Canon and Nikon that share similar resolution.  To properly compare the cameras, it was important to first establish a fair baseline for the actual sensitivities of the cameras.

Fujifilm is well-known to use a different ISO scale than other manufacturers, and when asked about the difference, you’ll often hear it’s around a stop different, while others will put it at a half a stop. To test where the actual difference is, I mounted the same lens on both cameras (to eliminate transmission differences), in this case, the Canon FD 50mm f/1.4.  Shooting that lens at f/2.8 on both cameras, I evaluated the exposure when both cameras were set to ISO 200, f/2.8, at 1/2 second. I then compared the RAW files in Lightroom, and boosted the Fuji file until the measured values of the white, middle gray and black patches on my color checker matched the Sony file exactly. With these two cameras, the difference is exactly 0.60 stops.

The X-Pro 2 sensor, like many modern sensors, is ISOless. This means that a shot underexposed and pushed in RAW conversion will yield the same noise output as a shot taken at the higher ISO and exposed correctly. To compare apples to apples, I shot both cameras with the exact same exposure settings, starting at 1 second, f/5, ISO 200, and shortening shutter speed by a stop and increasing ISO one stop (1/2s, ISO 400, 1/4s, ISO 800, etc) throughout the ISO range.  The Fuji files were then all brought up 0.60 stops in Lightroom to match the brightness of the Sony files, such that the compared images are exposed exactly the same, with the exact same image amplification.

The Sony utilized the Sony Zeiss FE 55mm f/1.8, while I shot the Fuji 35mm f/2 WR on the X-Pro 2.  Framing was adjusted to match due to the slight difference in field of view between the two lenses.

I took 100% crops from each image, in two locations: an area of fine detail in the center of the frame (the sketch of the Guggenheim Museum), and the right two rows of my color checker, to check solid color noise in mid-tone and shadow areas. Click the image below to open.  Be sure to click to magnify the image so you are viewing it at 100%.

When examining the above crops for noise, if you’re like me, your first reaction is that there isn’t that much of a difference between them.  The two cameras look very similar from a noise standpoint at lower ISOs, and they resolve similar amounts of detail, with maybe a very slight edge to the Sony.  The noise differences don’t become truly visible until around ISO 3200, where the Sony shows slightly finer grain structure and slightly cleaner detail.  Both cameras retain good detail up to ISO 12,800, while the Fuji loses a small amount of detail at ISO 25,600.  At ISO 6400 and below, the two cameras are extremely close in noise performance…I’d estimate 1/3 stop difference or less.  At ISO 12,800 and 25,600, the difference is a bit more pronounced, but still less than a half a stop difference, which I think shows a great performance from the X-Pro 2.

However, the crops above don’t tell the whole story at the highest ISOs.  While the color fidelity of both cameras is fairly impressive as ISOs climb, it is particularly neutral with the X-Pro 2, which shows no noticeable color cast as ISOs increase.  But most telling is in looking at the whole images, where the dark background of the images show distinct differences.  The X-Pro 2 maintains good color control here and shows no visible banding.

Now take a look at the Sony image at ISO 25,600, below.  While the well illuminated areas show slightly less noise, the dark background shows some pattern noise and maybe even some slight banding, with a slight purple color cast.  There’s even what appears to be some sensor heat artifacts in one spot along the top edge, to the left of the book, that is showing some purplish blobs. Comparing both full size images, I prefer the overall look from the X-Pro 2 at this ISO.

Looking at the performance as a whole, the A7 II has a very slight edge at medium to high ISOs, but it’s a small lead.  This is quite impressive for an APS-C sensor.  Well done, Fuji!

Compared to the Fuji X-T1

However, the older Fuji sensor already was fairly close to this level anyway, through most of the range.  Fuji claims that the X-Pro 2 has notably improved noise performance when compared to earlier cameras, and some reviewers have said the same.  How big is the difference?

Hmmm…There’s a difference, but it sure isn’t large, especially at ISO 3200 and 6400, where it’s barely perceptible.  The extra resolution of the X-Pro 2 shows a bit finer detail at these ISOs, even when downsampled, but noise performance is very similar.  However, at ISO 12,800 and 25,600, the X-Pro 2 shows it’s stuff.  There’s a noticeable detail advantage (again, even downsampled), and the noise is finer grained on the X-Pro 2.  Still, it’s maybe a half stop difference at ISO 25,600 and maybe 1/3 stop difference at ISO 12,800.  It’s great to see that the X-Pro 2’s added resolution doesn’t make for noisier images, but it’s also not a massive improvement either.

So there you have it.  It’s just one test, but I think it shows that the X-Pro 2 packs a very good sensor.  I’ll have my full review of the Fuji X-Pro 2 in the coming weeks.