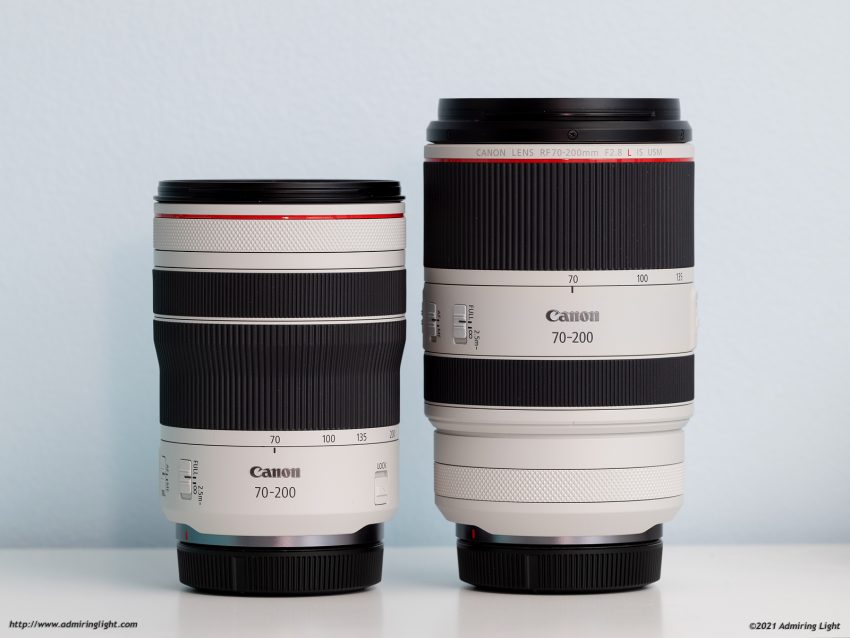 Canon has gone with a new exterior design for their 70-200mm zooms for mirrorless, eschewing the standard internal zooming design for these lenses. The result is an extending barrel design that dramatically cuts down on size and weight in comparison to their DSLR counterparts.

Both lenses are built to high standards, but upon close examination, the f/2.8 version is the more robustly constructed lens. The extending barrel of the f/4 version has just a small bit of play, while the f/2.8’s barrel is exceptionally rigid. The smoothness of both zooms is outstanding, and both feature manual focus rings, control rings, and the full complement of focus and stabilization switches, as well as a zoom lock.

Both lenses feature optical image stabilization, and both are sealed against dust and moisture. The larger f/2.8 version comes with a tripod collar for better balance while tripod mounted. Both have fast and accurate autofocus. While the focal lengths are the same, I did notice that the f/4 version exhibits slightly less focus breathing at close focusing distances. In these tests, at 200mm, the f/4 version had a slightly tighter field of view, probably around 10-15mm longer than the f/2.8 version. Of course, near infinity, the field of view is near identical.

In all, these are two great compact pro-level zoom lenses. But how do they compare optically?

As I mentioned, this is just a quick test at one focus distance, and is not meant to be the end-all be-all comparison between these two lenses. For this test, I set my 45 megapixel EOS R5 on a tripod, aimed at the test scene. The point of focus was approximately 1.25m away. I placed a crystal decanter in the background to provide some specular highlights so I could take a look at the bokeh of the lenses. I tested each lens at 70mm, 135mm, and 200mm, at full aperture stops from wide open through f/8.

I took 400×400 pixel crops from the near center of each test image, as well as from the near corner of each image. Note that because of changes in focal length, the corner constitutes a different spot at each focal length. Also, at 135mm and 200mm, the corner crop is slightly different for each lens due to slightly different amounts of focus breathing, such that the f/4 version was slightly tighter into the scene than the f/2.8 version.

The crops are presented below for each focal length tested, and are 100% pixel crops. Click on the image to open it larger. Be sure to magnify to view at 100%.

Looking at the above, both zooms show impressive resolution in the central area right from their maximum apertures. The f/2.8 version is slightly sharper when both are at f/4, but it’s an extremely small difference. The corners are a different story. The f/2.8 lens shows a bit of softness at f/2.8, which improves upon stopping down, until it is sharp at f/8. The f/4 version, however, is fairly soft at all aperture settings, with mild improvement at f/8.

At 135mm, once again, both lenses are excellent in the center, straight from their maximum apertures. Once again, the corners are notably better on the f/2.8 lens, with it being very sharp to the corners right from f/2.8. Stopping down eliminates vignetting and shows a moderate increase in sharpness. The f/4 lens is a bit softer, but resolution is ok. Unfortunately, it doesn’t improve that much upon stopping down.

Here, the f/2.8 lens shows good resolution at f/2.8 that improves to excellent resolution at f/4. The f/4 lens is quite sharp at f/4, and a bit sharper than the faster zoom is at f/2.8, but not quite as sharp as it is when closed down to equal the f/4 aperture. Beyond f/4, both lenses are incredibly sharp in the center, with very little difference between them.

In the corner, however, we have good resolution from the f/2.8 lens at f/2.8 and f/4, improving to excellent resolution at f/5.6 and f/8. The f/4 lens, however, has something a bit strange going on here. First, it’s soft in the corner at f/4, but it actually gets worse as you stop down.

Needless to say, this is a bit unusual. When I noticed this after taking the test shots, I retook the 200mm shots for the f/4 lens multiple times, each time with the same result. All of the above crops were taken from the same image, with focus at the center. However, it appears the f/4 lens shows some field curvature that worsens when stopping down. To confirm this, I took a shot from the same position, but focused in the corner, and the difference is stark:

While the corner isn’t blisteringly sharp when focused there, it is a big improvement on the lens when focused on the center, indicating that at long focal lengths and small apertures, there is field curvature that will affect corner sharpness on flat subjects. The f/2.8 lens, however, has a flat field of focus.

After running the above tests, I wanted to see how long that field curvature posed a problem, so I did an additional test the following morning, at a focus distance of 3m. I simply present the f/4 and f/8 crops at 200mm below:

Here things look much better for the f/4 zoom. The field curvature still knocks a touch of sharpness from the lens at f/8, but it isn’t bad at all, and remember, this is the extreme corner on a 45 megapixel sensor. Overall, the two lenses are rather close at this further focus distance, with a very slight edge to the f/2.8 zoom.

In all, both lenses perform quite well, but through a combination of optics and some field curvature, the f/2.8 version shows better corner sharpness throughout the range, at least on flat field subjects at closer focusing distances.

Now let’s take a quick look at bokeh. I didn’t want to get too into the weeds here, so I took crops from the same location on the decanter for both lenses at a variety of apertures at 200mm.

Here there really isn’t a whole lot to pick between. Both lenses show very pleasing bokeh, with no bright ring outlining, smooth transitions between highlights and no obvious fringing. The slight blue hint around one of the highlights is not purple fringing of the lens, but rather color from the light through the decanter.) The f/2.8 lens can obviously create more blur with the one stop faster aperture, and as these spots are near the edge of the frame, maintains rounder highlights when both are at f/4. However this one is pretty much a wash.

So there you have it. One test at one focus distance. And the winner? I have to give it to the f/2.8 for the more even performance with regards to resolution. Does that mean the f/2.8 lens is better in every situation? Nope. Check out my full reviews of these lenses for more information.