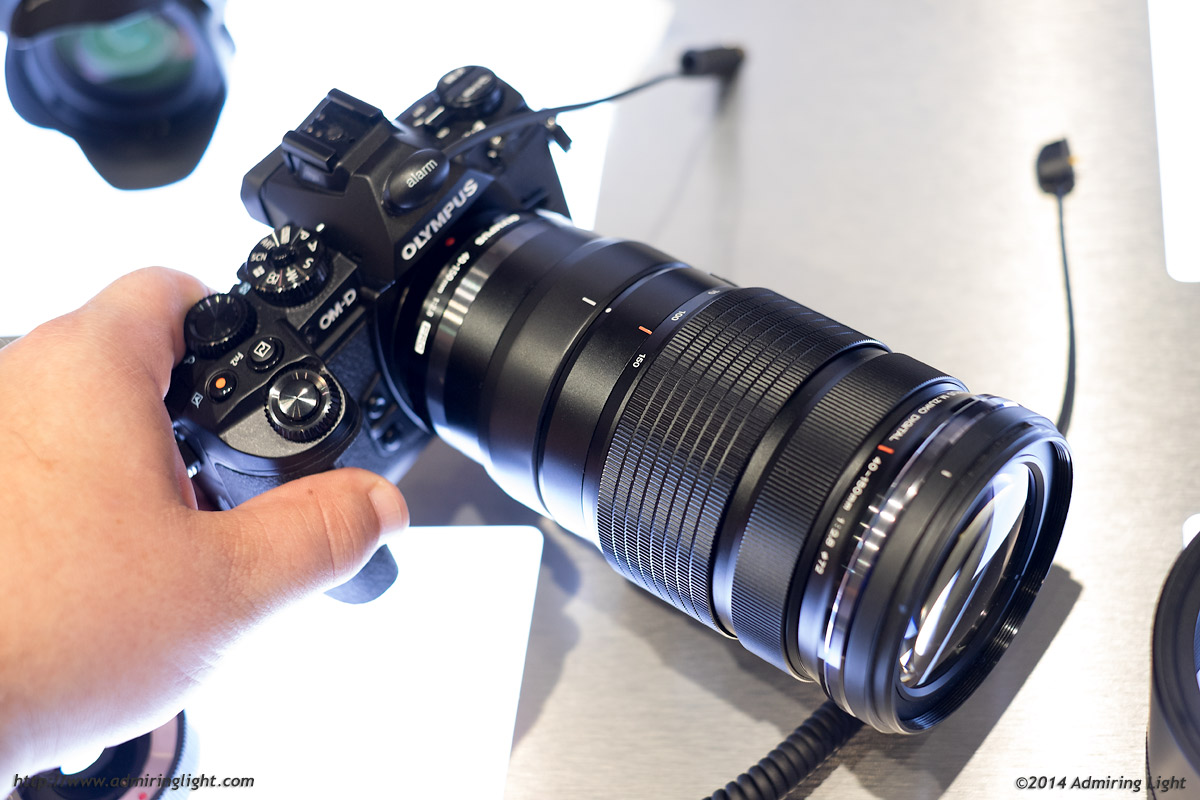 It’s day one of Photokina 2014, and the Koelnmesse is buzzing with thousands of photographers and press. I stopped by the Olympus booth to check out their new , long-awaited 40-150mm f/2.8 Pro lens.

The lens is, given the focal range and aperture, rather large for a Micro 4/3 lens, but it’s fairly compact for a fast zoom covering a longer than normal range. The lens has a field of view equivalent to an 80-300mm lens on a full frame camera, with even more reach possible by adding the 1.4x teleconverter, which will be available with the 40-150mm in a kit. The lens features the same build quality as Olympus’ already established 12-40mm f/2.8 lens, though this lens is completely internally zooming, so there’s no externally moving parts. Along the side of the lens is Olympus L-Fn button, which can be programmed when used with any of the more recent Olympus camera bodies. The broad zoom ring sits quite a bit forward on the lens, and operates fairly smoothly, though it’s not quite as nice a zoom feel as something like the Panasonic 35-100mm f/2.8. The tripod collar is a fairly standard design, and turns easily, though it’s a bit grittier than some of the best collars, though I doubt it will make much difference in real world shooting. The lens hood for the 40-150mm is of the same design as the one for their 60mm Macro lens. It attaches bayonet style, but slides up and into place, negating the need to reverse it. On the down side, the hood is huge, and makes the lens look far larger than it is with the hood off.

The 1.4x teleconverter that can be mated to the 40-150mm f/2.8 is very small, adding less than an inch to the length of the 40-150, and creating a very high quality 56-210mm f/4 zoom. Autofocus with this lens is extremely fast. When I tested it on the E-M1, the focus snapped right on nearly instantly. This is true even with the 1.4x on, and I was in less than stellar lighting conditions. Very impressive in this department. Because this is a pre-production lens, I was unable to get full size samples with the 40-150, but when shooting and looking at the LCD and through the EVF, it looks to be very sharp wide open, even with the 1.4x TC. Of course, I’ll have to wait until I get my hands on one for review before I can speak definitively about the final image quality this lens can produce. However, the overall package appears very impressive at first blush.

These two lenses were unfortunately only on display behind glass, rather than available for perusal. The Olympus employee noted that they were only mockups, rather than working lenses. The finish on these two lenses appears identical to the other two Olympus Pro lenses, and the 300mm f/4 looks to be roughly the same size as the 40-150mm, which isn’t too bad at all. The 7-14mm is rather large in comparison to the slower Panasonic 7-14mm, but otherwise looks to be well-built and functional. The images below will get you an idea of their aesthetics, though Olympus put them behind perhaps the most reflective glass imaginable.

I also took a quick look at the new Silver E-M1, and I have to say, I’m not a fan. The dials are polished metal, and are very bright, while the rest of the paint is a bit duller. The silver just doesn’t mesh well with the slightly more modern looks of the E-M1, in my opinion, but you be the judge. I’ll likely have more from the Olympus booth, including an in-depth report on the E-PL7, later in the week.