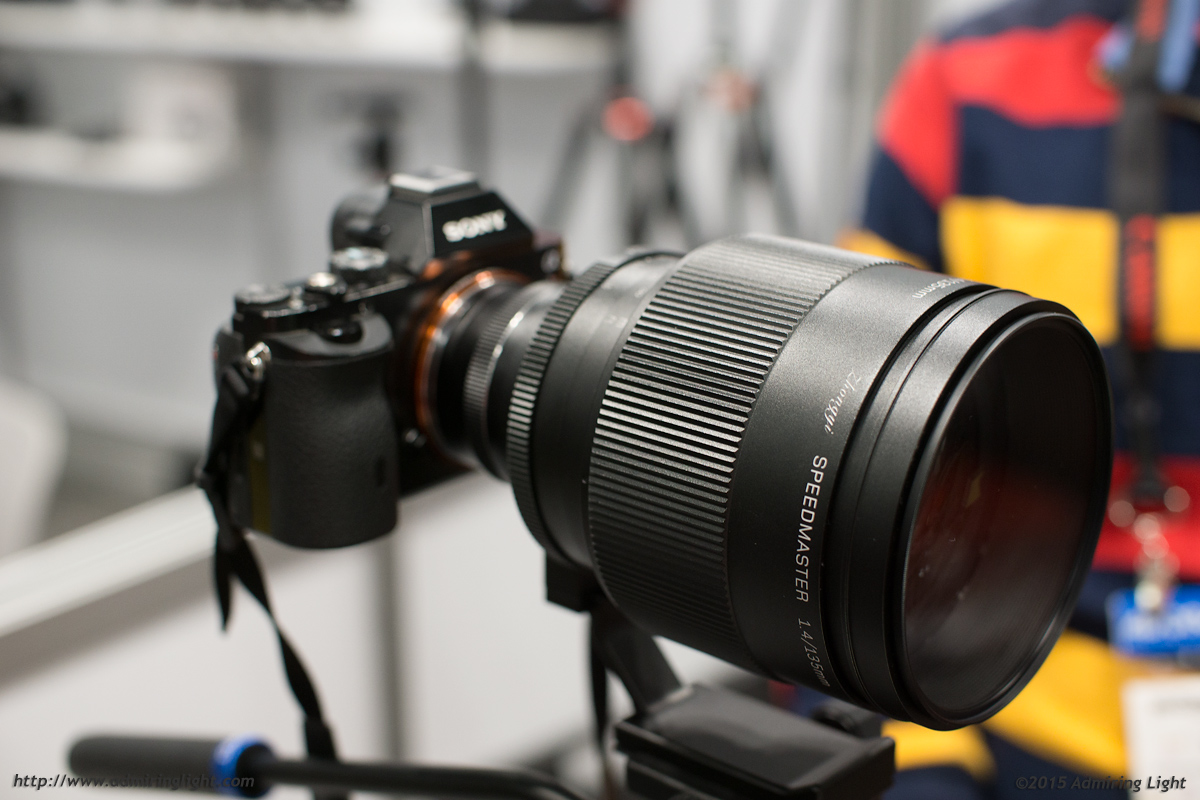 I happend upon the Mitakon booth on my way out of PhotoPlus for the day, and saw the newly announced limited edition 135mm f/1.4, and just had to stop.  Along the way, I tried out two other new ultra-fast prime lenses for E-mount and Micro 4/3.

This lens, the fastest 135mm available, was just announced a few days ago.  It’s ridiculously huge, as one might expect from an extreme aperture telephoto lens.  Mitakon had the lens mounted on a tripod as well as another copy for closer inspection.  The lens is a big hunk of metal and glass and has smoothly turning aperture and focus rings.

Ergonomically, it’s a challenge, as the focus ring is part of the enormous outer barrel.  My hands are not accustomed to focusing such a large ring, and it made it quite difficult to turn easily simply because of the size. It also has a relatively long minimum focus distance of over 1.5m.  Still, if you want shallow depth of field, this lens can deliver.  I didn’t have my A7 with me, but I did get a chance to take a quick shot with my a6000.

Mitakon also has some very interesting ultra-fast mirrorless lenses on display here at the show.  They handed me their new 35mm f/0.95 for Sony APS-C E-mount cameras (also available in Fuji X and Micro 4/3) and I took the one image above of the 135mm with that lens.  It’s quite compact, lightweight and has good tactile feel.

I unfortunately had my shutter speeds a bit too slow, as I had been using my stabilized 35mm f/1.8 OSS, so I don’t have full size image samples due to some hand shake, but the qualities I see look quite nice. This might be a very nice option to get full-frame depth of field for a small amount of money.

The lens is roughly the size of the Olympus 25mm f/1.8, but is nearly two full stops faster.  The focus and aperture rings feel great, and at $399, is an unbelievable bargain given the aperture.  I didn’t shoot much with it, but they had a GH4 they let me use, and contrast is excellent while sharpness looks decent too (I may have slightly missed focus).  See a full-size sample below.

Mitakon is certainly pushing the boundaries for speed and affordability in its lenses.  Let’s hope they keep it up!