Today I’m going to take an in-depth look at a camera accessory.  Most of the time, these sorts of things are evaluated with a quick blurb and then consumers are left to sift through forums or Amazon reviews to get an idea of the worth of a product.  I think for the accessories that really affect the function of a camera, it’s worth taking a closer look.

I recently received my Olympus HLD-6.  Olympus dubs it a “Power Battery Holder,” which I think is the worst possible description for the product.  In reality, it’s a somewhat innovative take on the classic portrait grip accessory that is available for most consumer and prosumer level DSLRs.  It adds a vertical grip to the base of the camera, with shutter button and duplicated controls to allow for shooting in the vertical (portrait) orientation while keeping the same grip as when shooting in landscape orientation.  It also adds space for an additional battery so that you can go longer without running out of juice or swapping batteries.

Olympus has taken a unique approach by making their accessory grip a two piece set.  I love that Olympus has done this, as it allows you to customize the grip to your specific handling needs.  By its nature, the OM-D E-M5 is a slim profile camera, with a contoured grip that is reminiscent of those found on 80s-era SLRs (though with a subtle curve to give the fingers something to latch on to).  It works, but many people want a bit more to hold on to.

For this application, a horizontal grip section can be attached to the camera, which provides a deep hand hold and a duplicate shutter button and front wheel.  This part of the grip makes the camera a little bit taller, but gives a solid grip that my entire hand can fit on.  It makes the camera handle much like the Panasonic GH2, though with a longer grip to allow the pinky to be used as well.  The second part of the grip attaches to the first and provides the portrait grip and control wheels, plus two additional programmable buttons and the extra battery compartment.

The first piece, which I call the horizontal grip, is made of metal, and is flocked with a soft suede-like fabric on the part between the camera and the grip.  To attach the horizontal grip, you need to remove the small foam cover on the bottom of the camera to reveal the power and communications contacts.  There is a space on the inside of the grip to seat this cover so that you don’t lose it.  You then just line up the tripod socket with the screw on the grip and turn the locking wheel to secure the grip to the camera. 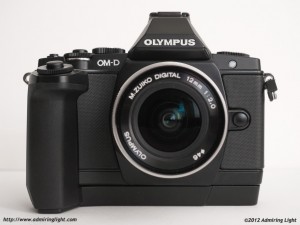 The power and communications contacts will seat into the camera, and a small pin fits into a hole on the bottom of the camera to keep everything aligned and rigid.  Despite the single screw attachment, the grip is very solid when affixed to the camera.  There is no flex between the grip and the body, and it truly makes it feel like a native part of the camera.  The finish of the surfaces exactly match that of the black camera body and so it meshes perfectly with the design of the camera.  From the front, the grip looks like it’s a permanent part of the body.   The shutter button and wheel are well constructed and feel extremely similar to the shutter and dial on the camera body.

The second piece, the vertical grip, is plastic, but well constructed.  To attach the vertical grip, you remove the foam cover from the bottom of the horizontal grip (and store it in a recess in the vertical grip) and screw it into the bottom of the horizontal grip in the same manner you attached the first piece to the camera.  One would think that a two-piece construction like this would feel less than secure, but Olympus did a great job with the design of these pieces, and the whole assembly is rock solid, with no flex at all between any piece of the grip and camera.

The vertical grip includes a shutter button, which has a lower profile than the horizontal shutter, in order to lessen the chance of accidental pressing while holding the camera in landscape orientation.  It also includes a second rear dial to use with your thumb, and two additional programmable buttons (BFn-1 and BFn-2).  I have set these to mimick my settings for Fn1 and Fn2 to allow for the same operation in either orientation, but you don’t have to do this.  Both of these buttons can be programmed to do any of the functions the Fn-2 button can be assigned to on the main camera body.  There is a nice rubber thumb rest and a locking switch which will turn off the vertical grip controls if you find yourself accidentally activating any of them while using the camera in the horizontal orientation.

On the left side (or bottom, depending on how you look at it) of the vertical grip lies the door for the second battery, as well as a 9V plug for the optional AC adapter, which you can then use to power your camera from the wall.

Both sections of the grip are weathersealed, and the whole assembly retains the weathersealing of the camera.  It’s a very well constructed and well thought out accessory.  Olympus has taken great care with the HLD-6, down to small details like the gentle slope of the outside of the grip as it nears the bottom of the horizontal grip and into the vertical grip.  This small cutout conforms perfectly to the heel of your hand, making it much more comfortable to hold than if they had kept the grip straight throughout.  This attention to detail is seen throughout the product.

I have taken to using the horizontal grip by itself as my preferred use for the HLD-6.  It adds a small amount of height, and a small, but noticeable amount of weight, but also makes the camera handle really, really well.  The grip is more sure, the camera balances better with larger lenses and shooting is easier and more comfortable.  The shutter and dial feel just as good as the main ones on the camera.

On the down side, use of the horizontal grip by itself blocks the battery door, and so you must remove the grip any time you need to charge the battery.  This is a minor inconvenience, but it does preclude changing batteries rapidly.  If you are in a situation where battery power is critical…I think it makes more sense to shoot with the whole grip assembly installed and add a second battery to the vertical grip.

The vertical grip adds a minute amount of weight to the rest of the camera when used without an extra battery.  Still, the controls are comfortable, and the rear dial is actually better positioned on the vertical grip than it is on the main camera.  The two function buttons are easily accessed.  In a very well-thought out move by Olympus, the vertical grip control locking switch is in the perfect position to be switched by your thumb when holding the camera by the vertical grip.  This really makes the use of the lock switch viable, as you can shoot normally with those controls disabled, but simply flick your thumb when you switch to vertical to make them active again.

With both grips attached, the camera is, of course, noticeably larger than without the grips.  It looks and feels a lot more like a small DLSR than without.  That said, the package is still very lightweight, and very thin.  You’re not going to really fatigue faster when using this grip.  You can see how the OM-D E-M5 with grips compares to a full frame DSLR with integrated vertical grips below.

At $299, the HLD-6 isn’t the cheapest accessory on the market.  You will certainly need to weigh its advantages against the larger size and cost of the grip.  However, if you want a more comfortable and secure grip, longer battery life and the ability to shoot verticals in a more natural position, the HLD-6 is a very well made product, with a wonderful two piece construction that allows you to choose how you want the camera to handle.  The well thought out control placement and solid build make it worth the price in my opinion.  While it’s a shame the horizontal grip blocks the battery door, it’s a tradeoff I’m glad to make for the two piece construction.  The HLD-6 is the first OEM accessory grip for a Micro 4/3 camera, and Olympus did a wonderful job with the design and execution.  Well done!