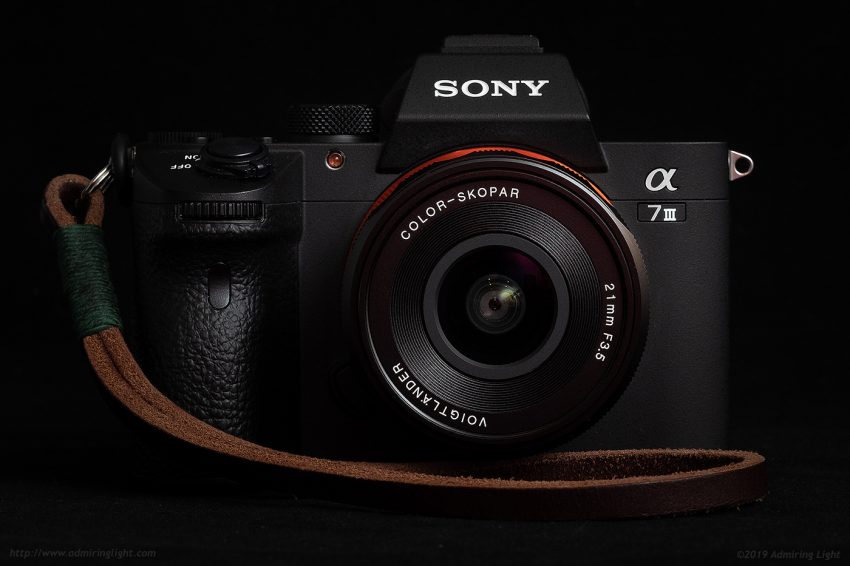 With price and size firmly in its favor, the big question is can the Voigtländer hold up optically when compared to the other major manual focus 21mm lens for Sony E-Mount: the Loxia 21mm.  And the answer is that it holds up surprisingly well.  As you’ll see, I would still give an edge to the Loxia for overall image quality, but the differences aren’t huge.  You’re getting about 90% of the performance of the Loxia for half the price and size.

The Voigtländer 21mm f/3.5 is a very sharp lens.  Starting at f/3.5, the 21mm Color-Skopar is very sharp in the central 2/3 of the image, with the edges and corners falling off a bit.  When focused at medium distances, the field of focus is rather flat, and the lens produces images with good resolution all the way to the edges of the image frame.  At infinity, I found a good bit of field curvature, such that focusing to the hard stop is needed, and at this focus distance, the edges aren’t super sharp wide open.

However, stopping down a few stops increases center sharpness to excellent levels and the edges and corners to very good levels, even at infinity.  It’s not quite as sharp as the Loxia 21mm, but, at least on my 24MP A7 III, it’s honestly pretty close. It’s very impressive image sharpness for such a tiny lens.

When focused near the minimum focus distance of 0.2m, the lens maintains good sharpness centrally, but falls off fairly rapidly towards the edges. In these situations, you’ll want to stop down a stop or two if edge sharpness is important.

The Voigtländer 21mm f/3.5 draws similarly to other recent Voigtländer lenses, producing images with very pleasing color and contrast with a lovely tonality. I love the color response from the Voigtländer lenses, and that same great color is present here as well. Comparing to the Loxia 21mm, the Voigtländer isn’t as biting when it comes to contrast, and local contrast is a bit more muted in comparison.  Which is more pleasing will depend on the photographer’s preference and the subject matter.

The 21mm f/3.5 has a bit of lateral chromatic aberration, but it’s easily corrected in post-processing.  Longitudinal CA can be seen upon close inspection if shooting very close up at wide apertures, but that’s a niche case for a lens such as this.

With a modest f/3.5 maximum aperture and a super-wide focal length, the 21mm f/3.5 isn’t going to knock out the background, except at very close focus.  However, the Color-Skopar does have a very short minimum focus distance of just 0.20m, allowing for some dramatic wide-angle closeups that can produce ample background blur.

Bokeh is somewhat unremarkable. There is some unevenness with specular highlights, but nothing too objectionable, and the overall rendering is relatively smooth, but no one is going to mistake this lens as a bokeh machine.

The Voigtländer 21mm f/3.5 has a bit of barrel distortion, as one might expect for a small wide-angle lens, but it honestly is far less than I expected. A Lightroom adjustment of +2 to +5 will bring any residual distortion under control, but I don’t feel the need to correct it in the majority of situations.

One definite weakness, however, is vignetting, where the Color-Skopar shows fairly significant falloff in the corners, even when stopped down.  There is currently no Lightroom profile for this lens, so any correction must be done manually. The profile for the Leica M-Mount 21mm f/4 color-skopar corrects the vignetting in the correct areas of the image frame, but is far too strong, so applying that vignetting profile at around 33% results in fairly good correction of any residual vignetting.

The 21mm f/3.5 is a bit finicky when it comes to flare.  In most cases, even with the sun in the frame, flare performance is quite excellent.  Veiling flare is extremely well controlled, and for the most part, ghosting is also under control.  However, if the sun is placed close to the center of the frame, it can induce fairly substantial ghosts very close to the light source, such as can be seen in the shot above.  You will see in the second to last image of the Image Samples on the next page, however, that a very slightly different composition taken at the same time as the shot above shows no significant ghosting.

Like most Voigtländer lenses, the 21mm Color-Skopar produces pronounced sunstars around point light sources.  Due to the 10-bladed aperture, 10-pointed sunstars are prominent in the image when stopped down by any amount.

In all, I was very impressed with the optical quality of the Voigtländer 21mm f/3.5 Color-Skopar.  It’s a lens that can produce extremely pleasing images, with very good sharpness, great color and contrast and fairly minimal aberrations, save for vignetting.  All of this in an extremely compact package that’s also half the price of its closest rival, the Loxia 21mm f/2.8.  If comparing these two manual focus lenses, I’d say that the Loxia is a bit sharper, and has a stronger contrast profile, but these are not enormous differences.  If you want the best of the best, the Loxia will still be the way to go, but I think for the majority of shooters, the quality of the Voigtländer will easily satisfy.