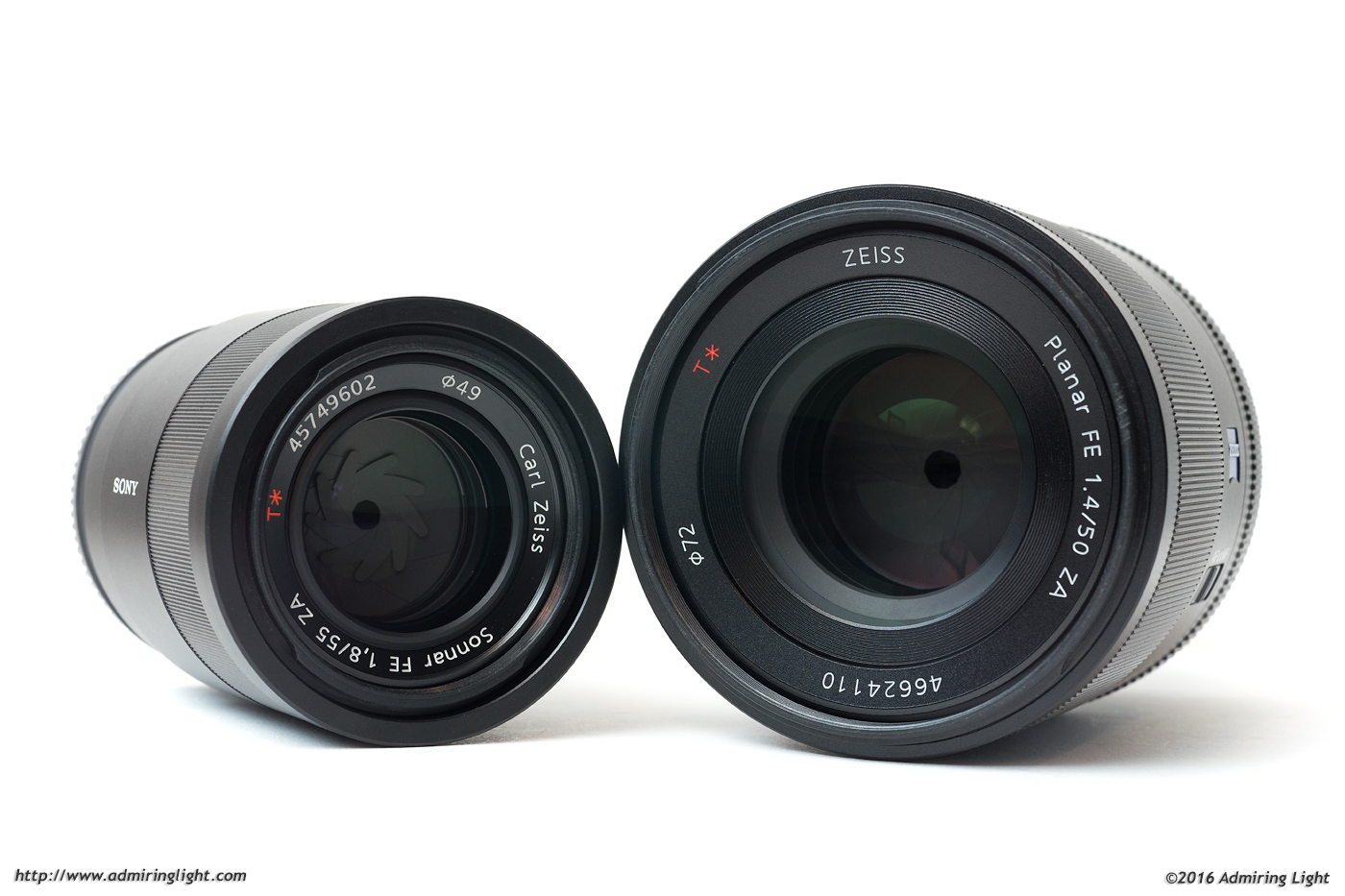 Sony continues to crank out new lenses, and the release this summer of the new Zeiss branded FE 50mm f/1.4 ZA Planar T* came as a bit of a shock, considering there is already a Zeiss branded normal prime that is widely considered to be one of the best autofocus normal lenses ever made, but Sony and Zeiss think they’ve made the ultimate normal prime with this new lens.  The existing FE 55mm f/1.8 is a lens I’ve owned for a while now, and it has never let me down.  But can this new 50mm best its slower (but more compact) brother? Let’s find out.

The two lenses share the same Zeiss badge, and have a similar focal length, but physically they are two very different beasts.  While both lenses feature a very robust all metal construction, the 55mm f/1.8 is a compact lens with a slim barrel and light weight.  The 50mm f/1.4, on the other hand, is a beast of a lens: it’s longer, fatter and nearly three times heavier, and gains the aperture ring also present on the FE 35mm f/1.4 and the 85mm GM.

As you can see from above, that 2/3 stop of extra aperture comes at a hefty size and weight penalty, though there are two major considerations not accounted for in the size, weight and maximum aperture.  The first concerns that faster aperture, and comes in two parts.  One benefit of a faster aperture is the ability to blur the background more, providing more subject separation.  However, the slightly longer focal length actually helps the 55mm f/1.8 a bit here, making the difference in background blur closer to a 1/3 stop advantage for the 50mm f/1.4 rather than a 2/3 stop that would be visible if they were the same focal length.

The second factor doesn’t consider the quality of the optics.  While the FE 55mm f/1.8 is one of the finest normal lenses I’ve had the pleasure to use, but Sony has promoted the 50mm f/1.4 as something truly exceptional. Poor light transmission and large size aside: it may be very well worth it if the 50mm f/1.4 shows us something special optically.  With that in mind, let’s get to the test:

I set up my typical test setup with a flat book to evaluate sharpness and a crystal decanter in the background, plus a crystal glass in the foreground to evaluate foreground and background bokeh. All shots were taken on a sturdy tripod with 2 second self timer to ensure maximum sharpness. I moved slightly closer for the FE 55mm shot to ensure the same framing. As I mentioned earlier, the FE 50mm f/1.4 has much lower light transmission, so while all shots were taken at the same shutter speed and aperture (aside from f/1.4), the FE 50mm f/1.4 shots had to be boosted by 0.45 stops in Lightroom to ensure the same brightness. The full scene is below (this is the FE 50mm f/1.4 at f/1.4):

First, I’m testing sharpness.  Click on the image to open it, and be sure to enlarge to full size to view 100% crops taken from the center and corner from each lens from maximum aperture to f/8.

Well, that optical prowess certainly seems to be showing for the FE 50mm f/1.4.  The 55mm f/1.8 is certainly very good: excellent even for a fast normal, but the 50mm f/1.4 is simply stunning here.

By f/2.8, the 55mm has gained quite a lot in corner sharpness, bringing results there to very good territory and the center is shining as well, but as sharp as the 55mm is, the 50mm is just absolutely razor-sharp throughout.  At smaller apertures, there’s very little difference between them, save for vignetting, where the 55mm puts in a better performance all around, but one thing is certain: the 50mm f/1.4 is simply blisteringly sharp at all apertures, and is by far the sharpest 50mm lens I’ve ever used at f/1.4.

Fast lenses means background blur, and so I evaluated both foreground and background blur from these two great lenses.  Click below to open the image in a new window and enlarge.

This comparison is far, far closer.  Both lenses put in very good performances.  As you can see, at the same aperture, the 55mm shows a bit more blur, but the 50mm f/1.4 can produce more wide open, as you’d expect.  Looking at the quality of the blur, both lenses are quite good, though neither is perfect.  They both produce quite creamy blur, with perhaps a slight edge to the 50mm f/1.4, and both have slight greenish rings around specular highlights that can crop up from time to time, though the 50mm controls this fringing slightly better.

In all, one thing is clear: the 50mm f/1.4 is an optical powerhouse. It’s exceptionally sharp while maintaining very good bokeh. Sony and Zeiss have done something truly special, managing to best their already outstanding 55mm f/1.8. That said, the question of which you should buy is much harder to answer. The 50mm f/1.4 is the choice for uncompromising optical quality, but the much smaller size and lower weight, combined with very similar light transmission at the widest apertures makes the 55mm f/1.8 still an outstanding choice for a lot of shooters.  Whichever you choose, you’ll gain a great lens.