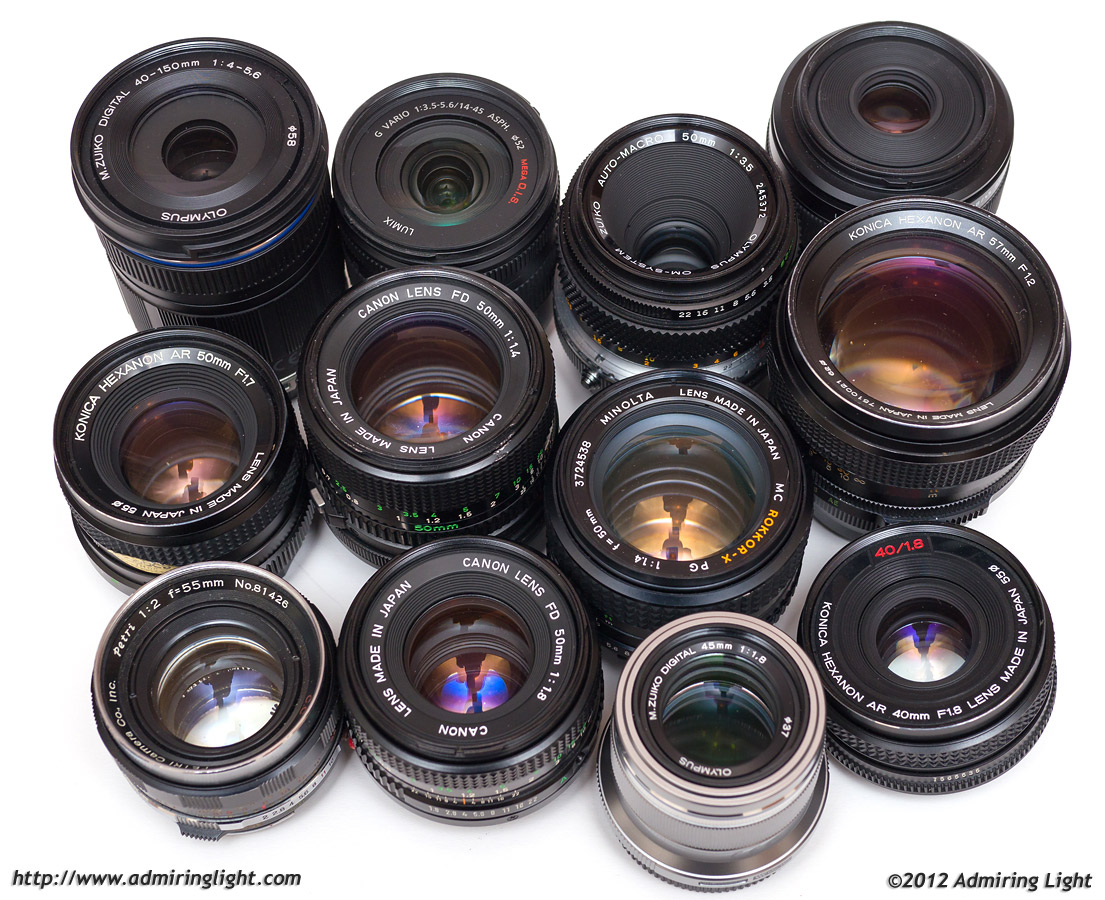 Two days ago, I posted the first test between these twelve lenses.  See Part 1 for that test.  Part 1 also describes the lenses tested.  Part 3 evaluates bokeh.

While sharpness isn’t the most important metric of a lens, it is one that most people notice right away, and can be key in the photographer telling the story. It’s also one of the rather objective metrics one can assess.   In Part 1, I took a look at center sharpness of these lenses.  Today I take a look at edge sharpness.

I received a good bit of feedback on Part 1, with most people requesting that the stopped down portion all be done at the same aperture, rather than two stops down.  So, for edge sharpness, I chose to do that, taking two sets of shots for each lens: one at the widest aperture, one at f/5.6.  I also set this test up to have detail at the corner, with a glass decanter and a vase further away, with a patterned book cover even further away, to provide the bokeh test that I will discuss further in Part 3.

Like the first test, I mounted the camera securely on my tripod and manually focused each lens with 10x live view.  Because I wanted to ensure the best accuracy for the corners, I manually focused all lenses for this test, even the native Micro 4/3 lenses.  I also focused on the area where the crop was taken…in the lower right corner. Since these lenses are a good length for portraits on Micro 4/3, I have tested at a subject distance of approximately 1m.   This also allows for additional background blur, which I will evaluate in Part 3.

The images below are 100% crops directly from RAW, with all white balance set off the book, with the FD 50mm f/1.4 used as the reference image.  The warm cast in the background is due to the tungsten light in the room behind, with natural windowlight (overcast day) providing the foreground lighting.  Due to the depth of the image, I chose to use natural light for this test, rather than flash.  The shutter was tripped using the 2 second timer to ensure no vibration from the shutter press.

Please click on the image to see the full size crops.

Wide Open: Again the Olympus 45mm f/1.8 and 40-150mm are at the top of the heap, along with the Panasonic 14-45mm zoom, which surprised me.  The Leica 45mm f/2.8 macro follows close behind.  Meanwhile, the Olympus OM 50mm f/3.5 macro is the sharpest of the legacy lenses.  This shouldn’t be too surprising given the modest maximum aperture and its macro designation.  The rest of the lenses have a nice softness, though none are truly terrible.  One benefit here is the GH2’s smaller sensor.  While this is a corner on the GH2, it would represent something close to a top edge on a 35mm frame.

At f/5.6: The Olympus 45mm f/1.8 is the cream of the crop stopped down.  As I was assembling the shots, it was one of the last to be put into the matrix.  Up to that point, I was noting how good the Hexanon 50/1.7, 57/1.2 and FD 50/1.8 were…then the 45/1.8 came along and demolished them.  The 45/1.8 is easily the sharpest lens across the frame, while the other native micro 4/3 lenses actually fall a little behind the best of the manual focus lenses.  As mentioned, the Hexanon 57mm f/1.2 and 50mm f/1.7 are very sharp in the corner, while the FD 50mm f/1.8 matches or even slightly exceeds those two.  The rest of the lenses are all sharp, with the exception of the Petri, which is an easy last place finisher.

One note on color: You will notice the Hexanon 57mm f/1.2 and Petri 55mm f/2 have a yellow cast.  This is due to the type of glass used.  While I am not sure of the construction of these lenses, the appearance tells me these lenses likely have Thorium elements in them, and are therefore slightly radioactive.  They both have a light yellow tint to the glass.

Next, in Part 3,  I take a look at the bokeh created by these lenses.