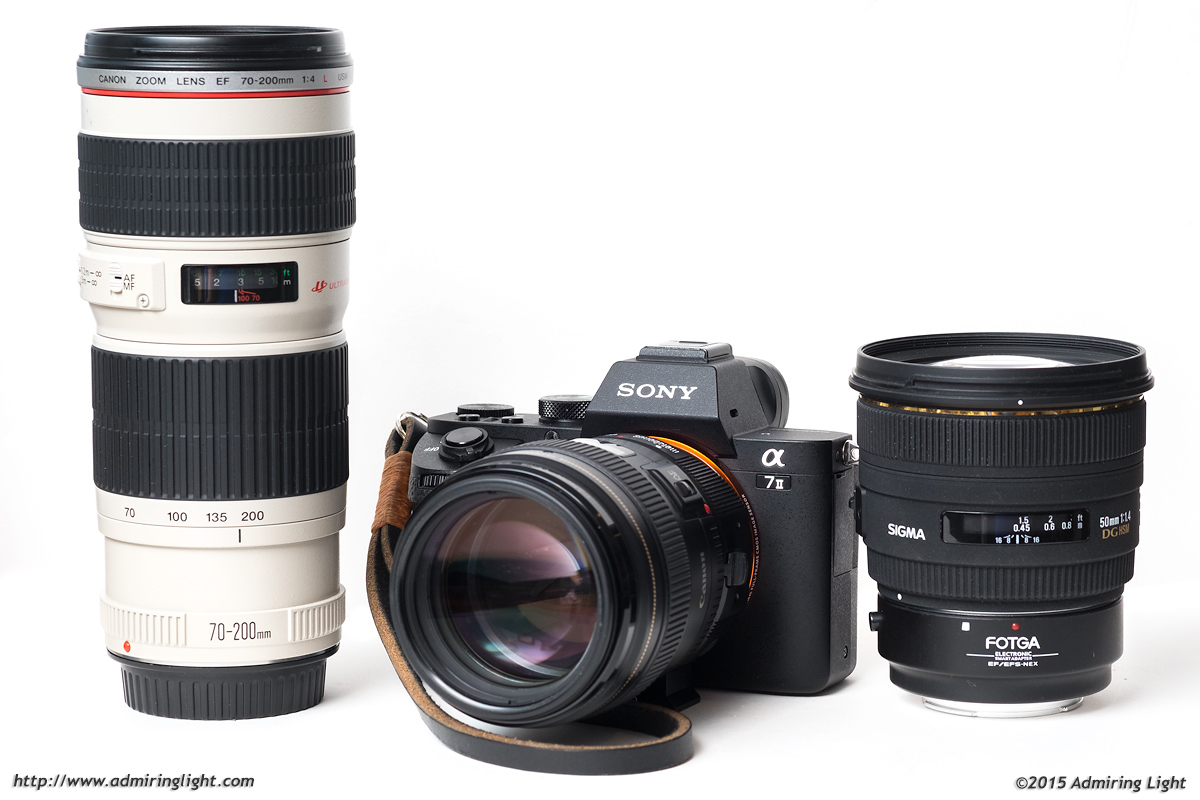 Sony released Firmware 2.0 for the nearly year-old A7 II on November 18, though it was put up a few hours early by several Sony sites in Europe, so those who wanted could do the upgrade a bit early if they so desired.  This firmware was billed primarily for bringing uncompressed RAW capability to the A7 II, which it does, though I honestly think that buries the lead.  The standout feature of the new firmware is adding phase-detect capabilities to the A7 II when used with adapted lenses.  This capability was first seen on the A7R II earlier this year, but few thought that was something the A7 II would gain via firmware update.

I’ve spent the past several days using the new firmware with three Canon EF mount lenses on two different EF to E mount adapters.  The lenses tested were the Canon 70-200mm f/4L, the Canon 100mm f/2 USM and the Sigma EX 50mm f/1.4.  I tested these on the Metabones EF-E adapter IV and the much cheaper Fotga EF-E mount adapter.

In short, the firmware update enables compatible Canon lenses to focus quite quickly and accurately on the A7 II.  Let’s get into specifics:

Note: This post was first published on 11/18/15, and was updated continually until the last update on 11/23/15, after which usage with the Metabones adapter on the newly released v.0.47 firmware was tested.

I tested two different adapters with the A7 II.  I’ve owned a Fotga EF-E adapter for a few months, having purchased it in advance of my A7R II review.  This adapter is available from Amazon for around $65 and is constructed of plastic and metal.  There is no user upgradeable firmware capability.  The one thing that is common with any adapter, including Sony’s own LA-EA3, is that the fast focusing discussed here is limited to the central 30% of the frame or so, which is where the phase detection AF points are located.  When using a lens with these adapters, the camera will only let you select AF points inside this area.  It’s not nearly the broad coverage of the A7R II, but it’s really not too different than the area covered by most full-frame DSLRs.

The Fotga adapter works fairly well with all the tested lenses….when it works.  The main problems I’ve had with the Fotga adapter is the fact that it doesn’t reliably establish proper communication between the lens and the camera.  About 2/3 of the time, when turning the camera on, the adapter doesn’t allow the camera to lock focus at all…it just randomly hunts back and forth, occasionally stopping the lens entirely.  Fiddling with the adapter by power cycling or removing the adapter with the camera on and reattaching will eventually allow the lenses to work properly.  Once this communication is established, it will stay established until you turn the camera off.  At this point, focus is fairly quick and relatively accurate. Another large downside with the Fotga adapter is that the plastic baffle inside is very shiny.  as such, it is extremely prone to internal reflections from oblique light sources that show up as massive flares and ghosts in the image.  Again…you get what you pay for. If you plan on using Canon lenses as a main part of your kit, I’d skip the Fotga…with one exception, which I’ll get into when I discuss the Sigma 50mm.

The Metabones IV adapter on the other hand reliably communicates with the camera and lenses at all times.  The adapter is solid metal and the baffle has a nice matte non-reflective coating.  The newer T version of the same adapter goes even further, with felt flocking covering the entire inside. I had no major issues with the Metabones adapter, but it’s worth noting that not all Canon lenses work well with the adapter (the same is true for the Fotga), so check the compatibility list on Metabones’ website, or do some research if your lens isn’t listed there.  With the three lenses tested here, when using firmware version 0.47, the Metabones was essentially flawless with a few minor caveats.

The Canon 70-200mm f/4L is getting on in years, but it’s an affordable lens with a nice price.  I tried the non-IS version of the lens because the A7 II has in-body stabilization and I’ve read reports of some conflict when using IS lenses with the Metabones on a body with in-body stabilization.

In my testing, predominantly with the Metabones, the 70-200mm f/4L for the most part works beautifully with the new firmware on the A7 II.  Through most focal lengths and focus distances, the camera locks on to the subject quickly and surely in bright to middling light.  While not quite as fast as with a native Canon body, the speed is not too far off.  It’s eminently usable in outdoor and bright indoor scenarios.  Image quality is outstanding and the lens is fast enough to even do some continuous focus fairly accurately, though it’s not a combination I’d consider for serious sports shooting.

The one failing is when the light levels drop.  When the light drops past a certain point, the AF speed drops considerably.  Instead of locking in under a half of a second, it slows to around 2-3 seconds.  I’m not sure if phase detection is failing a bit here, and the camera is reverting to the slow CDAF, but that’s what it seems to be doing.

The only other minor issue with focusing is when zoomed to 200mm.  At this focal length, the camera can focus quickly and accurately, but it occasionally has some trouble when there is a dramatic change in focal distance, especially when going from far to a close-up subject.  In these cases, you may need to quickly manual focus to get the lens closer to the focus point, and then continue with AF, or you can zoom out a bit, refocus, then zoom in and continue focusing.  I didn’t have this issue between 70 and 150mm or so, and even at 200mm it wasn’t a constant thing.

Overall, the accuracy and speed is quite good in most situations where you’d be using an f/4 telephoto zoom.  In dim light, you may be better of using manual focus, but you still gain the benefits of auto aperture and the passing of focal length so that the in-body stabilizer can work.  It’s worth noting that I was getting sharp shots at 200mm and around 1/30s, which equates to nearly 3 stops of stabilization.  Not bad!

After using this lens on the Metabones adapter for the past few days, I’ve been really impressed.  For outdoor use, which is a primary use scenario for an f/4 zoom, focus is very fast and very accurate.  Aside from the somewhat restricted area where PDAF is present on the A7 II, it feels just like using a native lens.  That feeling changes when shooting in dim light, but given the modest maximum aperture, I wouldn’t be using this lens indoors much anyway.

While there are reports of some models of the EF 85mm f/1.8 having some issues with these electronic adapters, its sister lens, the 100mm f/2, didn’t have much trouble in my testing.  Using the Metabones, it felt very near native speed, except in dimmer light, where the same slow behavior noted above could sometimes crop up, though it was much less of a problem with the fast f/2 aperture of this lens.  Still, accuracy was excellent and speed was very good.

With the Fotga, for some reason the maximum displayed aperture was f/2.2, rather than f/2.0. However, with the Metabones, using the newest firmware 0.47, the lens works beautifully.  Under 0.46, the adapter was unable to focus the lens closer than 1.2m, despite the 0.9m minimum focus distance. The 0.47 update fixes this issue, allowing for good speed and accuracy throughout the focus range.

Overall, I feel very similarly with this lens as I do with the 70-200, though it’s even more useful indoors, as PDAF is available in most indoor light and speed is acceptable even in most of these situations.

Using my Fotga adapter, the Sigma 50mm f/1.4 focuses similarly to how it did on my old Canon 1Ds Mark II.  Relatively decent speed, though nothing blazing.  Accuracy is pretty good.  There are no issues with the lens on the Fotga adapter, aside from the issues that plague the adapter in general. The Metabones adapter couldn’t focus at all with the Sigma on firmware version 0.46.  However, the latest 0.47 update that just hit on November 23 fixes this and the Sigma operates as smoothly as it ever did on my 1Ds Mark II.  If anything, it actually focuses faster on my A7 II than it did on my 1Ds II.  I was very pleasantly surprised.

I feel that the Firmware 2.0 truly makes many Canon lenses viable for everyday use on the Sony A7 II.  You’re not going to get fully native speed and compatibility, but provided the lens works well with the adapter, you won’t be too far off in most cases.  It’s a dramatic change for the better in using Canon lenses, and it opens up some options for the focal lengths that are lacking in the Sony FE lineup, or are too expensive to bother with.  It really opens up the use of Canon lenses for everyday use on this camera and the A7R II, and vastly expands the available lenses that can be easily used with full autofocus capabilities.