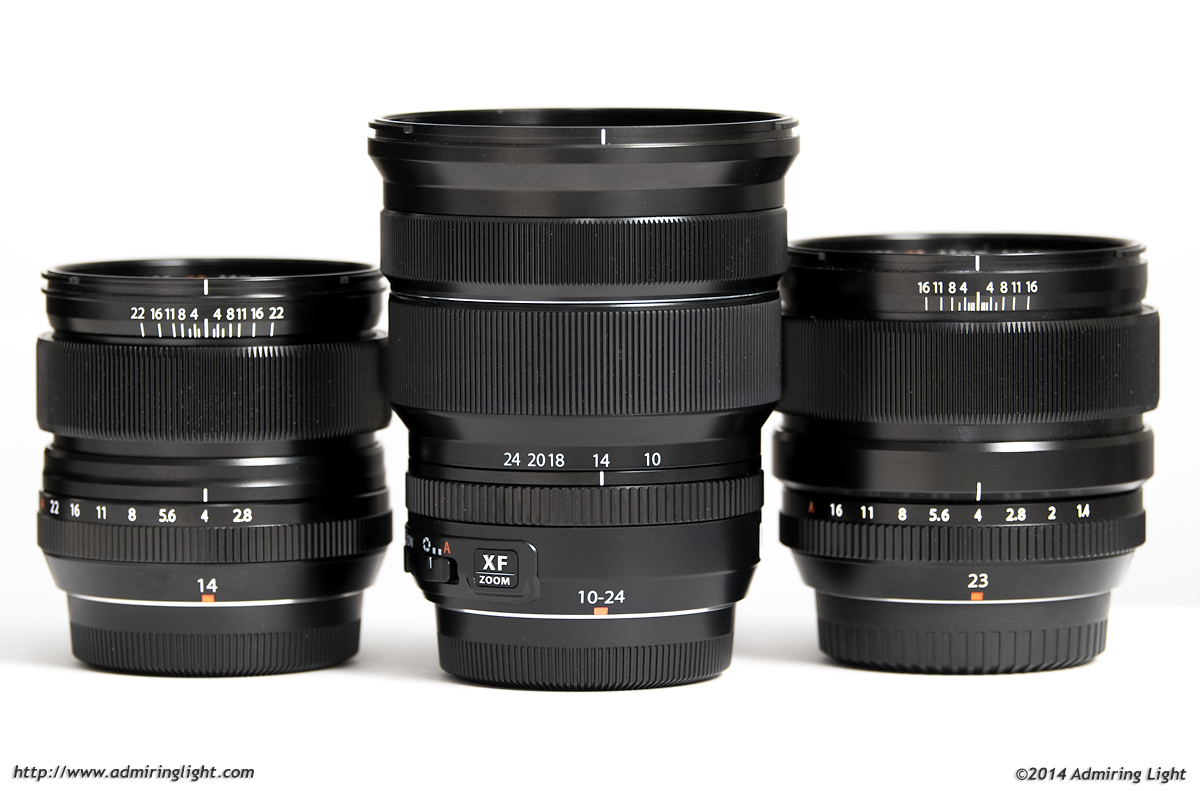 With the release of Fuji’s latest zoom lens, the ultra-wide angle 10-24mm f/4 R OIS, many Fuji shooters are having a difficult time deciding between this lens or a two lens combo with Fuji’s outstanding 14mm f/2.8 and 23mm f/1.4.  Since I own the two primes, and I have the 10-24mm in for review this week, I thought I’d do a quick test to evaluate how this new zoom compares to the established Fuji primes.

Fuji’s new 10-24mm f/4 R OIS is an ultra-wide-angle zoom that features a very useful focal range from ultra-wide angle to moderate wide angle.  The lens produces a field of view equivalent to a 15-36mm zoom on a full frame camera.  The 10-24mm isn’t a small lens by mirrorless standards.  In fact, it’s relatively close to a DSLR ultra-wide zoom.  However, I was pleased to discover that the lens is actually a little more compact in use than it looks in pictures.  It is also a relatively lightweight lens.  So, while it will take up a fair bit of space in the bag, it’s not going to break your back.  Also, if using this lens instead of two or three primes that cover the full range, you’re saving some space.

The 14mm f/2.8 (reviewed here), was released last year and is an ultra-wide prime with a field of view equivalent to that of a 21mm lens on a full frame camera.  As I noted in my review (and in the many shots I’ve taken with the lens since), this is one of the finest wide-angle primes around, offering corner to corner sharpness and essentially zero distortion.

The 23mm f/1.4 (reviewed here), is a recent release from Fuji, and offers a very fast f/1.4 maximum aperture and exceptional optical quality.  Needless to say, I don’t expect the new zoom to match these two primes, but let’s give it a go anyway.

Before we compare head to head, it is worth noting (though it may be obvious), that the primes have certain advantages over the zoom and vice versa, by the nature of their designs these are:

First up, let’s compare the new 10-24mm to the outstanding 14mm f/2.8.  I set my tripod up on the scene below, focusing towards the middle of the frame on the picnic tables in the center.  The camera was tripod mounted and the lenses were changed without removing the camera.  OIS was set to off to avoid any interference from the stabilizer on a tripod.  Since ultra-wide shooting typically involves some near and far subject matter and deep depth of field, this test was set to test that usage for landscape and architectural shooting.

Below are the 100% crops from the center and edge at f/4 and f/8, along with the lower right corner at f/8 (depth of field was insufficient at f/4 to really get this closer corner sharp based on the focus point).  Click on the image to enlarge, then click the green arrow at the bottom of the screen to view at full size.

The 10-24mm puts in a relatively decent performance here, but as you can see from the crops above, the 14mm has an edge both in the center and at the edges of the frame, at all apertures.  While the differences are slight in the center, they are a little more pronounced in the corner, where the 10-24mm can’t quite keep up with the excellent 14mm.  Still, the 10-24mm puts up a good showing here and looks quite capable of delivering good results at this focal length.