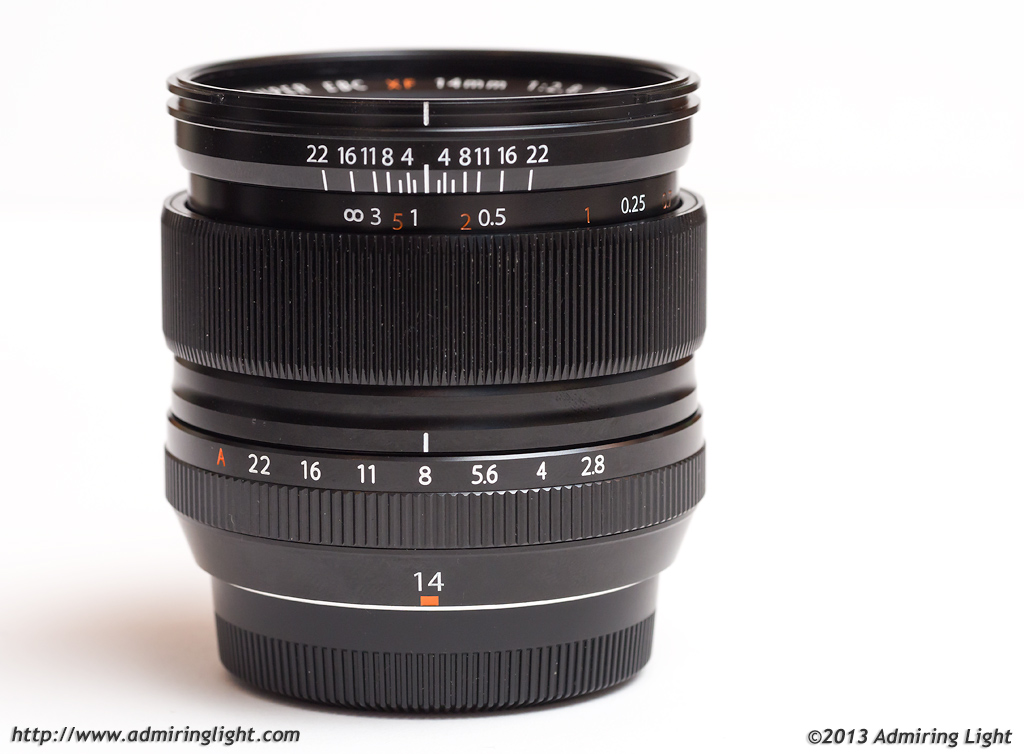 When the X-series of mirrorless cameras from Fujifilm launched last year, it began with three prime lenses: an 18mm f/2, a 35mm f/1.4 and a 60mm f/2.4 Macro.  This gave the system a nice base to start with, and provided three very high quality primes for the serious photographer.  Later last year, Fuji expanded the line by adding two much-needed pieces: An ultra-wide prime and a standard zoom lens.  With the bar set so high with the first three lenses, there were high expectations for the new lenses.  Here, I’ll take a look at that ultra-wide prime: The Fujinon XF 14mm f/2.8 R.  At $899, the XF 14mm isn’t a cheap lens, but it’s certainly not ultra- expensive for a pro-grade ultra-wide angle.  Let’s see if it’s good enough to deserve the price tag.

If you haven’t read my reviews before, I do not generally perform resolution tests or make charts to track quality measures.  I take a real world approach to my reviews and evaluate how a lens or camera handles and works in regular use.

Around the Lens – Build Quality

Like all of Fuji’s lenses for the X series, the 14mm f/2.8 is a very solidly built lens that has echoes of the tank-like build of lenses from the 60s.  The lens is entirely metal on the exterior and is based on a metal mount.  The focus ring is broad, ribbed metal, and has a focus clutch mechanism to switch between manual focus and autofocus.  When the ring is forward, towards the front element, the lens is in autofocus mode, and the focus ring can’t be moved (this also allows a solid section to twist the lens off and on the camera).  When you pull the focus ring back, a focus distance scale is revealed, to work with the always visible depth of field scale.  You can then use the lens in manual focus mode.  When in manual focus mode, the focus ring is well damped and smooth, though mine makes an audible swoosh sound from the focus ring moving against the lens body when focusing.

The aperture ring, present on all Fujinon XF lenses, sits behind the focus ring.  There are click stops every 1/3 stop from f/2.8 to f/22, with a deeper detent for the ‘A’ setting (which sets the camera to automatically select the aperture).  While the ‘A’ detent is nice and solid, the other click stops for the apertures are very light, and the aperture ring on the 14mm is quite loose, making it very easy to accidentally change the aperture.  It’s a very odd thing, and seems to be the case on all copies of the 14mm.  I say odd because the aperture rings on all the other

XF lenses I’ve used are nice and solid.  The one on the 14mm can actually be shifted up and down.  It just seems to be about a half a millimeter too large for the body.  Another frustrating thing is that it seems that there is no actual detent at f/2.8…it just sits there when set to that aperture, making it extremely easy to knock from f/2.8 to f/3.2.  It’s an unforunate build issue on an otherwise extremely solidly built lens.

The Fujinon 14mm f/2.8 is not a small lens, nor is it huge.  It’s bigger than many mirrorless lenses (and far larger than something like the Olympus 12mm f/2 for Micro 4/3), but it’s still quite a bit smaller than a 21mm f/2.8 ultra-wide for full frame.  Ultimately, the size and weight balance well on the X-E1, and it still fits quite well in my small bag that I use for my Fuji kit.

The 14mm f/2.8 has rather quick autofocus. I’m sure part of this is due to the shorter travel an ultra-wide lens requires, but among the Fuji lenses, the 14mm f/2.8 focuses among the fastest.  It is also very accurate.  I have not had some of the focus failure issues with the 14mm as often as I have with some of the other Fuji lenses.  It tends to focus quite quickly and surely.  While not a macro lens by any means, the 14mm is capable of focusing very closely, to about 7 inches from the sensor plane, which is about 4 inches in front of the lens.