If you’ve been to this site over the past few days, you probably saw (or came to the site because of) my comparison between the Panasonic Leica 42.5mm f/1.2 Nocticron and the Fujifilm 56mm f/1.2.  These are two absolutely stunning portrait lenses for their respective systems, and users on both sides ought to be happy.

However, I’m in a situation that is unusual for me: That of updating and re-evaluating test results.  If you read that article when it was published, you may have noticed that while both lenses were very good, the Panasonic Leica had a little bit of an edge.  Then something happened to make me re-evaluate that.  Let me explain. 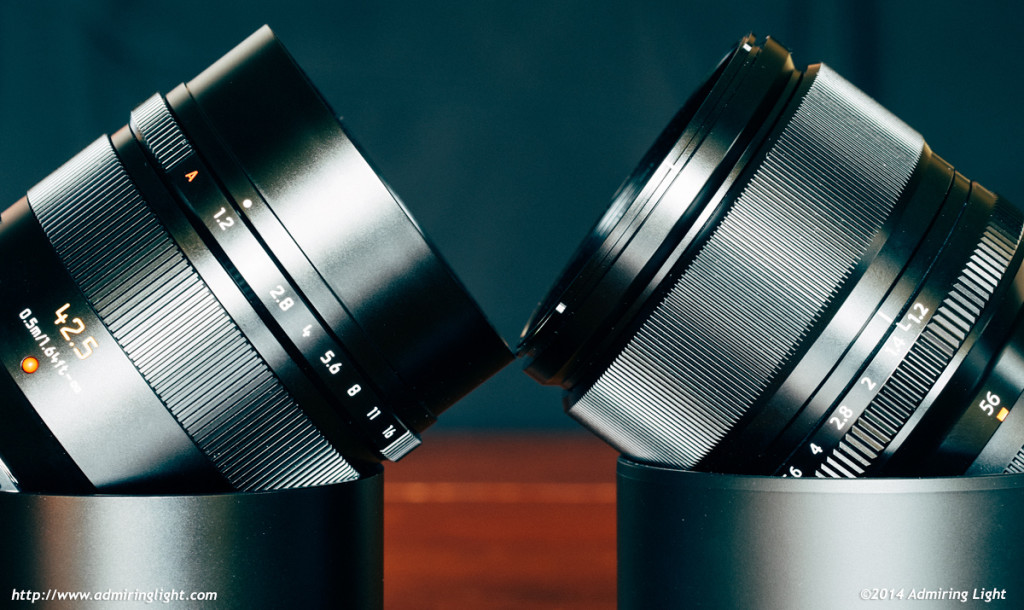 When I first received my Fuji 56mm f/1.2, the focus motor exhibited an odd, relatively loud, squealing sound during focusing.  I was bummed that I had received a lemon and was set to return the lens and wait in the queue again for another one to become available.  However, after a few hours of shooting, whatever was making that noise stopped making that noise, and the lens seemed to focus normally and quietly.  Since the noise never returned, I thought maybe a part didn’t get quite enough lubrication at the factory, and that usage had caused the lubrication to get to the right spot.  Overall, I found the focus on the lens to be quite accurate, but I did have some slight misfocuses that I attributed to me simply moving or such.

Then I went out to shoot some city shot and while taking a shot of a statue, with the lens pointed upwards, I noticed I couldn’t get the camera to focus properly.  So I zoomed the viewfinder and focused….and the lens would move to the focus point and then I could physically watch the lens slide OUT of focus.

Turns out, that sound was apparently the clutch in the focus motor frying itself.  The lens would hold focus fine on mostly level aiming, but up or down was a no-go.

Now, before anyone draws any conclusions, let me tell you that EVERY manufacturer has a few lemons make it out of the factory.  Anything this complex has bum parts or poor assembly from time to time.  Over the time I’ve been shooting, I’ve experienced faulty lenses from every manufacturer I’ve shot with.  I had a Canon 50mm f/1.2L that couldn’t focus accurately on anything further than 3 feet and a Canon 35mm f/1.4L with a poorly aligned element, causing half the frame to be blurry.  I had two Sigma 30mm f/1.4s that had focus issues as well.  I had a Tamron 17-50mm f/2.8 that had the front element come loose.  I had two Olympus 12mm f/2 lenses with misaligned optical elements, a Panasonic 45-175mm with a faulty image stabilizer and a Panasonic 14mm f/2.5 that also had a faulty focus motor.  This may sound like I’ve had a lot of bum gear, but over the years, I’ve owned a LOT of different lenses…this is a small fraction of what’s come through these doors.

The whole point of this is, I received a replacement 56mm f/1.2 yesterday, and when I looked at the images, I noticed that not only did the focus motor sound wonderful and work flawlessly, but the optics looked better too.  My first 56mm f/1.2 had a zone of focus at wide apertures, about 80% of the way across the frame, that was softer than the center or corners.  Since it wasn’t a huge deal, and didn’t really seem to affect the images I was taking too much (and it more or less disappeared at further focus distances), I didn’t really give it much thought.  Looking at the MTF charts for the lens, there is small dip there, so I assumed it was part of the lens design.  Well, looking at my new 56mm f/1.2, I now know that the first lens I had, in addition to having a bum focus motor, also likely had a slightly decentered or skewed element as well.  It wasn’t immediately obvious because it was so slight, but it WAS  obvious when I re-ran the new lens through the test setup I performed in that comparison between the 56mm and the 42.5mm Nocticron.

As a result of these findings, I have updated the comparison between the two lenses with the new crops from the new, properly aligned optically, Fuji 56mm f/1.2.  I have also made slight modifications to the wording about sharpness on my review of the Fuji 56mm. You will see it actually makes quite a difference in the results of the ~1m test.  I have not had an opportunity to re-take the portrait test with the new lens, but may update that when I get a chance to properly set things up again.  I can’t take a new portrait test between both lenses because I no longer have my review sample of the Leica 42.5mm.  I apologize for the changing of results, but I thought it most fair to have an accurate representation of what the Fuji 56mm could do.

So…Head on over and view the updated comparison here.