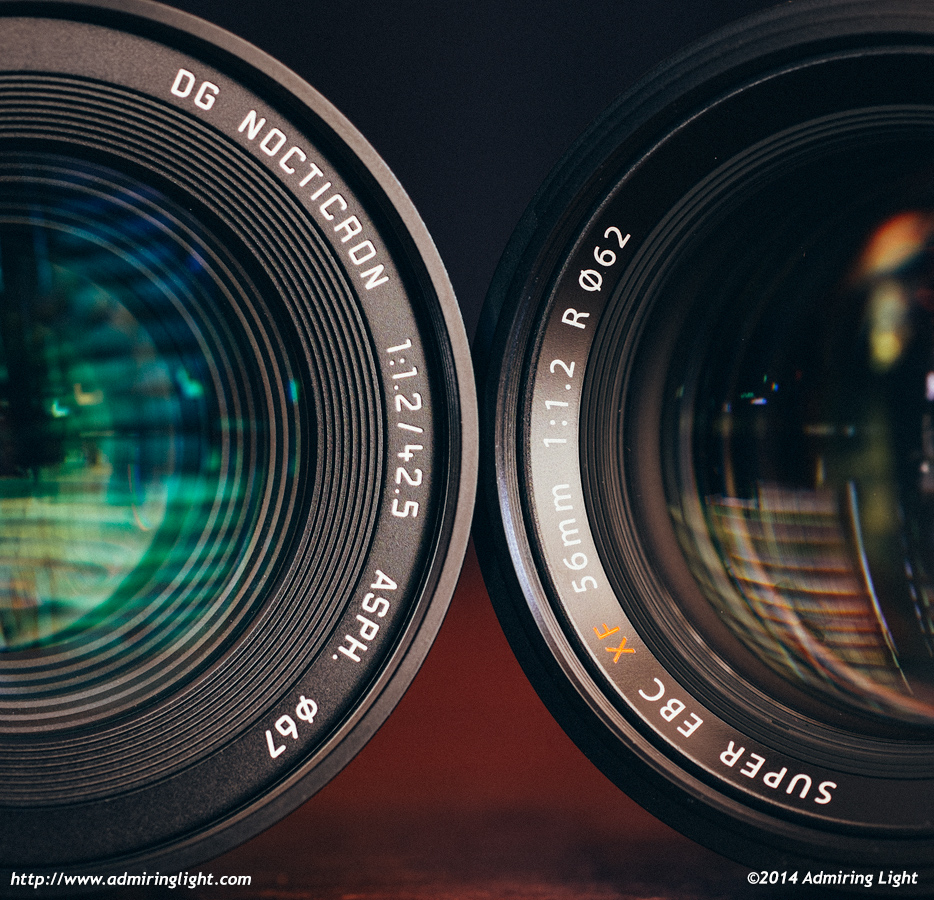 Finally, we’ll take a look at a ‘portrait test.’  My daughter was kind enough to sit patiently while I took photos of her with the two lenses.  These are handheld with flash, taken from the same position.  Unfortunately, sometimes my daughter would like to rock slightly, which is apparent in the 56mm f/1.2 crop, where she moved very slightly out of the plane of perfect focus.

This test has not yet been repeated with my second copy of the Fuji 56mm.  I will attempt to recreate the shot below with my replacement 56mm, and will update the article at that time.  For now, this test shows the results of that first lens.  Given the improvement seen in this focus zone with the properly aligned Fuji 56mm, I’d imagine there would be some change in the resolution at the focus point for the Fuji lens.

Full images are below:

The overall rendering is very nice between both lenses.  WIth the 56mm  at f/1.2, there’s just that little bit softer look from the shallower depth of field.  The Leica performs beautifully, with great subject separation and a really nice look.  The PL’s higher native vignetting at f/1.2 is actually rather desirable and beautiful here (though this can be added in post for the Fuji if desired).  In both Fuji shots, I think the colored bin to the left of the arm (which is actually folded laundry) is rendered smoother in the background than the Leica.

In this case, the Leica shows a bit more resolution than the Fuji at f/1.2, though how much is due to depth of field is hard to tell.  When the Fuji is set to f/1.6 to equalize depth of field, it is then a bit sharper than the Leica.  In any case, there’s plenty of resolution here.  Either lens will do a great job for portraiture.

While not directly tested here, I’ve not shot enough with both these lenses to add a few more observations between these two lenses.

So who wins?  We do!  If you shoot Fuji, you’ve got an awesome fast telephoto in the 56mm f/1.2, and if you shoot Micro 4/3, the Panasonic Leica is phenomenal. When I first conducted this test with my slightly faulty Fuji 56mm, I ruled that the Panasonic was the slightly more corrected lens.  Now with a properly functioning Fuji 56mm, it’s far less clear cut.  Close up, where these lenses would be used for portraiture and the like, the Fuji has a slight edge.  At a distance, the Panasonic does slightly better.

The Leica 42.5mm does have a little smoother bokeh and definitley has higher contrast at wide apertures. It is very apparent that these two lenses are both exceptional. For more detailed information on each lens, take a look at my full reviews of the Fuji 56mm f/1.2 and the Panasonic Leica 42.5mm f/1.2 Nocticron.