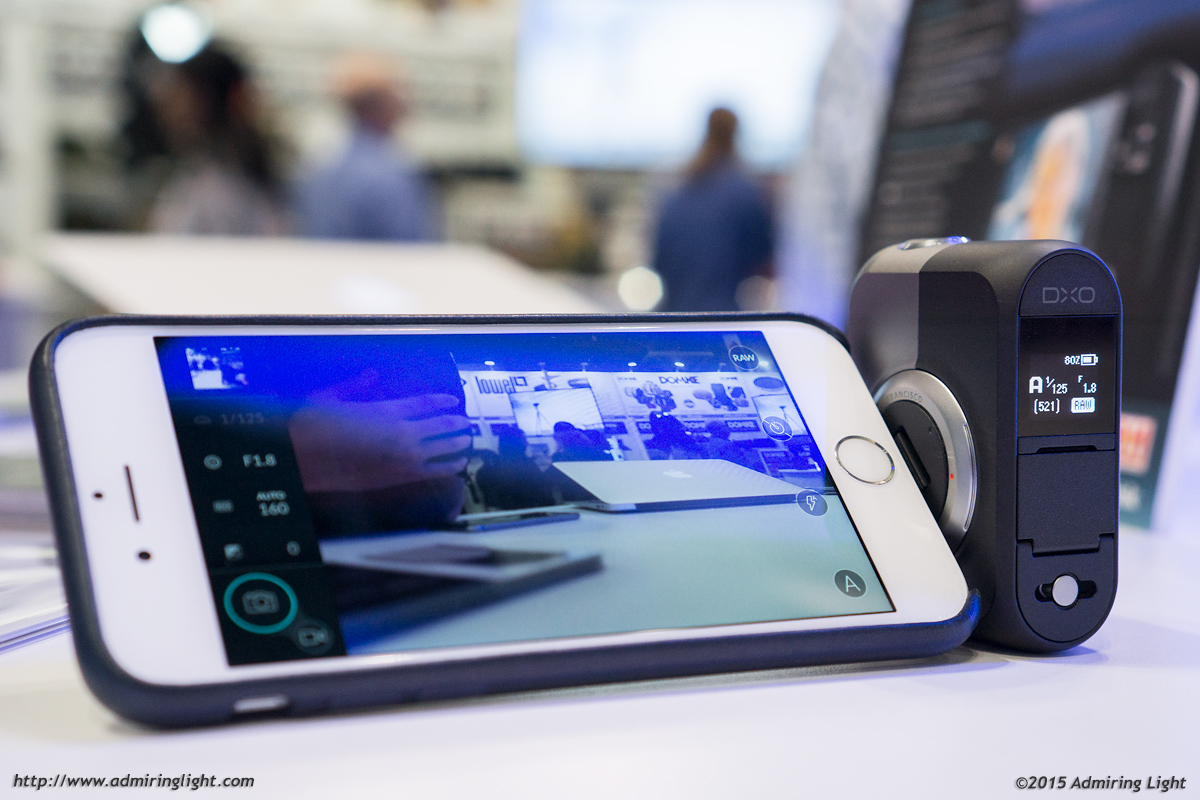 It’s not a mirrorless camera, nor from one of the big players, but the DxO One, DxO’s first foray into hardware, is an intriguing entry to the photographic market. DxO figures that you bring your smartphone with you everywhere anyway, and sometimes you want better quality than a smartphone can provide, but you also don’t want to be saddled with a second camera.  The DxO One can’t solve the second point entirely, but it can make that second camera incredibly tiny. I spent about 15 minutes shooting with the DxO One yesterday at PhotoPlus Expo.

What is the DxO One

If you haven’t heard the press on this little guy, it’s essentially a small camera module with no viewfinder or screen.  It clips to the lightning port on an iPhone 5S and above, and the iPhone becomes the main control interface and viewfinder.  The camera has a 1″ sensor with 20 megapixels of resolution and a fixed 11.9mm (32mm full-frame equivalent) f/1.8 lens.  The lens can stop down in 1/3 stop increments to f/11, providing reasonable control over depth of field.  It can go as high as ISO 51,200, though I wouldn’t recommend it, and the shutter can be used from 1/8000s to 15s, providing lots of control for the shooter.

The overall size of the DxO One is like two stacked mirrorless camera batteries. It’s trivial to pop it in your pocket to have when you want to shoot.  The camera can actually shoot without attaching to your iPhone, but you’re essentially shooting blind at that point. This may be useful for stealth shooting, but it won’t be good for much else. Flip the lighting tab out and it fastens securely to the bottom of your phone.  One potential issue is that the attachment more or less requires you use your phone either without a case or with a minimal one with large cutout on the bottom.  I didn’t have any issues with my Apple leather case, as the entire bottom is cut out, but many other cases would likely need to be removed to use the camera.  This could be a really big hurdle for mass adoption, as most cases that people use are likely to interfere with the connection of the camera.

Once the camera is connected, you can pivot your phone to enable shooting above or below you without problem, provided you’re shooting in the landscape orientation.  When shooting in landscape orientation, the app’s controls put all essential control at your left thumb.  It’s something that may take getting used to for some, but it seemed instantly intuitive to me.  The app is very well designed, with all essential exposure controls accessible and simple to operate.  The shutter is also located on the left, since you’ll want to hold the combination with two hands.  I moved my phone around quite a bit without supporting the camera and it stayed attached, though I wouldn’t recommend doing it the other way around.  If you prefer, you can also use the hardware shutter button for half press focusing and shutter firing just like with any other camera.  The button works fine, but I found my fingers tended to slide up over the camera lens when I used the mechanical shutter button.  While landscape shooting is fairly comfortable, I will say that shooting in the portrait orientation can be a fair bit more awkward.

So how’s the image quality? Pretty darn good.  It’s not going to rival a full-frame mirrorless or DSLR, but it does a very nice job from what I can tell from the out of camera JPEGs. The camera can shoot in RAW as well as a ‘super-RAW’ that combines multiple images, but I couldn’t look at the resulting images in RAW as they are recorded to the memory card in the camera, while JPEGs are passed to the phone.  The JPEGs I took look relatively clean up to ISO 400, with good detail.  Even ISO 1600 files looks decent. There’s a fair bit of noise at that ISO, but still plenty of detail, and the JPEGs are processed well, without too much smearing or overt noise reduction.

In the flare prone Javits Center, the contrast appeared a bit washed out, but otherwise, detail, noise and dynamic range look quite good for a camera this small. The lens looks to be fairly sharp as well, even at wider apertures.  It’s not going to replace your main camera for serious work, but for a pocketable solution for super-lightweight travel?  it’ll do a very nice job.  Quality is about on par with something like the Sony RX100, so not bad at all. At $599, it’s a bit pricey, but it’s a unique solution.  I don’t think I’ll be picking one up, but I’m excited to see where DxO goes from here with this product line.

Take a look at the full size image samples below to take a peek. Click on an image to enlarge and then click the green arrow to view at full size.