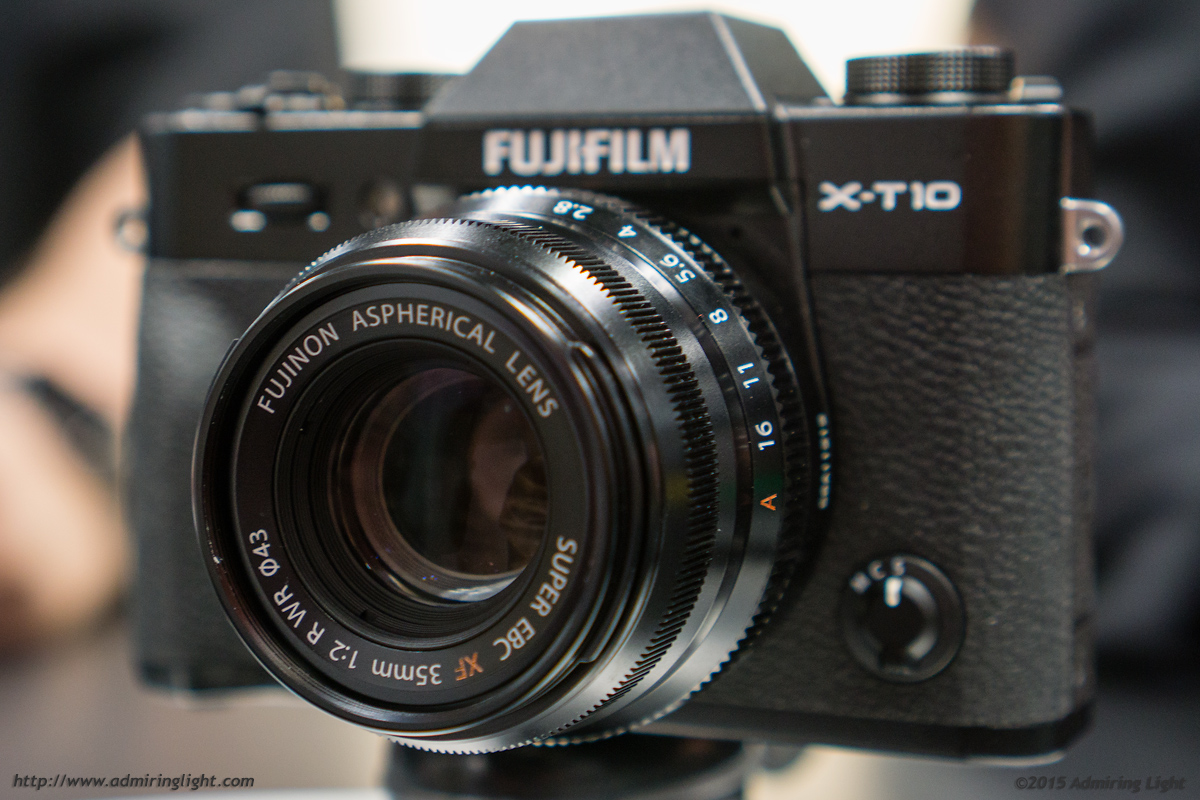 Fuji has had a pretty quiet PhotoPlus announcement list, with only two new products being announced ahead of the show: the compact XF 35mm f/2 WR and the new 1.4x teleconverter.  I had hands on with both products for a short while.

The 35mm f/2 WR is the little brother to the original 35mm f/1.4.  The lens comes in a bit cheaper than the f/1.4 variant, at a price point that seems both reasonable and overpriced at the same time, $399.  The lens is quite compact, with a small front element.  It’s much better looking in person than it is in previous images I’ve seen of it, and the haptics are perfect.  Fuji has been listening about early lenses having poor aperture rings, and like many of the most recent releases, the 35/2 has a wonderful feeling aperture ring that almost feels geared.  The Fuji representative likened it to a high quality safe, and I have to say, she’s right.  The lens is very solid and has internal nearly silent focusing, lending an air of quality. It really feels wonderfully assembled.

I wasn’t allowed to put a memory card in the camera to capture images, but I did scrutinize the zoomed in rear LCD view, and the images out of the 35/2 looked very impressive.  Sharpness at f/2 looked to be outstanding, and perhaps a cut above the 35/1.4 at f/2.  Bokeh looked very nice, and while the was some visible longitudinal CA, it seemed fairly decently controlled.  I understand there are some digital corrections baked into the lens profiles, but from what I saw in my quick tour, this looks to be an excellent lens.

Perhaps the biggest change from the original 35mm is the focusing, which was quite fast and essentially silent.  I feel this lens will be a much better lens to capture shots of moving children or for more discreet shooting than its faster older brother.

The teleconverter is very well constructed and blends in with the lens seamlessly.  The rear mount of the teleconverter has the same rubber gasket surrounding the lens mounting, keeping the weather sealing of the 40-150mm intact.  I asked why Fuji does a surrounding gasket rather than a pressure gasket and they said it was because pressure gaskets wear over time, while the surround does not.

Again, I couldn’t take pictures back with me from the 1.4x TC, but when used on the 50-140mm at maximum telephoto and f/4, Images looked pretty good on the rear LCD.  You can tell that there’s some mild loss of sharpness and contrast, but it still looked quite good.  The bokeh maintained smoothness, though specular highlights appear to get clipped towards the edges of the frame.  It looks to be a nice addition to the Fuji X family.

Unfortunately, Fuji did not have new mockups on display of the future XF lenses, which left me mildly disappointed, but the 100-400mm should be out in early 2016.  The representative noted that April was a likely target date.

That’s all from the Fuji booth.  Stay tuned for more news from PhotoPlus!