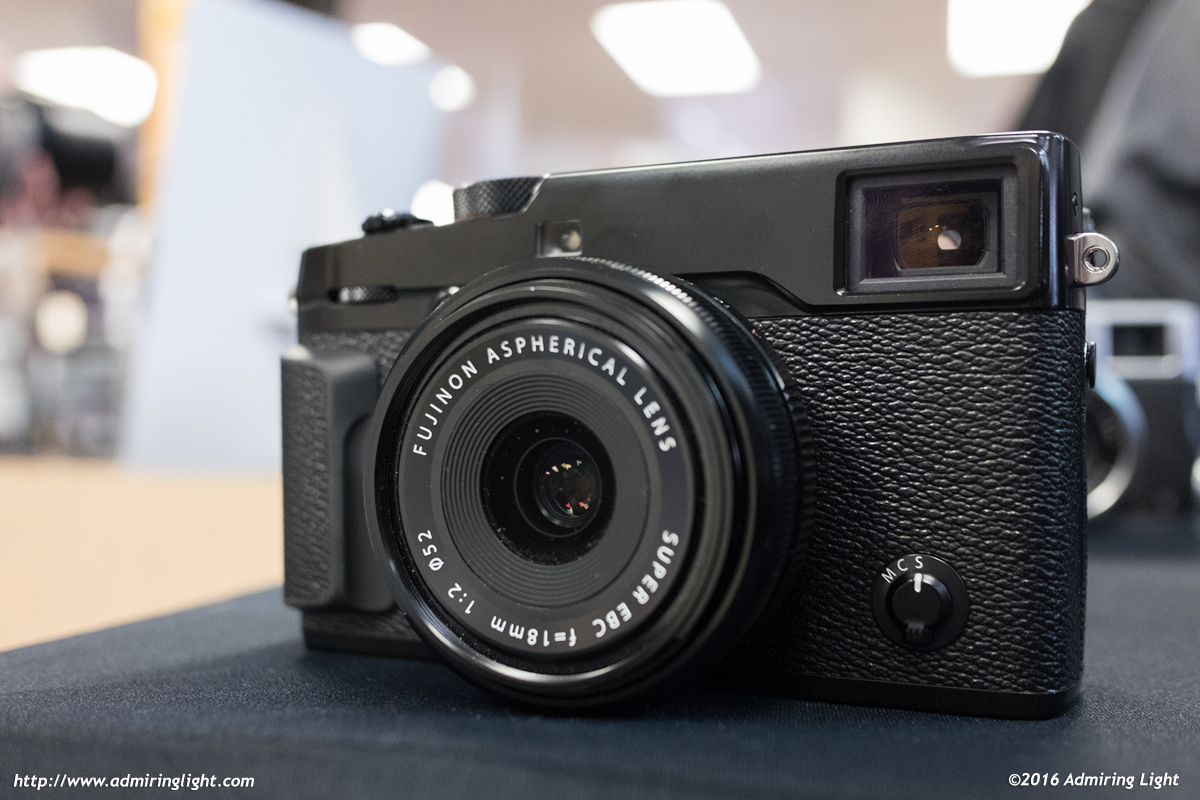 Today, the fine folks at Fujifilm brought the new releases to my local camera store, Midwest Photo Exchange, for some hands on interaction with the latest Fuji releases, including the X-Pro 2, the X70 and the new 100-400mm f/4-5.6.  I spent a fair bit of time with each camera, but of course this falls well short of ANY sort of review, but I thought I’d share my impressions of these new items.  I hope to review the X-Pro 2 as soon as I can get my hands on a copy, but the 100-400mm will be in my hands in just a few days, so look for that review in around two weeks time.  Let’s dive in!

Of course, the biggest release on my radar is the long-awaited X-Pro 2, and I was excited to get my hands on the pre-production X-Pro 2 that was available today. I was not an X-Pro 1 shooter, so I didn’t have a reference point for size and weight aside from some minor handling here and there.  With reports that the Pro 2 is slightly bigger, I expected it to be a heavy camera, but it is most definitely not.  It feels like a quality piece, but is lighter than it looks.  The new grips on the X-Pro 2 and the X-E2s are very nice, with a very grippy rubber on the edge of the hand grip area.  It fell comfortably into my hand immediately.

Operation is very similar to many of the existing Fuji cameras, but with a few key differences.  First, and most obvious is the new ISO dial, which is integrated into the shutter speed dial.  You operate the ISO dial by pulling up on the outer rim of the shutter speed dial, which allows the ISO to be changed, viewable through a small window.  This mechanism is quite fluid and feels rather robust.  I wasn’t sure if I was going to like this, coming from the dedicated ISO dial on my X-T1, but I think I could really like it.

The next big change is the rear joystick, which moves the focus points around.  I was surprised to see that the focus point selection doesn’t appear to actually cover the entire sensor: the point grid is actually overlaid on the central 80% of the frame or so, with the larger phase-detect area then taking up around half of that space.  This really isn’t a change from any of the current Fuji cameras, which also can’t focus right to the very edge of the frame, but it becomes much more obvious when you see the dense grid of 273 focus points.  The joystick handily moves between focus points in whatever direction you push, and will continue moving if you hold it to one direction.  The joystick can be pressed to activate a function as well.  This was set at the time I used it to change SD card slot settings. I haven’t used a camera with a joystick since my Canon 30D, so it would take some time for me to adjust, but it’s something I think I’d really enjoy using.

Despite being weathersealed, the X-Pro 2 has two clickable dials, with one on the front and one on the back.  These dials are quite thin, and I wish they had a bit better tactile feedback, but they worked fine. With the pressable rear dial back, the Focus Assist button found on the X-T1 is gone again.  The exposure compensation dial on the X-Pro 2 is large and moves easily, so there’s no worries about one thumb use like there is on the X-T1.  Overall, I quite liked the control layout in my limited time with the camera.

Now let’s move on to that hybrid viewfinder.  The X-Pro 2 is unique in that it features both an EVF and an optical viewfinder (OVF), and much like the X100T, it melds them with the unique EVF overlay patch on the optical finder.  I haven’t used an X-Pro 1 much at all, so using the OVF with the X-Pro 2 felt a bit new.  The frame lines adjust and the magnification changes automatically when switching between wide-angle or short telephoto lenses.  The viewfinder is fairly good-sized and the frame lines generally stay outside any visible portion of the lens that can be seen; even with the 90mm f/2.  The 90mm f/2 is the longest lens I’d want to use with  the OVF, as the frame lines are fairly small with this lens mounted, but things work well.

Focus points are scaled appropriately for the lens and moving focus points felt fluid in the OVF.  The unit I was handling was a pre-production unit,  and I may have run across a pre-production bug that I certainly hope is fixed in the production camera. I noticed on this body that the AF point that was selected didn’t match up exactly with the EVF overlay patch showing the focus point. (the EVF overlay showed the actual area of focus being used).

If the OVF isn’t your taste, or if you’re using very wide or very long lenses, the built-in EVF comes to the rescue.  I found the EVF to be very good.  It’s specced as being the same size as the one in the X-E2, but for some reason it felt larger to me.  In any case, the size is plenty big enough.  The EVF is bright and clear, and here, of course, the focus points were very accurate.

Speaking of focus, I wanted to see how the new AF system compared to the latest system on the X-T1, X-T10 and X-E2.  I was in a fairly dim environment, but I have to say that focus didn’t seem appreciably faster than what I’m getting with FW 4.0 on my X-T1. It was definitely fairly quick when in the PDAF area, though. Of course, this would require much more extensive testing, which I will do when I review the camera.  I did notice that focus was faster when the EVF was in use than it was when the OVF was active, which I found interesting.

One final note.  While I wasn’t allowed to put my memory card in the X-Pro 2 due to it being a pre-production model, I was able to get an idea of quality on the excellent rear screen and things looked very nice to me.  High ISO smearing of skin tones is gone, and noise seems very well controlled, even at very high ISO.

The upshot of my hands-on with the X-Pro 2 is that it appears to be a very exciting body.  I’m really looking forward to reviewing this camera, and will put it through its paces at the first chance I get.

I spent a bit of time with Fuji’s newest APS-C compact, the X70.  This little camera is sort of the ‘little brother’ to the X100T, and while it lacks a viewfinder, it features a tilting rear touchscreen (the first on a Fuji camera), some nice controls and a high quality 18.5mm f/2.8 lens.

The X70 is a fairly small and slim camera, and it manages to feel nice in the hand too. It’s fairly quick to focus, though I didn’t do any extensive testing.  The touch screen can be turned off or used to fire the shutter or select focus points.  Sensitivity on the touch screen felt good to me.

The lens, though incredibly thin, has two control rings on it.  One is the standard aperture ring, which moves fairly well (though not as nicely as the latest Fuji primes) and allows you to select the aperture in 1/3 stop increments.  Ahead of that is a thin rotational ring that can be set to a few different functions. The unit I tried had the front ring set to switch the ‘digital extender’, otherwise known as a crop, to the field of view that a 35mm or 50mm equivalent lens would show.

I was allowed to take several images with the camera, and image quality looks similar to all the other existing Fuji X-Trans cameras, which is pretty darn good.  The lens looks to be very high quality, with nice bokeh and excellent sharpness, even wide open.  The shot above and the first shot of the X-Pro 2 on this page were both taken with the X70.

The final hands on I did was with the brand new super-telephoto zoom lens, the 100-400mm f/4.5-5.6 OIS.  This lens is fairly large as you’d expect from a 100-400mm zoom, but it’s actually a bit smaller than I expected. It’s just an inch or so longer than the 50-140mm f/2.8 (though notably larger in diameter), and it’s surprisingly light for its size.  I was expecting a far heavier lens.

I tested it a bit inside, and the images looked pretty darn good to my eye, even at 400mm and f/5.6.  What’s truly incredible, though is the stabilizer.  I was handholding this lens at 400mm and getting sharp shots at 1/25s and with the 1.4x teleconverter at 1/40s.  That’s 5 stops of stabilization without a problem.

As I said, image sharpness looked great.  Here’s a quick test grab to give you an idea (obviously not an art-worthy shot).

It looks to be a very impressive lens at first blush.  As I mentioned earlier, I have a review sample coming next week, so I didn’t spend too much time with the 100-400mm, as I’ll have plenty of time to stretch its legs next week.

So, that’s it for today.  I was glad I got a chance to take a quick peek at the new gear.  Stay tuned for upcoming reviews!