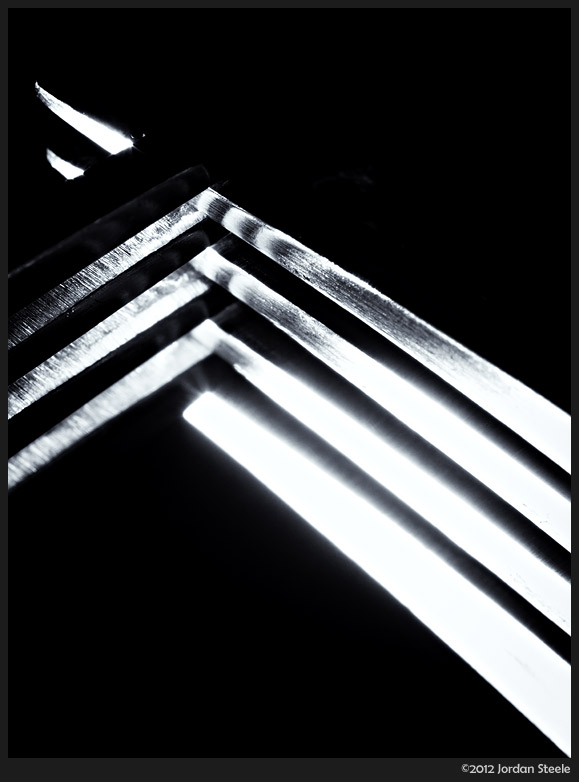 There are days when you need to express your creative side and get out and shoot, but then you look outside, and it’s just a dull, dreary day, and you don’t have time to go to any favorite places.  Maybe you’re stuck inside and can’t leave because you have to do laundry all day.  Whatever the reason, you can’t go out and shoot, but you really want to make some pictures.

When I’m in this mood, I generally look around the house for interesting things and see if I can come up with something interesting.  Sometimes if there’s flowers around I”ll do some posed flower shots, pleasingly lit.  Sometimes I’ll do product photography, and other times, like yesterday, I just grab some random items and try and coax some neat abstracts out of them.

So, when I was looking around the house yesterday, I spied a red tin that could be used for a semi-reflective surface with a pop of color, and then I grabbed two small forks, a white piece of foamboard and my black portrait portfolio (as a black background.)  I grabbed my GX1 with 45mm macro lens, my flashgun, and my Canon off-camera shoe cord (which has the same pinout as Oly/Panasonic, so works just the same for TTL flash exposure off camera.)  Normally I grab my tripod for these sorts of things so it’s easier to set up, but I was feeling lazy yesterday so I didn’t bother, and just hand held everything.

I started with a few shots with a single fork on the foamboard, experimenting with different light angles and trying to get shadows of the fork to coincide with the lines of the tines.  These ended up being pretty uninspiring, so I moved on.

I stood up the red tin on its edge, and laid one of the forks against it, and again experimented with flash angle and power.  Eventually, I found a position for my flash far left and a little up that gave me the light I wanted.  I got very close and focused just on a few tines.  This resulted in the photo to the right.  It’s a passable image…strong lines and such, but it didn’t entirely sit well with me, so I moved on.

I wanted to next explore the meshing of two forks together.  I stuck them together, but it was difficult to stand them in a way that I wanted, while keeping the black background I was going to use far enough back to remain pure black.  I thought for a bit and then grabbed a big bowl full of marbles that we keep out as sort of a table decoration, and shoved the forks in, placed it in front of me, and stood up my portfolio about 8 inches behind the forks.

One thing to note is that I had no idea what the final image was going to be at first.  I wanted to create something where strong lines of the intersection worked with the lighting, but the idea in my head was very vague at this point. I just kept experimenting until I hit on something I liked, and then I explored those angles and lighting further.  I had gotten a few images that looked promising on the camera, and I was about to stop for the day, when I decided to angle the camera underneath the forks.  This sort of looked like you were underneath a huge steel sculpture or cathedral or something, and I took even more shots from this angle.

At the end of the day, I finished feeling I had captured at least a few images that were halfway decent. You can see two of the images on the right from this experimentation, that I ultimately did not view as the true ‘keepers’ of the shoot.

When I downloaded the images, I picked a few with promise and I settled on the shot below as my favorite from the shoot. Strong lines, abstract with the lighting really aiding in the composition of the shot. I like it quite a bit. The little bit of color information wasn’t adding anything to the mix, so I converted it to black and white and added a light Selenium toning that I felt complemented the metal of the forks.

I then took a closer look at the image of the fork on the red background I posted at the beginning of this article.  I really liked the lines of the image and the composition, but I wasn’t too hot on the excessive shadowing of the fork, nor the way the red tin’s textured surface came out.  So I started thinking about ways to preserve the composition, but make the image more powerful.  Nik Color Efex Pro includes a filter called Thermal Camera, which I usually stay far away from, as it typically doesn’t mesh with my photographic style much, but I thought this might be a time to use it.  Sure enough, it provided real visual impact.  It’s not my absolute best work, but I like how it turned out.  Not too bad for 20 minutes and some stuff lying around the house.

I guess the moral of the story is, if you have the desire to shoot, go shoot.  You don’t necessarily need to go to exotic locales or such to make decent images.  Also, don’t be afraid to experiment; it’s how you learn.  Experimentation can be especially useful with lighting.  Compositions that don’t work in one light may look great in different light.  I have done enough experimentation that I can get reasonably close to what I want to achieve with lighting, but I am no means an expert, so I continue to work on it and experimentation is key to this.  It helps me learn how to see light before I even set anything up, and that’s valuable for any type of photography.