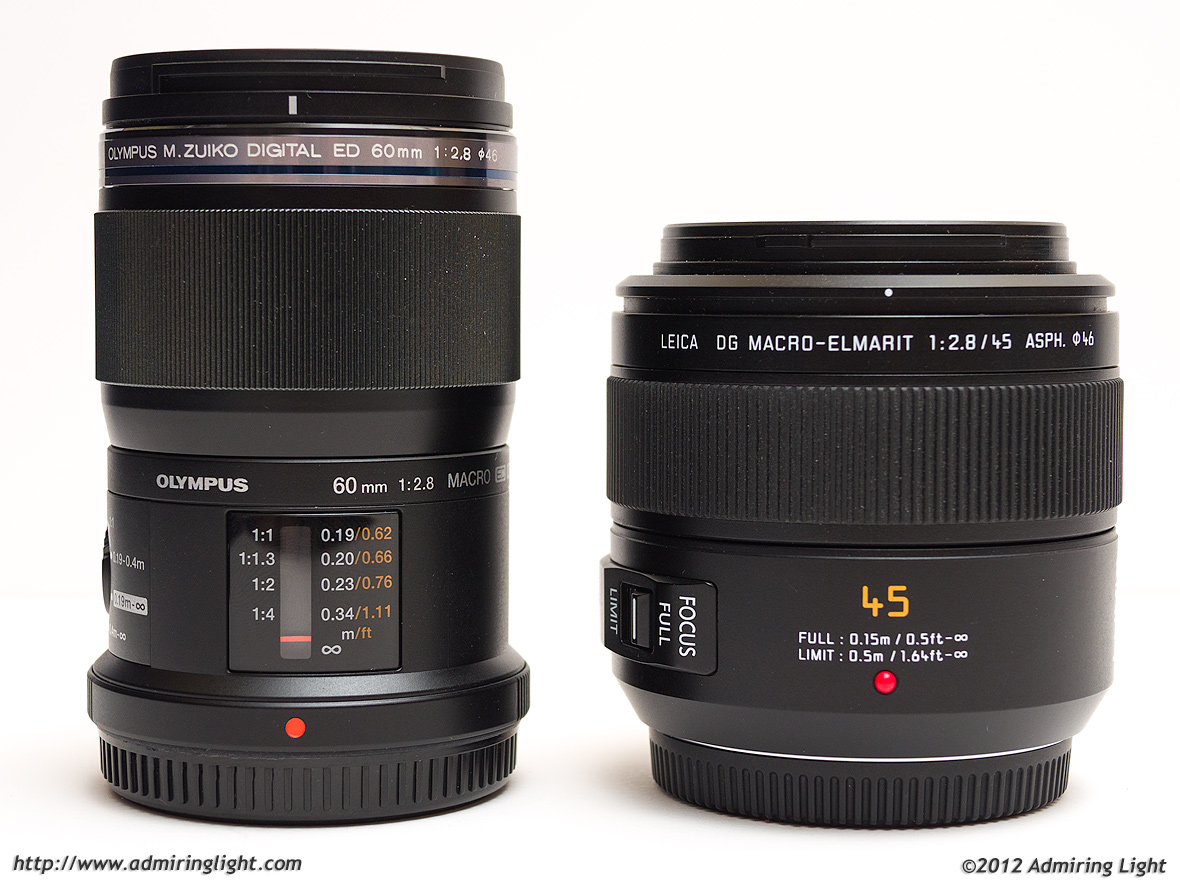 I did a little bit of testing last night with the new Olympus 60mm f/2.8 Macro and I compared it with the only other dedicated macro lens for Micro 4/3, the Panasonic Leica 45mm f/2.8 OIS.

As far as construction goes, they are similarly built.  Both have high-grade plastic bodies built to tight tolerances and feel solid in the hand.  The 60mm is a bit longer.  The 45mm is fatter and a little bit heavier.  The 45mm’s focus ring is ribbed rubber, while the 60mm uses ribbed plastic.  As far as construction goes, the biggest difference is that the Olympus 60mm is a weathersealed lens, so used on a body like the Olympus OM-D or Panasonic GH3, you’ll get some protection against splashes and dust when shooting in the rain or the desert.

Of course, the Leica has optical image stabilization and the Olympus does not.  If using a macro on a Panasonic body or even one of  the Olympus Pens, this will provide better stability for handholding than with the 60mm.  However, used on the E-M5, both lenses will use the 5-axis IBIS, and are pretty much a wash there.  The IBIS of the E-M5 is better than the OIS on the 45mm, so it’s worthwhile to shut off the OIS on this camera.  There is a marked difference in price.  The Leica 45mm carries a premium price tag of $749, while the new Olympus 60mm comes in at $499.

So, last night I decided to test the lenses in a macro setting and at close focus (but not macro) settings.  I brought out the motherboard to my previous computer as the test subject.  I set the motherboard up vertically and used a tripod to position the camera at the right distance for 1:1 magnification.  I manually focused the lenses to 1:1 and adjusted the board and tripod position until the center was dead on using magnified view.  Unfortunately, even doing this, it is extremely difficult to get the focus plane 100% flat between two lenses of different focal lengths, as the camera had to be moved between shots.  As a result, the corners of the 1:1 shot couldn’t be adequately compared…one corner was slightly better for the Olympus, and the opposite corner superior for the Leica, simply because of the very slight distance in the focal plane.

To my eye, the Olympus is ever so slightly sharper, but the differences are close enough that it’s really hard to say for sure that the Olympus is better here.

Next I tried a further shot.  This was set up at a range where the 60mm macro was focused at about 0.6m.  Again, the camera was moved to account for differences in focal length so that the two lenses framed the same scene identically.

Due to the distance being lengthened, it was much easier to position the camera perpendicular to the target and get the whole board in the depth of field of the lenses.

This test was taken using autofocus on the central chip on the motherboard, with both lenses set to f/5.6.

As you’ll see below in the 100% unsharpened crops, the central sharpness is essentially a  wash, with both lenses resolving extremely fine detail on the board.  Click on the image to see the full size 100% crops.

However, look at the corners, and you’ll see the new Olympus 60mm with an edge in corner resolution.

Overall, it’s looking like the Olympus 60mm may have a slight edge in resolution over the also excellent Panasonic Leica 45mm.  I’ll be doing a few other tests in the future, concerning portrait use, chromatic aberration and bokeh.