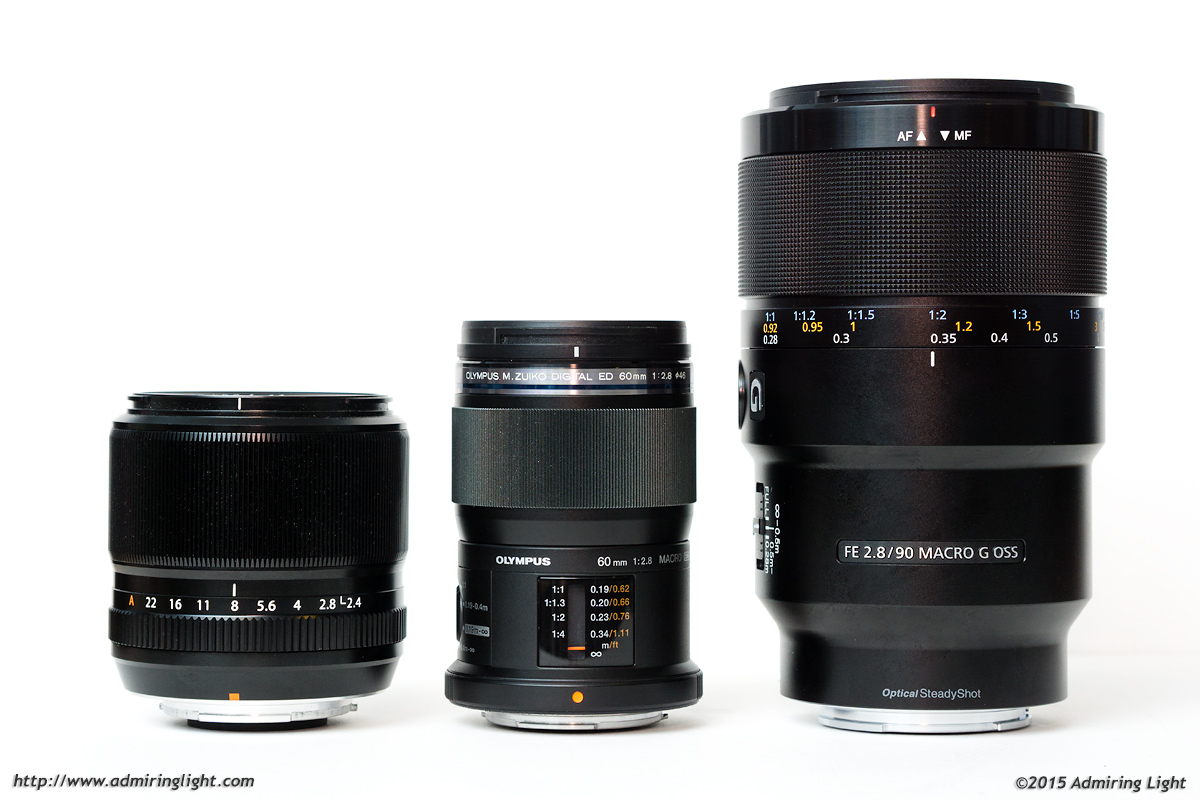 So, a quick and fun little comparison for today.  I have the new Sony FE 90mm f/2.8 Macro in for review this week, and should have that review up in the next few days.  So with one excellent macro lens in for review, I thought it would be fun to do a very quick and down and dirty comparison of this lens with the two macro lenses I own: the Fuji 60mm f/2.4 and the Olympus 60mm f/2.8.  Both are good, and the Olympus, mounted on my E-M5, is my personal go-to rig for macro shooting: it’s very small, light, has outstanding stabilization and brilliant optics.  So, how do the others compare?  Let’s find out.

These macro lenses are all native to their respective mounts and all have excellent reputations.  Of course, there are differences to be had.  First of all, we have different sensor formats.  The Olympus 60mm is designed for the Micro 4/3 system, and such covers the 4/3 sized sensor.  Since this is a 1:1 macro, it also can create the tightest framing of all the lenses.  The Fuji 60mm f/2.4 is designed for the APS-C Fuji X system, and is the only macro lens in this comparison that can’t do 1:1 focusing: it maxes out at 1:2 magnification. The Sony 90mm f/2.8 is a full-frame lens that can be used on both the A7 series of cameras as well as Sony’s APS-C line of E-mount cameras. I tested the Fuji using the X-E2, the Olympus using the OM-D E-M5 and the Sony using both the A7 II and a6000.

Because of the different formats, the lenses also have differing fields of view for normal shooting.  The Olympus 60mm has the same field of view as a 120mm lens on Full Frame, while the Fuji 60mm matches the Sony 90mm’s field of view.  The Sony 90mm on the APS-C cameras has a 135mm equivalent field of view.  For macro shooting, it doesn’t matter all that much.  For the same image height, the Olympus will have the longest working distance due to its shorter length, with the 90mm on APS-C coming very closely behind…the 90 on full frame has the shortest working distance due to the length of the lens.

I only had time to run a quick test, and so I performed the test with all lenses producing essentially the same framing.  This is 1:2 magnification on the Fuji, 1:2 on the a6000/90mm, around 1:2.6 on the Olympus and approximately 1:1.3 on the A7II/90mm set.  I set the cameras up on a tripod, focused manually with magnified view and used 2 second self timer to eliminate any residual shake.  I then resized the Sony files to 16 megapixels to try to normalize resolution between the cameras.  Obviously, the Sony cameras will be capable of slightly higher resolution due to their 24 megapixel sensors.

Below are 100% crops at full stop aperture clicks from f/2.8 to f/8.  Click on the image to view at full size. Well, I guess I should have expected this.  There’s really very little difference between any of them.  The one thing that can be seen is that the Fuji is the weakest of the three lenses.  It’s producing good results here, but both the Olympus and the Sony are producing slightly sharper images.  I maybe see a slight edge to the Olympus at f/2.8 and a slight edge to the Sony stopped down, but it’s really, really close.

Next I took a quick look into the corners.  I’m looking only at f/2.8 and f/8 here, and you can see that the Fuji is again last at f/2.8, while the Olympus and Sony are again very close.  At f/8, all the lenses look quite similar, with the Sony having a very slight edge in the corner.  This is the case on both full-frame and APS-C, which tells me that the Sony will likely look great even at 100% on the ultra-high resolution A7R II.

Finally, I did a quick framing at maximum magnification, just to give an idea of how sensor size plays into this.  As you can see, the Olympus at 1:1 can enlarge the scene the most, while the Sony on the a6000 is next.  The Fuji has the lowest magnification, just behind the Sony when used on full frame.  Nothing major to say, but it is an important consideration when looking at macro lenses and systems if you’re a macro shooter. So, this was a quick down and dirty test, and, as expected all are extremely good lenses.  The Sony 90mm is pulling a very impressive performance, though, equaling or even slightly exceeding the performance of the outstanding Olympus 60mm Macro.  Edit: Check out my full review of the Sony FE 90mm Macro.