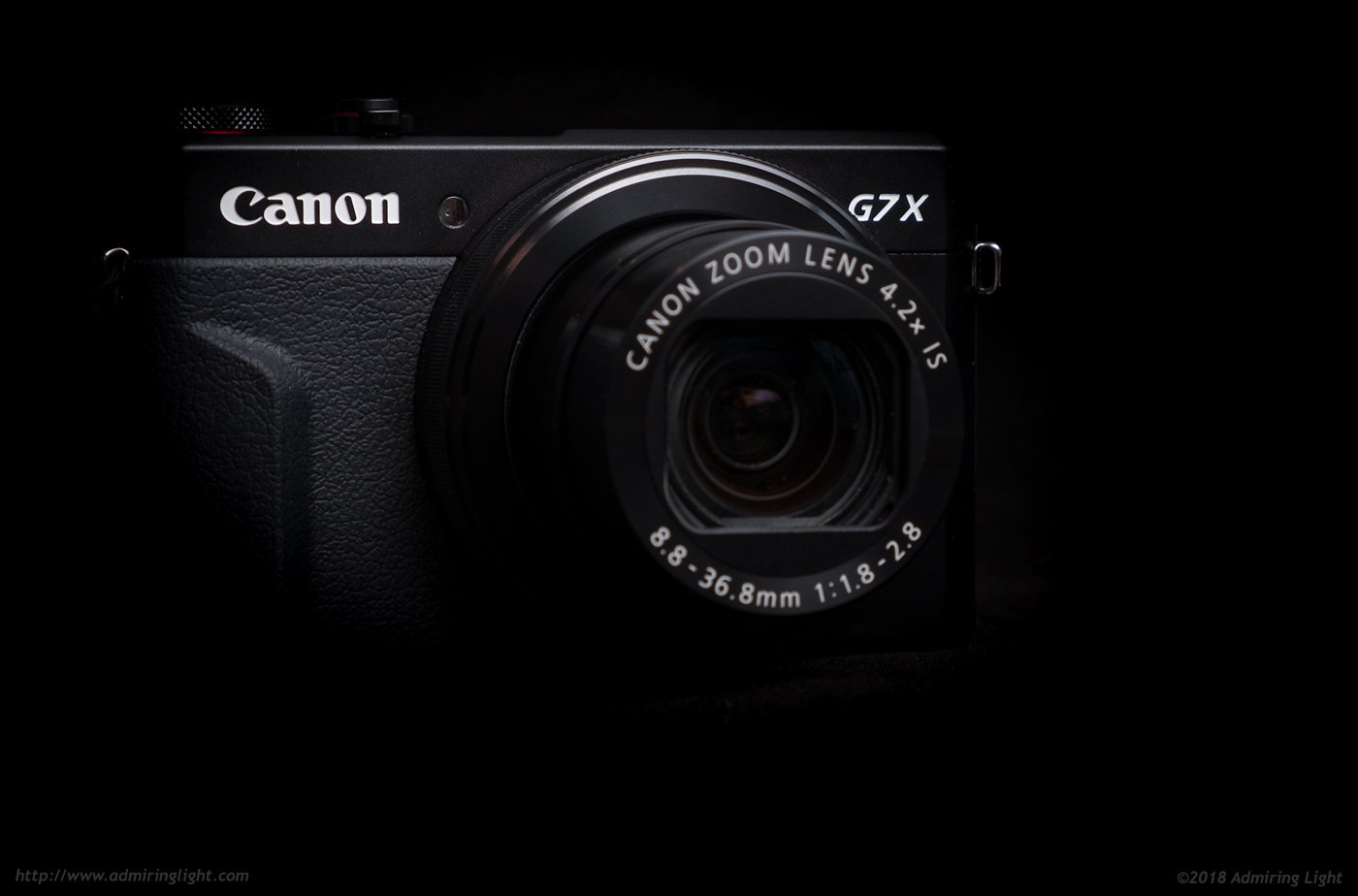 Today I’m taking a quick look at a high-end compact camera. I recently went on vacation with my family to Orlando, Florida, to spend some time taking in the parks at Disney World and Universal Studios. Since this was a family vacation, and not a photographic journey, I didn’t want to carry anything even remotely large. I thought about just using my cell phone, but I did want to capture a bit better quality than that, so I rented a Canon G7 X Mark II for the trip. I had also considered the latest Sony RX100 camera, but as I already reviewed the original RX100, I thought I’d give the Canon a look. I was also tempted by the larger focal range of the Canon’s lens and the more substantial front grip.

Since I exclusively used the camera as a travel companion for some quick shots, this will not be my typical in-depth review, but rather a short mini-review, where I’ll discuss my experiences with the camera during the vacation. I did not go in-depth with all the features, nor try to probe all aspects of its performance. For instance, I don’t believe I ever turned on burst mode, nor did I ever engage continuous autofocus. I also did not take a single video clip with the camera. However, I did take over 300 photos with the G7 X Mark II during my week with it, so let’s dive in.

The Canon G7 X Mark II is one of several advanced compact cameras that features a fast zoom lens, a very compact size and a 20 Megapixel 1″ image sensor.  Almost all of the recent 1″ compact cameras use the same physical sensor, so final image quality is more dependent on processing of the image and lens quality.  The G7 X II is a solidly constructed rectangle, with a slightly protruding lens ring when it is switched off.  Upon turning the camera on, the lens extends and becomes ready for action.

Unlike Sony’s RX100 series of cameras, Canon has fitted the G7 X Mark II with a small rubber grip on the front of the camera, and while fairly insubstantial, it does add much-needed control when handling the camera. The rear of the camera has a small thumb grip, a few controls and a large tilting touch screen that can flip 180 degrees upward to allow for selfie shooting.

In the hand, ergonomics do suffer a bit due to the small size, but the grip makes it a far more comfortable camera to use when compared to the flat finished RX100 series cameras. The body feels rather solid, and the buttons are crisp and tactile to use.  The two concentric dials on the top of the camera provide easy access to camera mode, as well as exposure compensation, while the moving ring on the front of the camera can take on multiple functions, but I mostly used it for aperture control when shooting in aperture priority mode.  I do wish it had some sort of tactile feedback when using it for aperture, as the smoothly turning ring requires attention on the rear screen when changing settings, rather than using touch alone.

There is no electronic viewfinder on this camera, so the rear screen is what you’ve got.  I did find it bright enough for use in all but the harshest sunlight, where sometimes composing could be a bit difficult.

The G7 X Mark II’s autofocus, in my usage, performed predominantly admirably.  In most situations, I found the camera to lock on quickly and surely.  However, in some lower light scenarios, it could hunt a bit before locking on focus, and I had a few instances where the camera got a bit ‘stuck’ at a certain focus distance and refused to move the focus far enough to actually bring things into sharp relief.  However, these situations were few and far between, and for the vast majority of my time with the camera, focus was fast and precise.

Why am I discussing Wi-Fi in a short review like this?  Because it’s one of my most used features when traveling, as I generally do not bring a computer with me.  The G7 X Mark II has built-in Wi-Fi, and like Sony’s cameras, it also features an NFC chip to enable simple tap to connect functionality.  The camera also has built-in RAW editing capabilities, which allow for minor adjustments to the files before creating a full-size JPEG, though the amount of modification that can be done pales in comparison to what Fujifilm offers in their cameras.  When transferring images, the camera can send full-size JPEG images, as you’d imagine. However, in a nice turn, when selecting RAW files that haven’t been converted to full-size, the camera will still send a 2.3MP image from the RAW file.  This is great for quick sharing of snapshots, and doesn’t require the user to fiddle with RAW conversion in camera for an extended period of time.  I found the connection to be easy to set up, and the G7 X was quick to transfer images to my phone as well. It made for a nice way to share images quickly while on the trip.

With an all-in one compact, there’s a lot of factors to discuss with regards to image quality, and for the most part, I was quite pleased with the quality of results I got, given that the sensor is smaller than what I am generally used to.  However, I’m going to start the discussion with the low point of the image quality, and that’s the quality of the G7 X II’s lens.  The lens is an 8.8-36.8mm zoom lens, which has a field of view equivalent to a 24-100mm lens on full frame, with a variable aperture of f/1.8-f/2.8.  The relatively fast lens does allow for some subject separation, but with the 2.7x crop factor, depth of field is similar to a 24mm f/4.8 to a 100mm f/7.5 lens on a full frame body.

The range of the lens is very useful, and the fast maximum aperture and very good image stabilization (which I’ll discuss more of in a bit) allow you to keep the ISO low in many situations.  However, the lens isn’t the greatest lens in the world.  While central sharpness is generally very good throughout the zoom range, edge sharpness is mediocre at best, especially at the wider focal lengths.  At the wide end, even stopped down to f/4-f/5.6, the lens never really gets completely sharp in the outer 1/4 of the image frame, with a bit of detail smearing towards the edges.  The G7 X Mark II produces more even sharpness at the telephoto end of the zoom range, with good sharpness into the corners.

Bokeh is unremarkable, with a bit of nervousness throughout.  Color and contrast response is quite natural and in combination with the sensor provides quite pleasing results.  There is some lateral chromatic aberration towards the edges, which can be corrected in RAW conversion.  In all, the lens is good, but falls well short of outstanding.

The sensor performs similarly to other 1″ compact cameras, and provides fairly wide dynamic range, though shadows can show noise rather readily when pushed, and highlights clip a bit sooner than on larger sensor bodies, but overall, I was quite pleased with the dynamic range.  There some fine grain noise at the base ISO of 125, and noise remains fairly low up to ISO 400, with heavier noise that still allows for usable shots up to ISO 1600.  Higher than that can be good for web use, but is too noisy for critical work. However, I very rarely ever needed to use ISOs that high, as even in extremely dark environments, I could rely on the excellent Image Stabilizer to bail me out.

Canon’s IS in this camera is outstanding.  When using proper technique, I was able to get sharp shots at 1/4 second at the telephoto end of the zoom, and as slow as 0.8 seconds at the wide end of the zoom, with a few 1 second exposures showing very minimal motion blur.  As a result, I never had to push the camera beyond ISO 1600 – and that was for the shot below, taken in exceptionally dark conditions in the Knockturn Alley area of the Wizarding World of Harry Potter at Universal Studios.

So what did I think?  Well, it’s a capable little shooter.  It’s an enjoyable camera to use, and I found that the image quality was generally rather good.  I do not, however, plan on purchasing it, simply because I don’t really need a super small compact.  I also became a bit annoyed with the edge sharpness at the wide end of the zoom range.  However, in all other respects it was a solid travel companion.  The camera acquires focus quickly, is easy to operate, has a great zoom range with a fast maximum aperture and outstanding image stabilization, and the sensor is capable of very nice image quality.

The Canon G7 X Mark II is priced at $699, in competition with the older Sony RX100 Mark III, and a fair bit cheaper than the newer Mark IV and Mark V from Sony.  I think if price were equal, I’d probably say the new Sony cameras are the better buy due to the better lens quality, but the Canon does a nice job at its price point.  It’s a quality compact camera, and is definitely worth a look if you’re in the market for something relatively pocketable.