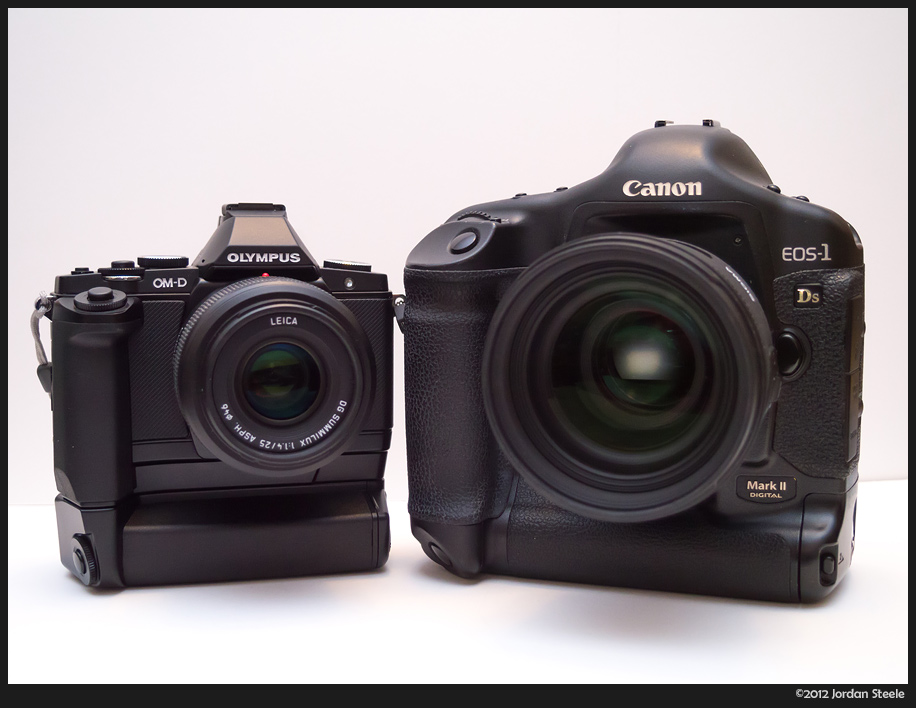 One of my more popular (and controversial) articles has been my comparison of the Panasonic GH2 and GX1 to my old, yet still amazingly good Canon 1Ds Mark II.  The 1Ds II has been surpassed in the full frame arena by more modern cameras, but the image quality out of it is still very, very good, and it was a camera that was (and to some extent still is used by many professionals for it’s excellent output.

The Micro 4/3 format has a distinct disadvantage with regards to photon collection vs its full frame counterparts, simply because it has 1/4 the area to collect photos.  However, 8 years is a long time in the world of cameras; is it long enough to make up the difference in physics?  To test this, I’m going to evaluate how the new Olympus OM-D E-M5 compares to the 1Ds II.

Over the next week or two, I’m going to do a few different tests.  Some will be controlled, like this one, though most of the others will be much more ‘real world’ based.   I’m going to look at dynamic range and tonal response in contrasty scenes, perhaps some night shooting, and so on.   Charts and graphs are nice, but it’s not what I do here. I’m much more interested on how things work in the real world.  This first test is a simple test of ISO noise, and while I have my thoughts, I encourage you to take a look at the results and form your own conclusions.

The first thing I did to evaluate the noise control between the cameras was to see how close the rated ISOs were between the cameras.  I started by setting up the cameras on a tripod about 2-3 feet from my bookshelf.  I then took photos with their respective normal lenses (the Sigma 50mm f/1.4 on the 1Ds II and the Leica 25mm f/1.4 on the E-M5) and took shots at the same settings (both lenses set to f/4 and ISO 200 and the same shutter speed).  I looked at some medium toned areas of the images and I saw how they compared in exposure in Lightroom.  I was very surprised to see that the E-M5 was underexposed when compared to the 1Ds II by nearly 2/3 stop!  Now, I was surprised because I’ve tested the E-M5 vs the Panasonic GX1 in exposure, and they were identical at the same settings, and DxO says that the GX1 and 1Ds II are extremely close in ISO rating.

Hmm…..then I had an idea….Either the Sigma has a higher transmission, the actual f-stop when set to f/4 is slightly different between the lenses (in how much the blades close down), or a little of both.  To settle this, I mounted the exact same lens on both cameras (the Olympus OM 50mm f/3.5 Macro), shot the scene at the exact same settings (with the shot twice as far away on the OM-D to make the framing identical) and then evaluated….and… VOILA! Exposure was within 1/6 of a stop of each other.  Close enough to be trivial.

So, knowing that SENSOR wise, the exposure of the two cameras is extremely close at the same ISO, I went back to the 50mm equivalent lenses and shot with the cameras metered the same.  (the small variations in shutter speed to counteract the difference in lens transmission/diaphragm accuracy should be trivial with regards to noise).I tested the cameras at all comparable ISOs (ISO 200-3200) and then did a ‘push’ equivalence for the 1Ds II for ISO 6400 and 12,800 (under exposing by one and two stops then bringing it up in RAW.) The results are below.  These are all 100% crops of two different areas of the image.  Click the image to view full size for an accurate view.

The very slight difference in perspective is due to the OM-D’s shorter stature on the tripod.

Looking at the crops above, I note the following:

So, can the E-M5 match an old full frame camera in noise performance?  It’s very close, but not quite.  The 1Ds II still holds a slight advantage when viewing the files at 100%.  However, I do think the difference is slight enough that it would be all but invisible in print except perhaps at the very largest sizes.  We’re talking a mild advantage when viewing files at 100% on screen.  To give you an idea of what that means…I’m viewing these on a 23 inch 1080p monitor from 2 feet away.  At 100%, this is equivalent to viewing a 48″ wide print from 2 feet away.  So, these are the differences you’d see on a 48″ print.  At 24″, the differences are essentially nil.  (To see an approximation of this, click here for the same image at half size…equivalent to 50% crops).

Next time, I’ll look at real world performance on a contrasty scene.