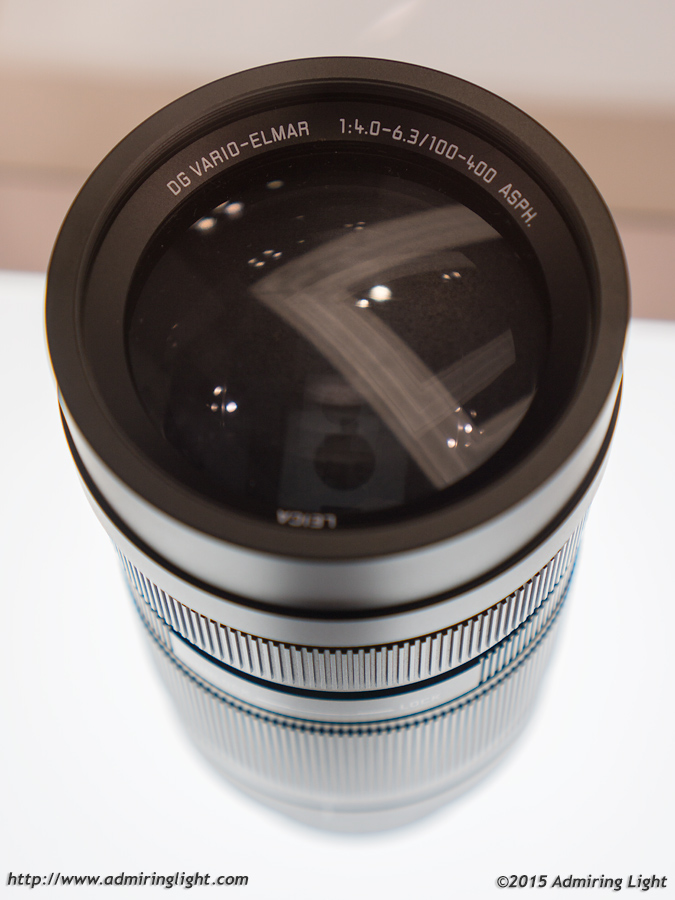 If you’ve been following my PhotoPlus articles so far, you may note that this post doesn’t headline with ‘Hands-On’.  I did handle some Olympus and Panasonic gear, and I’ll discuss, but frankly, neither Panasonic nor Olympus had any truly new products to try out this year.  A rather hum-drum PhotoPlus from the two Micro 4/3 makers.  But I did talk a fair bit with the Olympus and Panasonic representatives, and while there isn’t a wealth of information, I have some information.  On to the news:

The biggest thing upcoming for the two Micro 4/3 manufacturers are their future lens releases that have been announced but not materialized.  Let’s start with Olympus.

The Olympus 300mm f/4 PRO has been in announcement limbo for well over a year now.  I first saw a mockup last year at Photokina, and unfortunately, that’s all we still have: a mockup.

The lens looks much like the mockup presented last year…a typical 300mm f/4 sized lens that I’m sure will be great. The big question…When will it be here?  According to the representative I spoke with, the 300mm f/4 will arrive for sale by the end of this year, so our waiting as nearly at an end. I asked if that meant ‘officially announced’ or ‘product available’ and the reply was that limited quantities should be publicly available before the end of the year.  Let’s hope so.  As it was, they did not have even a final prototype of the lens on hand with real optical elements.  We’ll wait and see.

Panasonic’s big telephoto lens is the upcoming Leica branded 100-400mm f/4-6.3, which also was presented in non-touchable mockup form.  The 100-400mm, I have to say, looks beautiful.  The size looks similar to the Olympus 300mm, which I find to be a very compact form for a 400mm zoom lens.  The build quality appears to be the same construction type as seen on the 42.5mm f/1.2, which is fantastic.  There’s an integrated tripod foot, and the quality of controls looks fantastic.  If you want 800mm reach in a reasonable size, this looks to fit the bill well.

I asked about when the lens was expected to hit the market, and while there isn’t a firm date, the representative thought we’d be looking at mid to early next year, possibly in the April timeframe, though this isn’t confirmed.  Again, while pricing hasn’t been announced, the representative hinted that he thought it would end up somewhere in the $1500 to $1700 price range.

No new Micro 4/3 cameras were announced ahead of Photo Plus.  I did handle both the E-M10 Mark II and the Panasonic GX8, both of which I hope to review over the next few months.

The E-M10 II felt fantastic in my hands.  It honestly had a more comfortable grip than the E-M5 II, and the dials are nice and chunky.  The EVF isn’t as big as the one in the E-M5 II, but it’s larger than the one in the original E-M5, and it looked very nice.  It’s a body that I think will fit the bill for a lot of Micro 4/3 shooters, and I may actually look to swap my original E-M5 for an E-M10 II sometime in the near future.

I also took a quick spin with the GX8, which has definitely grown over from the GX7. The camera felt fairly good in the hand, though I prefer the grip of the G7 to the higher-end GX8.  The controls are definitely nice on the GX8, however, with knurled metal exposure compensation and mode dials with other controls within easy reach.  The big upgrade, aside from a new sensor, is the EVF, which is simply enormous and quite clear.  It’s definitely up there with the top EVFs in the market.  Panasonic has thrown so many features in these cameras as well, and are doing a great job fleshing out the camera line.

There’s unfortunately not much more to report from the Micro 4/3 world here at PhotoPlus.  A bit of a letdown with regards to this system at the show, but some promising items are on the horizon.