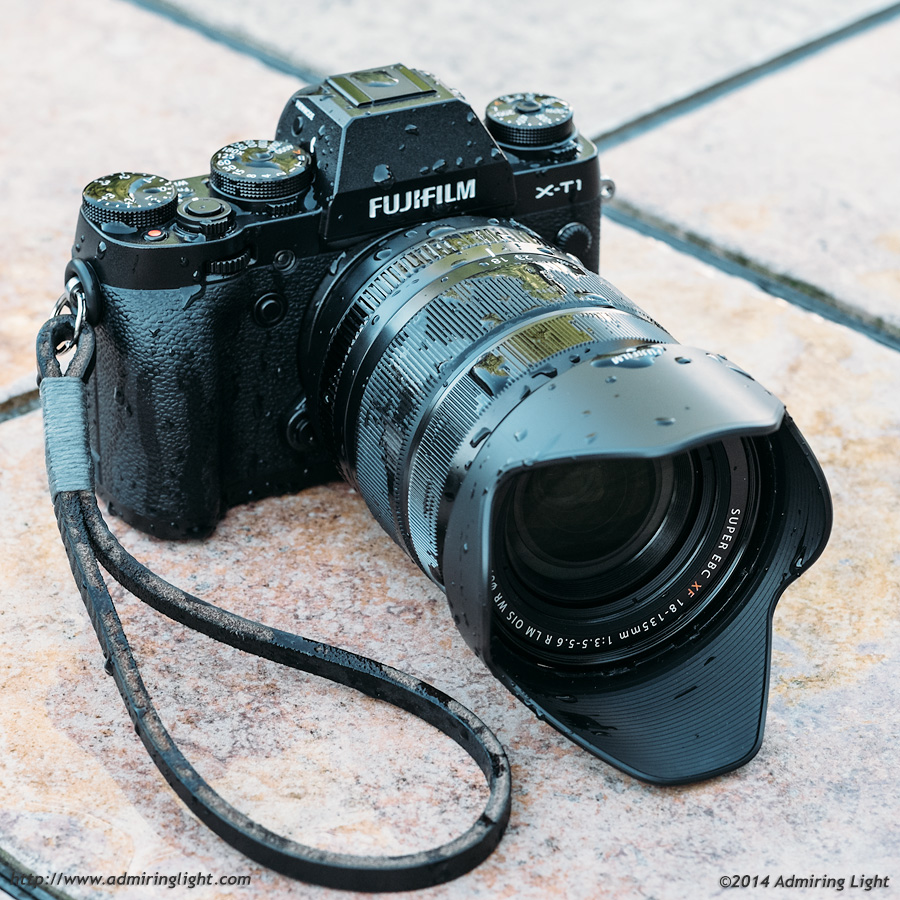 Fuji has done a great job in building a robust lineup for their X-Series mirrorless cameras, but despite releasing the weathersealed X-T1 earlier this year, they hadn’t created a weathersealed lens until now.  The XF 18-135mm f/3.5-5.6 R OIS WR is a wide range super-zoom lens that features Fuji’s new Weather Resistant tag, with rubber gaskets around all points of entry and even a novel ventilation system to allow air to enter and leave the lens without sucking in moisture and dust.  The lens covers a great range of focal lengths, equivalent to the field of view that a 27-205mm lens would have on a full frame camera.  The one big up front question with this lens is whether it’s worth the rather high $899 price of entry.  Let’s take a look.

If you are familiar with Fuji’s 55-200mm f/3.5-4.8 telezoom, then you already know predominantly how the new XF 18-135mm is constructed.  The lens has a similar build with a metal mount, high quality plastic body shell, aperture ring, well-damped and rubberized zoom ring and a metal front filter ring and hood bayonet ring.  However, the 18-135mm is a weather resistant lens, and as such, there are subtle differences in the construction and feel.  The aperture ring still moves similarly to those on the 55-200mm or 18-55mm, but there is a different feel to its motion due to the weather sealing.  Likewise, the zoom action is mostly similar, except near the end of the zoom range.  There is gasketing in the zoom extension mechanism to prevent water intrusion when using the lens at longer focal lengths, and you bump up against it as you near 135mm.  As a result, there is a spongy resistance at the long end of the zoom that makes it more difficult to turn to 135mm than to other focal lengths, which, to be honest, is a bit annoying.

The lens is fairly large for a mirrorless lens, and weighs slightly less than the 55-200mm.  It’s not a lens that I would recommend for use on the small X-M1 and X-A1 bodies, but it handles fine on the X-T1 and the X-E2 (with the added grip).  Considering the range, its primary use will be as a single lens solution that can take the place of multiple lenses when you want to simplify what you’re carrying, and due to that, its size isn’t a major issue.  The lens does extend towards the long end, adding several additional inches to the length.  Below is a size comparison of the lens with the 18-55mm f/2.8-4 and the 55-200mm f/3.5-4.8.

As has been mentioned, the XF 18-135mm is Fuji’s first weather-sealed lens.  There are gaskets around moving parts on the lens, a rubber gasket around the lens mount and a unique ventilation system to ensure water and dust don’t get sucked into the lens while zooming.  I took the lens out on my X-T1 in some rain to shoot for a few minutes to test out the sealing, and for the most part, it performed well.  No moisture made it into any part of the lens or camera body, and everything worked flawlessly.

However, I am disappointed in the sealing at the lens mount.  I’ve owned several weather sealed bodies and lenses, and most use a thin rubber gasket that presses up against the lens mount on the camera to create a seal.  Oddly enough, the rubber gasket that surrounds the mount on the 18-135mm doesn’t actually make contact with the face of the lens mount on the camera.  Instead, it surrounds the metal of the camera mount.  Unfortunately, this relies on the rubber properly fitting flush to the outside of the mount, and the problem is that it doesn’t fit flush to the surround.  As a result, the rubber mount gasket only serves to deflect the water around the mount instead of actually creating a seal against it.

After I came in from my brief shoot in the rain, I toweled off the lens and camera.  To my surprise there were several drops of water that had made it past the gasket and were sandwiched between the metal mounting surfaces of the lens mount.  While no water made it beyond the lens bayonet and into the camera, I have to think that if you’re shooting in heavy rain for more than a few minutes, the potential for water to make it into the camera is there.  So while the weather sealing for the 18-135mm is good enough to keep your lens and camera safe in some light drizzle or if you are caught unexpectedly in a storm, I would not rely on it for protection of your gear in a steady rain.  Frankly, I’m quite surprised that this oversight was made considering the apparent quality of the sealing everywhere else on the lens.

Like the other recent Fuji zoom lenses, the 18-135mm features a very quiet linear motor (the LM in the lens designation).  This gives the lens rather quick focusing capabilities. In good light, focus is fast and accurate, and can be used for most any purpose, including continuous autofocus outdoors.  In lower light, the slower f/5.6 maximum aperture at the long end limits the light that can be used for focusing and results in the lens slowing down a bit.  In dark conditions, autofocus is fairly slow, but in most situations, I had no complaints.

One thing that is excellent about the 18-135mm is the ability for the lens to focus to .48m at all focal lengths.  As a result, the lens is excellent for shooting closeups, and this ability truly makes the 18-135mm a versatile lens. While you’re not going to shoot macro images with the 18-135, the maximum magnification is approximately 1:4, which is great for closeups of flowers or larger insects like butterflies or dragonflies.

One of the big features of the 18-135mm is its new refined optical image stabilization (OIS). Fuji is claiming an unheard-of 5 stops of stabilization for this lens, and for the most part, it’s a fairly accurate claim.  While I wasn’t able to regularly achieve 5 stops of handholdability (which is equivalent to around 1/6 second at 135mm), I was able to consistently get sharp shots at 1/10 second at 135mm, for a gain of more than four stops, and I did occasionally get a 1/5 second sharp shot at the long end.  It is among the most effective optical stabilizers I’ve used.