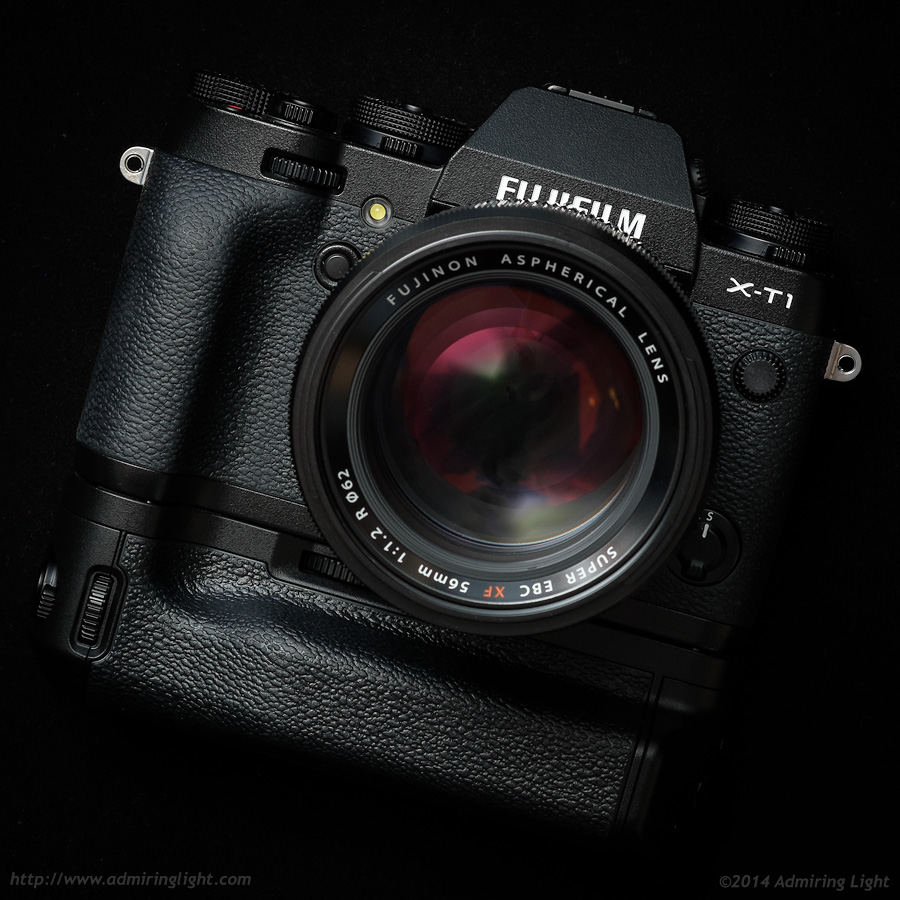 One accessory that is common among most manufacturers is an add-on vertical grip with duplicated controls and space for one or two extra batteries. Fuji didn’t provide one of these vertical grips for any of the rangefinder-styled X-series cameras, but with the SLR-styled X-T1, the vertical grip has followed. I’ve had the VG-XT1 vertical battery grip for my X-T1 for a few months now, and I thought I’d share the pros and cons of this important accessory.

Battery grips for mirrorless cameras are often met with one of two different schools of thought.  Some view them as essential to add better handling to cameras that are a bit too small for their hands, while others wonder why you would intentionally make a camera larger that is designed to be small.

Well, the reasons for a grip such as this are twofold: First, the grip does allow for better handling, especially with larger lenses.  It extends the regular hand grip, but more importantly adds a vertical grip allowing you to shoot much more comfortably with the camera in the portrait orientation.  Second, the grip contains a slot for a spare battery, which will allow you to shoot longer without stopping for more power.  This can be crucial when you’re shooting events.  So how well did Fuji make the VG-XT1?

The VG-XT1 is a single piece accessory that screws into the bottom of your Fuji X-T1.  The grip is constructed predominantly of high-grade plastics with a slightly textured finish that matches the magnesium body of the X-T1 fairly well.  The grip is covered on all sides by grippy rubber of the same style and texture as the main camera grip.  Like the X-T1 body, the VG-XT1 is sealed against dust and moisture.  When the grip doesn’t contain an extra battery, it’s very lightweight, and adding that spare battery actually helps make the camera balance a bit better.

To attach the grip to the camera, you must first remove the rubber cover on the base of the camera to reveal the grip contacts.  Fuji has added a recess in the grip to store the rubber cover so that you won’t lose it. You then simply screw the grip into the tripod socket using the locking wheel.  Two metal posts insert into the base of the camera to prevent any twisting or flexing.  Indeed, with the grip attached, there is no movement or twisting at all, and the VG-XT1 simply feels like part of the camera. Fuji has provided a lug on the bottom of the grip to attach a wrist strap to, which is the best attachment point when using the grip, as the strap works equally well for both camera orientations.

Fuji did a great job with the ergonomics of the grip, with a nice contour to the vertical grip and a comfortable finger notch near the vertical shutter release.  In fact, it’s good enough that the vertical grip is actually a fair bit more comfortable than the main grip of the camera.  It simply feels great in the hand, and when shooting vertically, it’s significantly easier on your arms, and allows for a more steady shooting position.

The Fuji VG-XT1 duplicates most of the main controls operated by the right hand for use in the vertical orientation.  The most important of these is the shutter release, which sits on top of the grip (when shooting vertically) in essentially the same position as the main release.  While a little shorter in travel, Fuji has done a good job in replicating the pressure for half and full press on the vertical shutter release.

Also present on the grip are the Focus Assist button, the AE-L and AF-L buttons and both front and rear dials.  The dials feel a little less robust than their main camera counterparts, but they operate with similar resistance and fall in generally the same spots as on the camera. The buttons feel the same too, but unfortunately, due to layout restrictions, they are not placed in the same spots.  While this doesn’t bother me too much with the AE-L and AF-L buttons, as I don’t use them all that often, I don’t like how they’ve arranged the buttons with regards to Focus Assist.  I use the focus assist button quite often, especially when manually focusing, and the FA button sits higher than it does on the camera.  In fact, the AE-L button sits in roughly the same position on the vertical grip as the FA button is on the camera, which leads to a lot of accidental AE-L pressing in my case.  In my opinion, the AE-L and FA buttons should swap positions.

It would have been very nice to have a duplicate exposure compensation dial on the vertical grip as well, but I understand the difficulty in properly implementing this. While I eventually adjusted to reaching left for EC when shooting vertical shots, it took some getting used to.

In all, the grip worked very well in real world usage.  I shot a Bar Mitzvah using my X-T1 with the VG-XT1 attached, and the extra battery life and comfort in portrait orientation were very welcome, especially as I was wearing a suit jacket throughout the ceremony, which is awkward to wear when shooting vertical shots without the vertical grip.

The Fuji VG-XT1 vertical battery grip is an accessory that will certainly not be required for most shooters, but is something that is worth checking out if you shoot a lot of events or do other long shoots, both for added comfort as well as a doubling of battery life.  It’s a well made accessory that fits beautifully on the camera and operates well, though a few of the design decisions with regards to button placement could be better thought out.

If you need extra battery life or think you might need a vertical grip for your X-T1, the VG-XT1 is a well executed addition.  If you prefer to keep the camera as small as possible, however, you’ll want to give it a pass.  While the grip is off my camera most of the time, when I need it, I’m very glad that it’s in my kit.  Recommended!