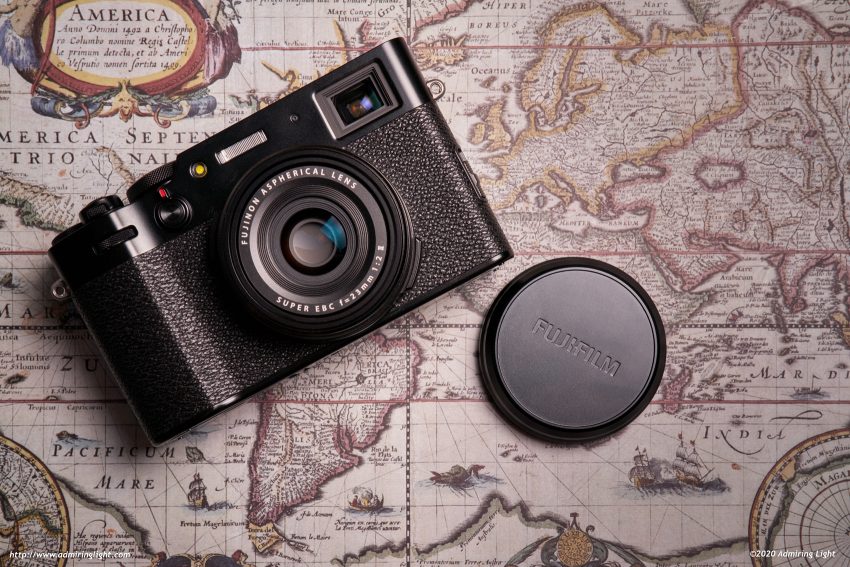 The Fujifilm X100V features the same X-Trans 4 sensor in the X-Pro 3 and X-T4. It’s a 26 megapixel APS-C sensor, and it’s been proven to be one of the better APS-C sensors on the market. The X100 series also sees its first upgrade to the lens since the line was introduced. The lens is still a 23mm f/2 lens, but the optics have been upgraded for better resolution, especially when shooting close up. Let’s dive into image quality.

The new lens does yield some notable improvements, and remedies what was the previous weakness in the 23mm f/2 lens: close up wide open performance. Earlier X100 models showed softness and spherical aberration when shooting closer subjects at f/2, but the X100V’s lens shows very sharp results at all apertures regardless of focus distance. At f/2, sharpness is excellent in the central 80% of the image frame, with a small amount of softening towards the edges. Stopping down a stop or two brings those edges and corners up to excellent levels as well, and the lens is capable of excellent cross frame sharpness at f/4 and smaller.

While a 23mm f/2 lens on APS-C won’t yield huge amounts of background blur, I have to say I really like the performance of the X100V’s lens with regards to bokeh. From a technical standpoint, it’s not excellent. There is some bright ring outlining on specular highlights and a bit of nervousness in busy backgrounds when shooting at moderate distances. However, for my own taste, there’s just something about the rendering that I really like.

The bokeh has a bit of character and the way the sharpness falls off to blur is just excellent. I found myself enjoying the overall way the lens renders for things like environmental portraits, despite the rougher than average bokeh. There’s enough depth of field to show good focus of the subject, and the blur in the background helps the subject pop.

When shooting close up, bokeh becomes much smoother. This is also the case when using the TCL-X100 to produce a 33mm f/2 lens. The shot below was taken from about a foot and a half away, at f/5.6 to gain a bit more depth of field.

The sensor in the X100V is the same X-Trans IV sensor found the Fujifilm X-T4, and that sensor has been very well received for its excellent image quality. Of course, the same is true here. For an APS-C sensor, performance is excellent. Dynamic range is outstanding, and the camera can render highlights and shadows in contrasty light on par or better than any other APS-C camera I’ve used, and better than some full-frame sensors.

As with most X-Trans sensors, tonal rolloff is beautiful, and the transition of colors is smooth and pleasing. Color has always been one of Fujifilm’s strengths, and a lot of that is down to the excellent film simulations. These can be used for a quick modification of JPEG output, but most RAW converters, including Lightroom and Capture One, have native support for them as well. This allows for an excellent starting point when developing RAW images. The Provia simulation is probably the truest to life and provides pleasing, fairly neutral color that really looks lovely in a wide variety of situations. I very much also like the Classic Chrome and the new Classic Negative simulation for shooting candids of people. These produce more muted colors and give a more nostalgic feel to the images.

The X-Trans IV sensor is a 26 megapixel sensor that can resolve high levels of detail. Lightroom has improved substantially over the years at processing X-Trans images, but I find that Capture One is still a significant step up for X-Trans cameras, and is able to extract the full level of detail from the sensor, without the presence of any artifacts from the unique filter array. Noise control is pretty good for an APS-C camera, but there has been a bit of stagnation in the industry with regards to noise for the past few years. The X100V produces relatively clean images up through ISO 800, with ISO 1600 and 3200 showing some fine-grained noise that I find perfectly acceptable for most situations. I also find ISO 6400 and 12,800 to be quite usable, though with some visible noise. ISO 25,600 is a bit too far for everyday use, but can be used in a pinch for small prints or web use. ISO 51,200 starts to fall apart, and I would not recommend using it.

Overall, the image quality of the X100V is excellent. It’s got a high quality sensor and a good lens, and the camera is more than capable of producing extremely high-end results in a compact package. One thing that is starting to feel like a missing item, though, is image stabilization. The X100V lacks image stabilization in both the lens and sensor, and it’s something I miss when shooting with the X100V instead of my IBIS equipped mirrorless cameras.