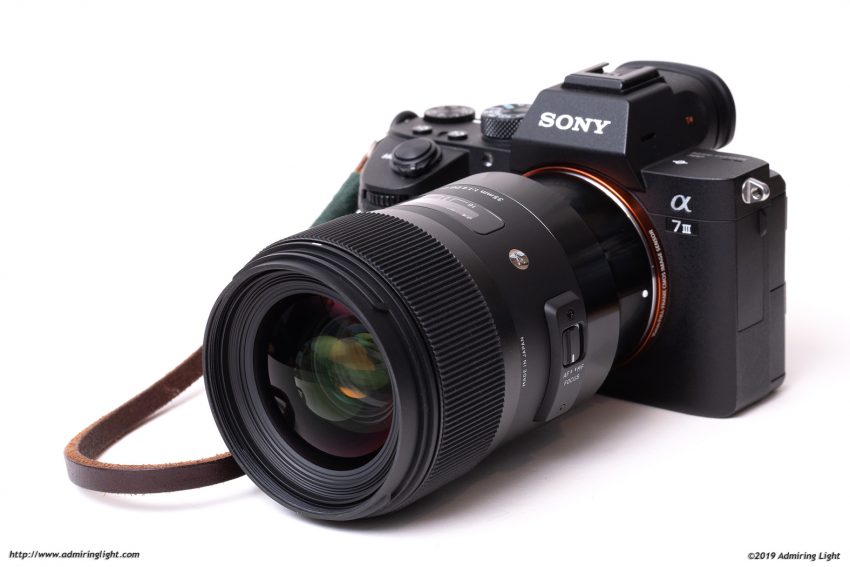 Sigma has made a name for itself over the past decade by creating lenses that are not only very competitively priced, but also excellent optically. The Sigma 35mm f/1.4 is often credited as the first of their lenses to truly live up to that standard, and seven years later, it still holds up as an excellent lens.

The Sigma 35mm f/1.4 produces images with impressive sharpness right from f/1.4.  Shots taken wide open are very sharp in the central 2/3 of the image, and still maintain good resolution to the edges, while the corners show some visible softness.  Stopping down a few stops brings the entire image into very sharp focus, even into the extreme corners.  While absolute resolution isn’t as blistering as some of the very best lenses on the market right now, it is more than enough to produce outstanding images across the frame in essentially any circumstance.  While the lens isn’t quite as biting wide open on extremely high-resolution bodies like the A7R IV as it is on the 24MP A7 III, it still shows very good resolution wide open and excellent resolution down a stop or two.

Sigma has done a great job maximizing sharpness throughout the focus range as well.  At f/1.4, images have similar levels of sharpness focused close up as it does near infinity.  A very impressive performance here.

When compared to the already excellent Sony/Zeiss 35mm f/1.4 Distagon, I found the Sigma 35mm f/1.4 to produce images that are sharper at wide apertures and similar in sharpness stopped down.

Wide aperture 35mm lenses are often used for environmental portraiture, and being able to control depth of field and tastefully blur backgrounds can be very important for this use.  Bokeh on the Sigma 35mm f/1.4 is a bit of a mixed bag, but on the whole, I find it renders out of focus areas quite nicely.

When focused at closer distances, bokeh is quite smooth, with evenly rendered specular highlights and a general lack of nervousness. Towards the edges of the frame, a bit of bright ring outlining can start to occur, which becomes more obvious the further the focus point is from the camera.

Shooting further away, bokeh can get a bit more nervous, with some harsher transitions.  It’s still a decent performance, but it loses its creamy character here.   Again, comparing to the Zeiss 35mm f/1.4, the Sigma is equally pleasing in those closer focused areas, and is a bit more rough than the Zeiss focused further away.  The lens will show some cat-eye effects towards the edges of the frame, and it can give a slightly swirly appearance to the bokeh in some circumstances.  So, as I mentioned earlier, while far from perfect, the overall effect is quite nice in most situations.

The Sigma 35mm f/1.4 shows quite nice color with a touch of a warm cast, which is typical for Sigma lenses, and I think quite pleasing when used for shooting people.  The color isn’t overly punchy, but is vibrant enough for landscape use.

The lens shows good image contrast in the focus plane right from wide open, which really helps the subject pop from the background.  This contrast profile is maintained throughout the aperture range, such that there isn’t a lot of variation in contrast with changing aperture.

The lens shows a small amount of longitudinal chromatic aberration at wide apertures, with a bit of a green fringe behind the focus point and a slight magenta fringe in front, but this only appears on fairly high contrast edges and is very well controlled for an f/1.4 prime lens.  Stopping down reduces these aberrations even further.  Lateral chromatic aberration is fairly minimal and shouldn’t be an issue at all in real world shooting.

The Sigma 35mm f/1.4 is similarly well controlled with regards to distortion.  The lens shows just a bit of barrel distortion, but it’s barely field relevant.  If shooting buildings with lots of straight lines, you might notice it, but it’s easy to correct and won’t be worth worrying about most of the time.

The Sigma 35mm shows rather strong vignetting wide open, with notable darkening of the frame edges that intrudes even into the outer thirds of the image frame.  It helps frame subjects if they are positioned near the middle 2/3 of the image frame, but you’ll want to correct it if the effect bothers you, or if your subject is near the edges of the frame. Stopping down to f/2 reduces vignetting significantly, and by f/2.8, it’s nearly gone.

One weak point with the lens is in flare control.  While it does an OK job shooting against bright light when shooting wide open, if you’re stopping down, there can be significant ghosting if the sun is near the edge of the frame, with green and multicolored ghosting.  If the sun is more centrally located as in the shot below, it still flares, but it isn’t quite as objectionable.

Overall, I was very impressed with the Sigma 35mm f/1.4.  It’s not a perfect lens, with strong vignetting wide open and a tendency to flare when stopped down, but overall it’s a lens that is sharp from f/1.4, has good (but not great) bokeh, excellent color and contrast and low chromatic aberration.  Even as lenses in this segment continue to improve, the venerable Sigma 35mm f/1.4 still proves to be an outstanding optic.