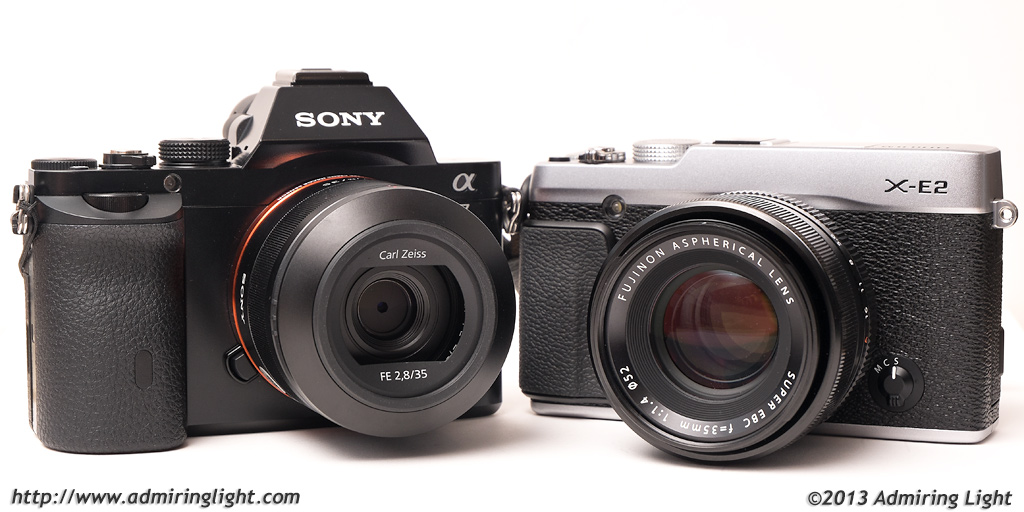 I have the Sony A7 and the FE 35mm f/2.8 in for review this week.  I’ve been enjoying shooting with the camera and will have my full reviews of both items coming up in the next week or so.  In the meantime, I’ve done a few tests here and there against Fuji’s X-E2 (read my review here).  The A7 has a significantly higher resolution sensor at 24 megapixels vs the 16 megapixels of the X-E2, and it has the sensor size advantage as well, packing a full-frame sensor into its tiny body.  However, I really wanted to see how they stacked up against each other.

Fuji has touted that its X-Trans sensors allow for ‘full frame image quality’ in an APS-C chip.  While the X-E2 obviously won’t be able to match the Sony’s resolution (with 33% fewer pixels), and, from my experience with both cameras, it can’t quite match the A7’s phenomenal dynamic range, it may very well be able to match it in noise performance, so I decided to take a look.

First, the Fuji ISO ratings are somewhat overstated.  In examining some test images, it appears that at the same shutter speed and aperture setting, the listed ISOs are roughly 1/3 stop apart.  So, to set a fair fight here, I shot the A7 with a 1/3 stop lower ISO than the Fuji and set the shutter speed and aperture of each camera to be identical.  The target was manually focused, with the A7 using a Canon FD 50mm f/1.4 and the Fuji using the XF 35mm f/1.4.  Both cameras were shot at f/4.  Since this is a flat field subject, the difference in depth of field here is irrelevant.  Both lenses were manually focused with magnified live view.  Since the X-E2 only allows up to ISO 6400 in RAW, ISOs 12,800 and 25,600 were obtained by underexposing by one and two stops, respectively, and pushing the files in RAW conversion.  The Sony was shot at the indicated ISO for all shots.

Upon first examination of the files, I saw two things.  First, the Sony does resolve more detail (as expected) at all ISOs.  Those extra pixels make a difference.  If you’re printing large, the Sony has a real advantage here.  Second, at the pure pixel level, the Fuji produces cleaner files.  However, since, if you print both images at the same output size, those extra pixels will be packed in a smaller area, I have normalized this for noise examination by reducing the A7’s files to the same size as those of the X-E2.  This should give us an idea of the comparative noise output of both cameras for the same size print.

Here are 100% crops of the normalized images, taken from the center of each image.  The A7 crops are on the left, and the X-E2 crops are on the right.   To view full size, click the image, then click the green arrow at the bottom of the screen to enlarge to 100%.

Very interesting!  While the noise profiles are a little different, there is no real difference in noise performance between the two cameras for most any setting.  The Sony may take a very small lead at ISO 12,800, and at ISO 25,600, there is less of a color shift with the Sony (though both exhibit it in shadow areas), but overall, noise levels are extremely similar between the two cameras for the same output size.

To see the Sony’s resolution advantage and the Fuji’s per-pixel noise advantage, take a look at the two images below, showing 100% crops from both cameras at ISO 200 and ISO 6400, without reducing the resolution of the Sony image. The A7 definitely captures more detail, but it also is a little grainier at this view as a trade off.

One area where Fuji’s X-Trans sensor does excel is in color noise suppression.  Below are normalized crops for the same output size at ISO 6400, but with the color noise reduction in Lightroom also set to zero.  As you can see, even when normalized, the Fuji does a little better job at controlling color noise.

So, I come away from this test impressed with both cameras, to be honest.  The fact that the Fuji X-E2 can hold its own in the noise department with a brand new, very high-end full frame sensor is frankly remarkable.  Fuji’s done a great job with their X-series cameras and it shows here.

On the flip side, the A7 produces files that just have excellent detail and great noise control, and in addition to the properties exhibited here, it has outstanding dynamic range.  Sony’s really made a great sensor here.  Stay tuned for my full review of the A7!

20 thoughts on “Sony A7 vs Fujifilm X-E2: RAW Noise Performance”