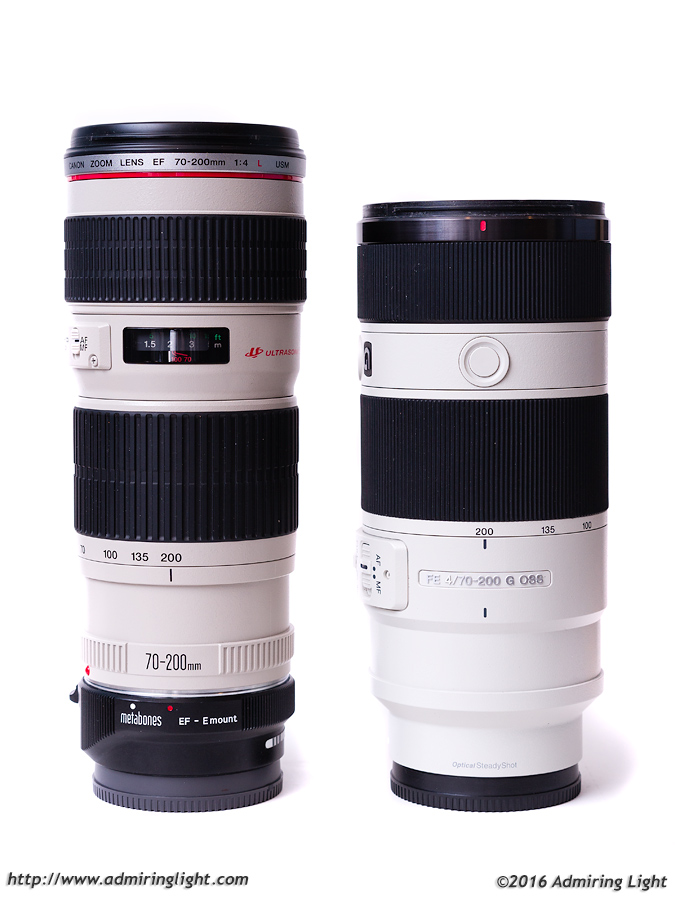 Today, I’m taking a quick look at two telephoto zoom lenses: the Sony FE 70-200mm f/4 G OSS and the Canon 70-200mm f/4L, and how they compare on the Sony A7 II.  These two lenses may seem like odd things to compare, given that one lens is a native Sony E-mount zoom, while the other is one of the older telephoto designs still in production for the Canon EF mount.  However, given the ability of the Mark II camera bodies in Sony’s A7 series to focus using PDAF even when utilizing adapted lenses, these two lenses are both viable options for those with an A7 II or A7R II who are looking for the best bang for the buck in the medium telephoto range. With the In-body image stabilization offered by these cameras, the lack of optical stabilization on the Canon also matters less than it would on bodies without internal stabilization. The Sony 70-200mm retails for $1,499, while the Canon comes in at a very reasonable $599.  If you don’t own an autofocus EF to E mount adapter, that will set you back an additional $100 to $400, depending on the model you get, though if you already have one of these adapters, it’s a sunk cost.  However, even with the adapter, you’re looking at saving a significant amount of money if you’re buying new.  Is the Sony worth the extra dough?

The EF 70-200mm f/4L is one of Canon’s older telephoto zoom lenses, having debuted in September of 1999, putting its release closer to the creation of the EF mount than to today. There’s good reason for why it has stuck around, however.  Despite its age, the optics are excellent and the USM focus motor is very fast and accurate. Combine the great optical quality with a solid build and very reasonable price, and it’s one of Canon’s most popular lenses, and is generally the ‘gateway’ lens to Canon’s pro-grade ‘L’ series for many photographers.  The 70-200mm f/4L has an optically stabilized brother that was released in 2006 that has even better optical quality, but given the $1,200 price tag, it seems to me that most who are going to spend that much money for a telephoto zoom for their Sony mirrorless system would simply go the whole way to getting the native Sony lens for a bit more, especially if you don’t already have an adapter.

The 70-200mm f/4L is roughly the same physical length as the Sony, but once you add the adapter, the whole package becomes around an inch longer.  It’s a narrow lens, with a 67mm filter thread, good haptics and good build quality, though it lacks the weather sealing of many other L series lenses.  While the 70-200mm f/4L lacks image stabilization, the Sony A7 II’s IBIS has given me around 3 stops on average with this lens, which equals what I have been able to achieve with the Sony 70-200mm as far as stabilization is concerned.

Autofocus is generally quick, and this carries over to use with the Metabones IV adapter, though it isn’t as quick on Sony bodies as it is on a Canon DSLR.  Still, in good light, focus is generally plenty fast, and even continuous AF is usable in many situations. However, if you’re going to be shooting a lot of action, it’s one of the areas where the native lens is going to make more sense most of the time.

The Sony FE 70-200mm f/4 G OSS is one of two native E-mount telephoto zooms, along with the newly announced 70-200mm f/2.8 G Master lens.  The FE 70-200mm f/4 is a solidly built lens with excellent construction, very fast and accurate autofocus and very good optical quality.  If you need features like the excellent EyeAF or you shoot a lot of action, this is the lens you should look at, regardless of the results below.  The fact that it’s a native lens means it will focus quickly on other E-Mount bodies aside from the A7 II and A7R II, unlike the Canon above. It’s a great match for a camera like the a6000 or a6300 for a bit of extra reach and for sports shooting.

Sony includes a nice lens collar with the lens and the zoom and focus rings move very smoothly. The big down side, of course, is price.

This quick test looks at the lenses at closer focusing distances. Infinity focus with both lenses is excellent, and the small differences you’ll see here are predominantly echoed at further distances.  If I have a chance to do an infinity test, I will try to do so, but given my schedule for the week, I can’t guarantee that.

I placed my Frank Lloyd Wright book, which is in a flat box to provide a very flat subject, at a distance between 1.7 and 2m, (I moved the target back as the focal length increased to provide detail in the corners). I placed a crystal decanter in the background to help evaluate bokeh.

Shots were taken on a sturdy tripod with 2s self timer and stabilization off.  In setting up the test, one thing became very clearly apparent between the two lenses.  Both lenses are internally zooming and internally focusing.  Internal focus can often cause a lens to actually shorten its focal length as the lens focuses closer, and this is extremely apparent with the Sony FE 70-200mm f/4.  While both lenses show similar fields of view over their ranges when focused at infinity, when focused closer than 5m or so, the Sony drastically shortens its focal length in comparison to the Canon. In fact, at this 2m distance, when the Sony is at 200mm, the Canon only needs to be set to 163mm to match the framing exactly between the two lenses.  So, for closer subjects, you’re giving up around 35-40mm in reach in comparison to the Canon lens.

Anyway, above shows the full scene at 200mm.  The setup was nearly identical except for framing for the other tested focal lengths.

Below are 100% crops from both the center and extreme lower right corner of the test images at 70mm.  The Canon zoom was set to 70mm, while the Sony needed to be zoomed to 79mm to match the framing of the wide end of the Canon at this focus distance.  Click on the image below to open it, then zoom in to view at 100%.

In the middle of the zoom range, things switch around a bit.  For this framing, the Sony was at 137mm, while the Canon only needed 118mm to generally match the framing of the Sony. Again, click to open and view at 100%.

Now let’s look at the long end of the zoom.  As mentioned earlier, the Sony when set to 200mm is a fair bit shorter than the Canon at this focal range.  The Canon was set to 163mm to match the framing of the Sony at the long end. Click the image below to view 100% crops and zoom to view full size.

At the long end of the zoom, both lenses put in similar performances at f/4.  The Sony might be a touch sharper in the center (though it’s very close) while the Canon has a slight edge in the corners.  Stopping down to f/5.6 shows the Sony to be a bit sharper in the center, but the Canon is notably sharper in the corners. At f/8, both lenses are similarly sharp in the center, with the Canon still showing a notable edge in corner sharpness.  While the Sony lags a bit at 200mm for cross frame sharpness, the fact is that it’s still sharp over the majority of the frame at this focal length, making it still an excellent choice for most shooting situations.

Below shows 100% crops from the crystal decanter in the background at the focal lengths used for the 70mm test and the 200mm test.  Both lenses produce good bokeh. to my eye, the Canon is just a bit smoother throughout.  The difference is subtle at f/4, but is more prominent at smaller apertures.

Both lenses show a very nice performance, but I was a bit surprised to see the Canon show up the Sony in most areas (if only slightly), despite being a design 15 years older.  The lens is also notably cheaper, and is still cheaper even in purchasing the smart adapter to go with it.  For that bargain price, you get a bit sharper cross frame performance at 70mm and 200mm, while the Sony is a bit better at 135mm.  The Canon also shows slightly smoother bokeh.

The price difference is considerable and the optical differences are fairly minimal, but this doesn’t mean that the Canon is a slam dunk.  The Sony focuses a bit faster on the E-mount bodies, can utilize great features like Eye AF, and is a bit shorter. It also will work much better with older E-mount bodies that don’t have PDAF with adapted lenses, and it has optical stabilization for use with non A7 II-series cameras. However, if you don’t need extra features for your daily shooting, the Canon is a great bargain.