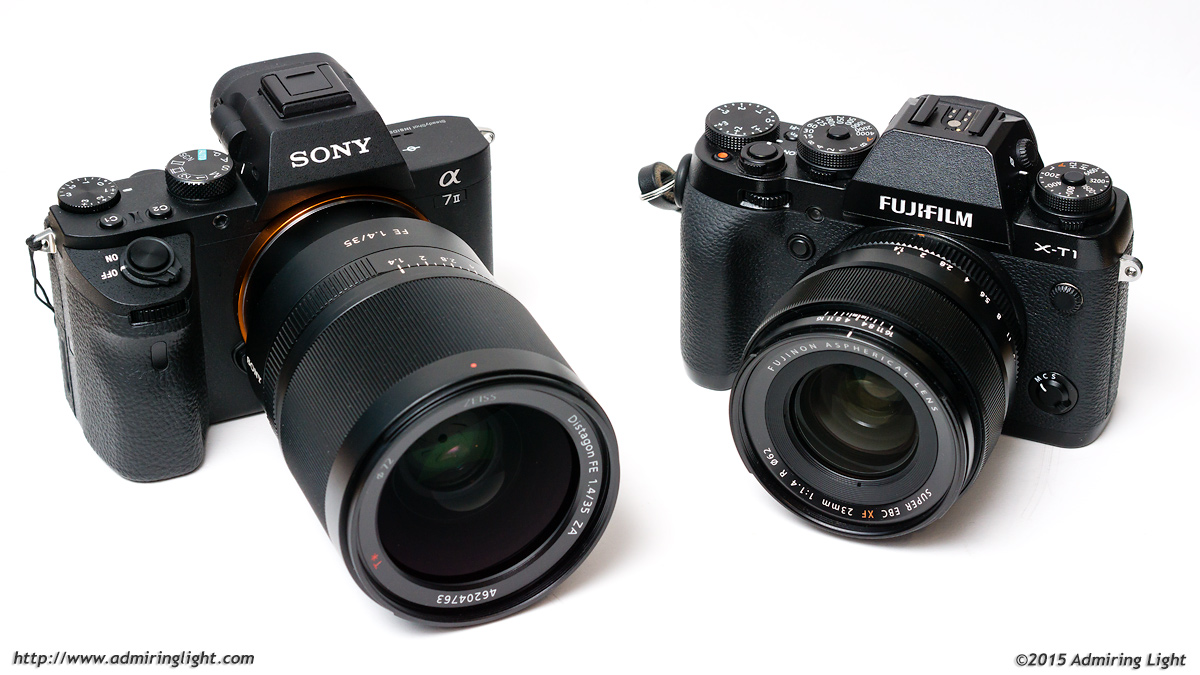 Ok, so this is one of those comparisons that really isn’t particularly fair.  You’ve got a $1,600 Zeiss prime up against a $900 Fuji prime, and the test bed cameras aren’t the same resolution.  There are lots of problems with testing like this, but I’m going to do it anyway.  Why?  It’s fun!  Today I’m comparing the Sony Zeiss FE 35mm f/1.4 (reviewed here), mounted on the Sony A7 II and the Fujinon XF 23mm f/1.4 (reviewed here), mounted on the Fuji X-T1.  Both of these lenses have approximately the same field of view, and they both have the same fast f/1.4 maximum aperture.  They are also both highly regarded lenses for their respective systems, so let’s see how they stack up.  And please, please take these tests with a grain of salt.  This is a fun comparison, and both of these lenses are really quite excellent.

From the picture and specifications above, you can see that the Zeiss 35mm f/1.4 is roughly double the, well, everything, of the Fuji 23mm f/1.4.  It’s nearly twice as long, over twice as heavy and almost twice as expensive.  It’s a monster sized lens, especially considering it’s a mirrorless optic.  The Fuji is considerably more compact and easy to carry.  It’s worth pointing out that the two lenses share the same maximum aperture, but due to the focal length differences, the Sony should provide around 1 stop shallower depth of field at the same aperture, allowing for greater subject separation.  Some would say I should be comparing the Fuji to the Zeiss Loxia 35mm f/2.0 instead.  It’s a valid point, but again…this is for fun: the two flagship lenses at this angle of view for each system.

This is a simple test, taken at a focus distance of approximately 2 meters.  This is a general focus distance that is good for environmental portraiture and other similar shots.  The lenses were tripod mounted and the blocks in the crops you’ll see were set at the center and the very left edge of the frame.  The full frame examined can be seen below (this is the Sony 35mm shot at f/2.0):

I took images focused on the center set of blocks, at full stop apertures, starting at f/1.4, and crops are presented below.  Now, let’s talk about the difference in test bed resolution.  The A7 II has a 24 megapixel full frame sensor, while the Fuji X-T1 has a 16 megapixel APS-C sensor.  I could compare full resolution between the two, and you’d see a pretty big difference.  Let me clue you in: The Sony combo shows more detail.  In some cases, a LOT more detail.  There’s just more detail that can be captured.  On one hand, this is certainly a big advantage to the Sony system, and we shouldn’t discount it.  On the other hand, it’s not really helpful to compare lenses when the sensors behind those lenses are of differing resolutions.

So, for the 100% crop comparisons below, I have resized the Sony images to the same pixel dimensions as the Fuji files.  This should still give a slight advantage to the Sony, but makes comparing the two a bit easier.  Don’t worry…I’ll post a few full size crops at the end.

So, let’s look at the center.  Click on the image, which will bring you to a full size image in a new window.  You may need to zoom in after the image loads to see the images at full size.

A few things can be seen here.  First, at f/1.4, the Sony is clearly sharper, even when reduced to 16 megapixels.  There is incredible contrast and clarity to the image straight from f/1.4.  If you compare the f/2.0 Sony shot to the f/1.4 Fuji shot, which would provide comparable depth of field, the difference is perhaps even greater. Looking at the top edges of the blocks, you can see that the Fuji controls CA slightly better, as a light-colored fringe can be seen along the top edge of the block at f/1.4. Stopping down improves the Fuji quickly, such that by f/2.0, the two are quite close, and by f/4, it’s hard to really pick between them.  The Zeiss still may hold a slight edge here, but it’s very close indeed.  I only show to f/4 on the center crops because neither lens improves upon stopping down further.

Here things are a fair bit more lopsided.  The FE 35mm puts in an absolutely stunning performance here, with still extremely sharp images even right at the frame edge from f/1.4.  The Fuji does OK here, but simply can’t keep up.  Stopping down helps equalize things, and by f/2.8 both lenses are producing very strong resolution.  By f/5.6, the Zeiss still has a very slim edge, but it’s very close at these smaller apertures.

It’s clear that both lenses are very good, but the Zeiss is simply in a league of its own.  I’ve never seen a 35mm lens (or equivalent angle of view) with such a wide aperture perform this strongly.  it’s quite remarkable.  To get an idea of the full advantage this lens on the higher resolution sensor gives you, take a look at the f/1.4 edge crops at full size:

With a fast moderate wide-angle, the quality of out of focus blur is also of great importance.  While the full frame lens will allow for about one stop shallower depth of field due to the longer focal length, both lenses are very capable of providing for excellent subject isolation.  Below are crops showing how the background is rendered in this scene:

You can clearly see the depth of field differences here, but if you want to compare for similar depth of field, then simply look at crops down diagonally (f/1.4 on Fuji, f/2 on Sony and so on).  Both lenses are fine here, but the FE is once again a cut above.  It’s really quite remarkable that the lens designers were able to make this lens as sharp as it is while still providing for excellent background blur.

I also took one other scene, though crops don’t make much sense here, and it led me to discover something.  Focus breathing is a phenomenon that many lenses experience, and often it is due to a lens shortening actual focal length the closer one focuses.  Close up, I was able to see that the FE 35mm exhibits rather pronounced focus breathing, except it lengthens the focal length.  I’d estimate that the FE 35mm is actually closer to a 42mm lens at close focus.

The shots below I originally took tripod mounted again, but the FE shot was considerably tighter in framing and also produced blur that was more pronounced than the usual 1 stop difference.  I retook the Fuji shot at the lens’ minimum focus distance (which is the same as the Sony’s), but it still didn’t match.  This can actually be seen in the magnification factors.  The Fuji at MFD is 0.1x (0.15x framing in full frame terms), while the Sony is 0.18x at MFD.  In any case, here’s what you can expect when going for maximum subject isolation with these lenses:

I said up front that this wasn’t really a fair test, and it really isn’t.  The Zeiss was tested with a higher resolution body, and the lens itself is nearly double the cost.  However, despite the resolution difference, it’s easy to see that the FE 35mm f/1.4 is exceptional.  It takes an extremely good Fuji 23mm f/1.4 and makes it look mediocre in comparison.  Zeiss has done something rather incredible with the lens.

Of course, this performance comes at a cost.  Two costs, really. The first, of course, is actual cost.  The Zeiss will run you an extra $700 more than the Fuji.  The second cost is in size, with the lens being nearly twice as long and more than twice as heavy.  If you’re willing to carry the weight, it’s a lens that may very well be worth the cash.  However, size can really make a difference, both in your comfort shooting and even the way your subjects react to the camera.  Pick what’s right for you.  The FE 35mm f/1.4 is an incredible optic, though I personally would rather have something like the Fuji 23 to carry on a daily basis.  The Zeiss Loxia 35mm f/2.0 is also worth a strong look for those in the Sony camp who want a fairly fast lens but don’t want the bulk.  But I have to give credit where credit is due: Bravo Sony and Zeiss.