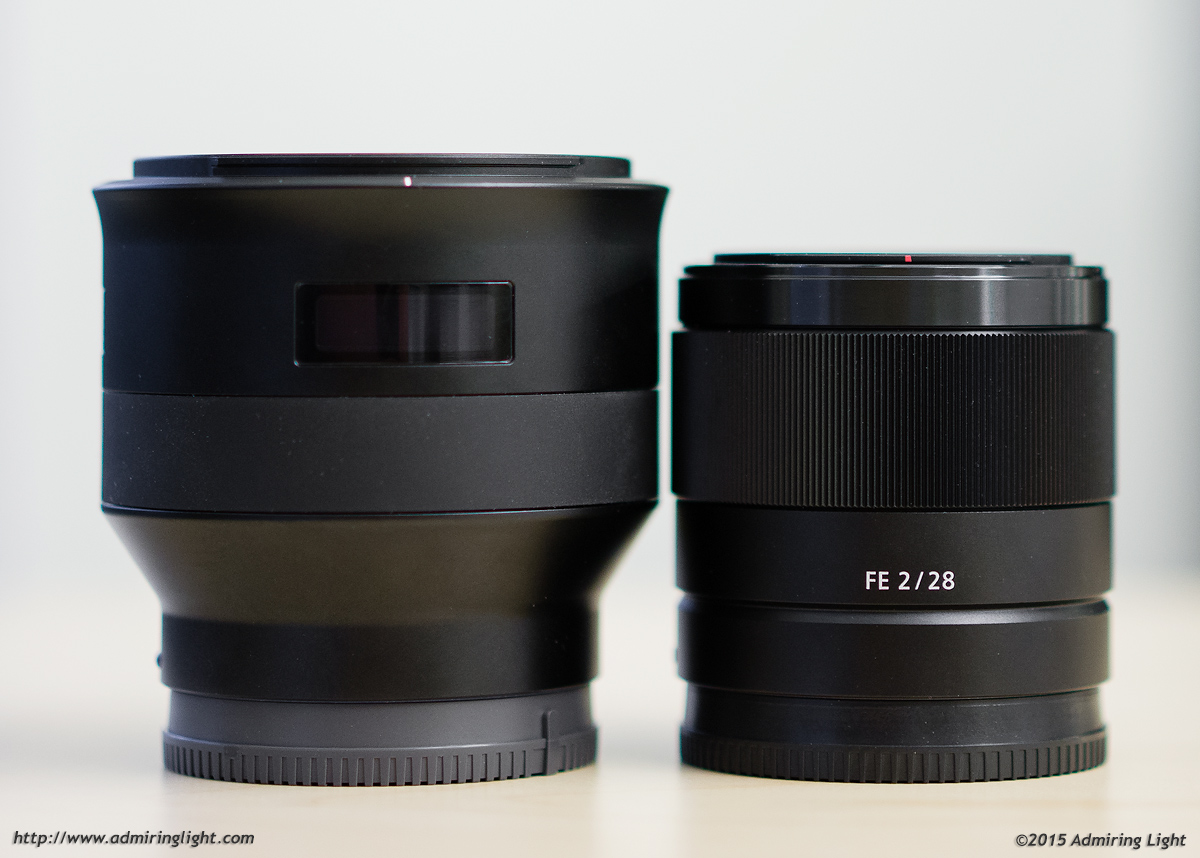 Today I’m looking at a quick test of two wide-angle lenses for the Sony full-frame E-Mount: the Zeiss Batis 25mm f/2 Distagon and the Sony FE 28mm f/2.  There’s a $900 price gap between the two lenses, which share a somewhat similar field of view and the same maximum aperture.  How do they compare?  Let’s find out.

The two lenses share a max aperture and are both wide-angle lenses, though beyond there are quite a few differences.  First of all, the Batis 25mm has a wider field of view.  If you prefer one focal length over the other, it’s probably going to help sway your opinion one way or the other when considering between these two lenses.  Second, the Batis is a notably larger lens, and finally there’s the rather large price difference.

The Batis 25mm f/2 is Zeiss’ wide-angle offering in their autofocus FE line.  I reviewed the Batis 25mm here and found it to be an excellent lens.  It’s got fast autofocus, excellent optical quality and that lovely Zeiss look.

The Sony FE 28mm f/2 is a notably smaller lens, and is Sony’s most affordable FE prime lens. I reviewed it here and found it to be good optically and a very nice value given the fast aperture and relatively strong optical performance.

Let’s look at the overall specs of the lenses:

The Sony is physically much smaller and notably lighter, but the biggest difference is in price.  The Batis 25mm is nearly triple the cost of the FE 28mm.  I knew from using both lenses that the Batis has the edge in optical quality…but by how much?  Is it worth the major price difference?

This is a quick test..I had meant to pit these two lenses in a variety of scenes at near and far focus distances, but unfortunately, I came down with a nasty stomach bug towards the end of my time with the Batis 25mm, and so I lost two days of shooting.  The last day I had the lens, I had just enough time to set up this one test to pit the two lenses against each other.

The subject, this ivy colored wall, was approximately 5 feet away (for the Batis 25mm) shots. The camera was tripod mounted and the shutter was tripped with a 2 second delay to avoid vibration from the shutter press.  After recording the Batis shots, I moved the camera back slightly to frame the same area in the foreground with the 28mm lens.

To compare sharpness, I took crops from the center and the lower right corner of the frame.  The crops presented are without the digital distortion correction applied.  Both the Batis 25mm and the Sony 28mm have visible barrel distortion, though the 28mm has quite a bit more.  I’ll show a quick comparison of the f/8 crops with distortion correction applied for both lenses to show how edge sharpness is affected.

Below are 100% crops for the images. Click on the image to open it full size in a new tab, and then you can magnify to 100% in that tab.

Looking closely at the crops a few things are apparent.  First – the Batis 25mm is clearly superior at wide apertures, across the frame.  At f/2, the Batis is slightly sharper in the center, though the Sony also does quite well here.  The Sony 28mm catches up a bit by f/2.8, and beyond that it’s very hard to pick between them.  In the corner, it’s no contest.  While the Batis isn’t tack sharp here, it’s still showing some detail, while the Sony 28mm is just mush in the corners at f/2.  The corners lag for the Sony until f/5.6, when suddenly it passes the Batis in the corner. The f/5.6 Batis corner crop is a bit suspect, as it’s softer than it is at f/4.  It’s possible there’s an effect of wind here, though the center crop looks to be unaffected, so I’m not sure.  In any case, at f/8, the Sony is still very slightly sharper, though both show good resolution here.

Overall, I’d give the edge to the Batis here, as it has very good performance across the frame at all apertures.  The Sony is quite good centrally at wide apertures, but lags at the corners, and though not presented here, it also lags at the edges compared to the Batis below f/4.  Stopped down, both perform quite well, with the Sony catching up nicely.

While neither lens will provide huge subject separation at this focus distance, there is still plenty to see, and this distance tends to pose the biggest challenge in blur rendering.  Closer up, both lenses are quite smooth.  At this distance, they gain some nervousness, so let’s take a look.  Again, click to open full size.

At f/2, the Sony FE 28mm f/2 actually has the nicer rendering.  Both lenses show a touch of longitudinal CA and bokeh fringing, but it’s worse and more well-defined with the Batis 25mm.  The Batis also has higher contrast at f/2 in the background, leading to a bit of chunkiness.  Stopping down, the Batis has a bit smoother bokeh at f/4, though neither blur the image much at this aperture.  At f/8, the FE 28mm shows a bit more blur, and with many details rendered at this smaller aperture, the extra blur helps make things look a bit smoother.  Overall, I’d give the FE 28mm a slight edge in bokeh quality.

Overall, I feel the Batis 25mm is the better performer.  It’s sharper over a much larger aperture range across the frame, and while the bokeh is a bit rougher at f/2, the better sharpness and distortion control make it a winner.  I also prefer the slightly wider field of view that a 25mm lens brings.  However, when it comes to the big question, it’s much harder to answer: Is the Batis worth almost $900 more? For my needs: No. I bought the FE 28mm for myself, while I will not be purchasing the Batis.  However, if you’re a prime shooter and prefer the wider 25mm field of view, it may very well be worth the cost for the wider view and better overall performance.  As with most things photographic: the choice is yours.