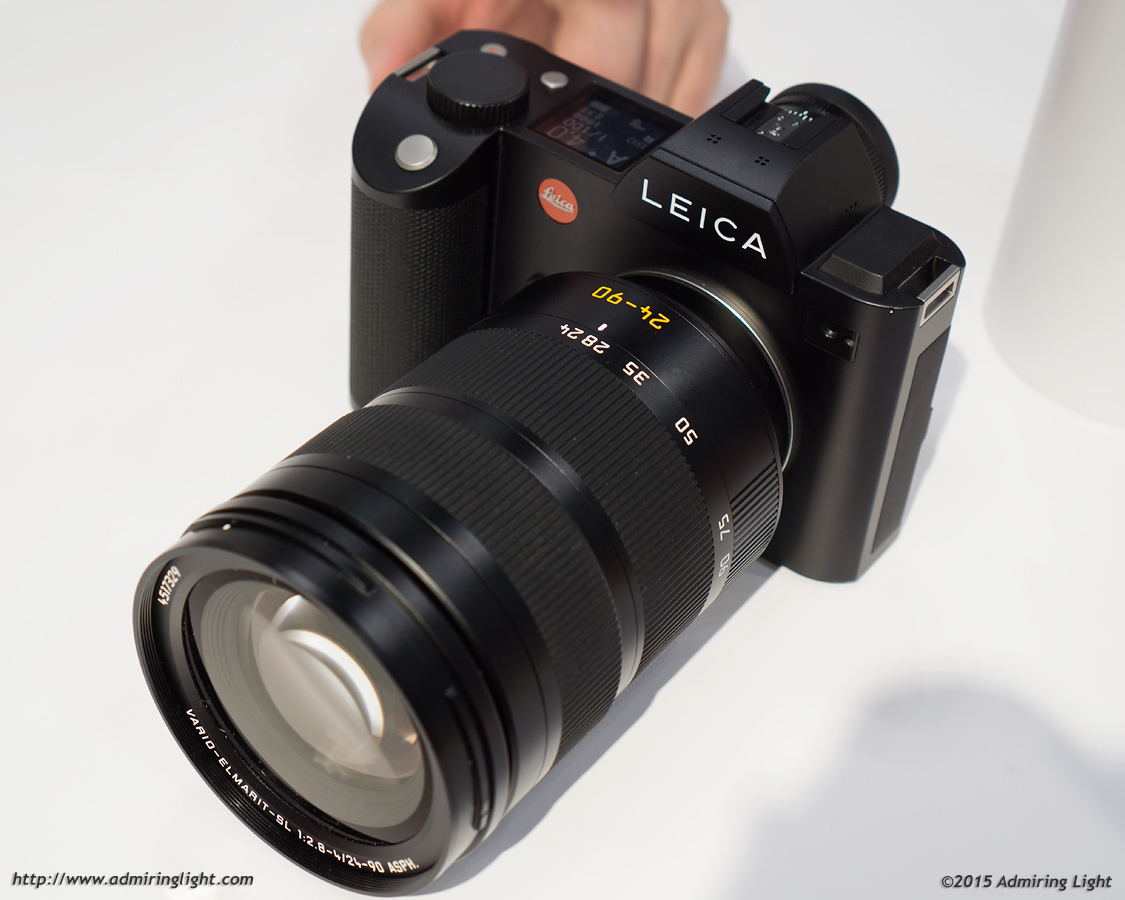 Continuing my coverage from day 1 of PhotoPlus Expo in New York comes the news from Leica.

The newest mirrorless system is the brand new Leica SL, which was announced just two days ago.  The SL bucks the trend of ‘small mirrorless’ and instead simply treats it as any other high-end imaging system with regards to size, while it simply doesn’t happen to have a mirror.

The control layout of the SL is reminiscent of the Leica medium format cameras, which lets you know exactly where Leica feels the SL falls with regards to its target user.  It is a large body, and feels like a slightly skinnier full-frame DSLR in size and weight.  The grip is non-descript, but due to the fact that my full hand can fit on it, and the ample depth made holding onto the SL easier than I first imagined upon seeing the camera.  The rear controls are predominantly touch and programmable button based, which can make finding features and operating the camera a bit awkward, at least while I was unaccustomed to it.  The biggest gripe I had with the controls was the distance between them, however.  Things are far apart on the SL, and quick access to many items was somewhat difficult due to spacing.  I also thought exposure compensation, at least at default settings, was much too difficult to access (a long press on the function button on top, then movement with the touch screen or dial.)

The SL features a large ultra high-resolution EVF. It did look quite good, and I guess the best compliment I can find is to say that it’s not unlike looking through an optical finder.  The view was slightly dim, but I’m sure there’s a setting to adjust brightness.  However, clarity is outstanding and the response looked very natural.

There were three lenses announced with the SL, though only two were on display, and only one was final.  The first lens available is a fast standard zoom, the 24-90mm f/2.8-4.  The lens is also huge, and while the combination of lens and body are large and rather heavy, they blend well together and feel good in the hand.  The lens is of typical Leica build quality with smooth damped zoom and focus rings.

At first blush, the image quality appears to be outstanding, especially with regards to the 24-90 quality.  Images are extremely sharp, even at f/4, with nice bokeh and that crisp Leica look to the images.  The limited impression from the sensor is that it’s quite good.  Dynamic range is really hard to judge in this area, but it seemed to do nicely, though shadow areas tend to show noise somewhat quickly when pushed.  The noise performance, at least to ISO 3200, which was as high as I went, looked very good.  There’s a non-negligible amount of noise at that ISO, but it’s very fine-grained and looks quite nice.  Full size image samples are available at the end of this page.

The other lens announced and available for viewing is the utterly enormous 90-280mm f/2.8-4, which looks almost silly big on the camera.  It’s not quite as heavy as it looks, and given the large aperture for the range is not out of line.  Image quality from this lens also looked quite good, though Leica was careful to point out that this is a prototype version of the lens, and that the final image quality will be even better.

Overall, the system is a bit unwieldy for me, and the price is exorbitant. An SL body with the 24-90mm lens will cost you nearly $13,000 US, but it does look like it will deliver excellent quality.

Below I’ve included several full size image samples from the Leica SL with both lenses. Click on the image to enlarge, then click on the green arrow at the bottom to view full size.  All images are converted from DNG using Lightroom CC.

Now let’s move on to the intriguing Leica Q