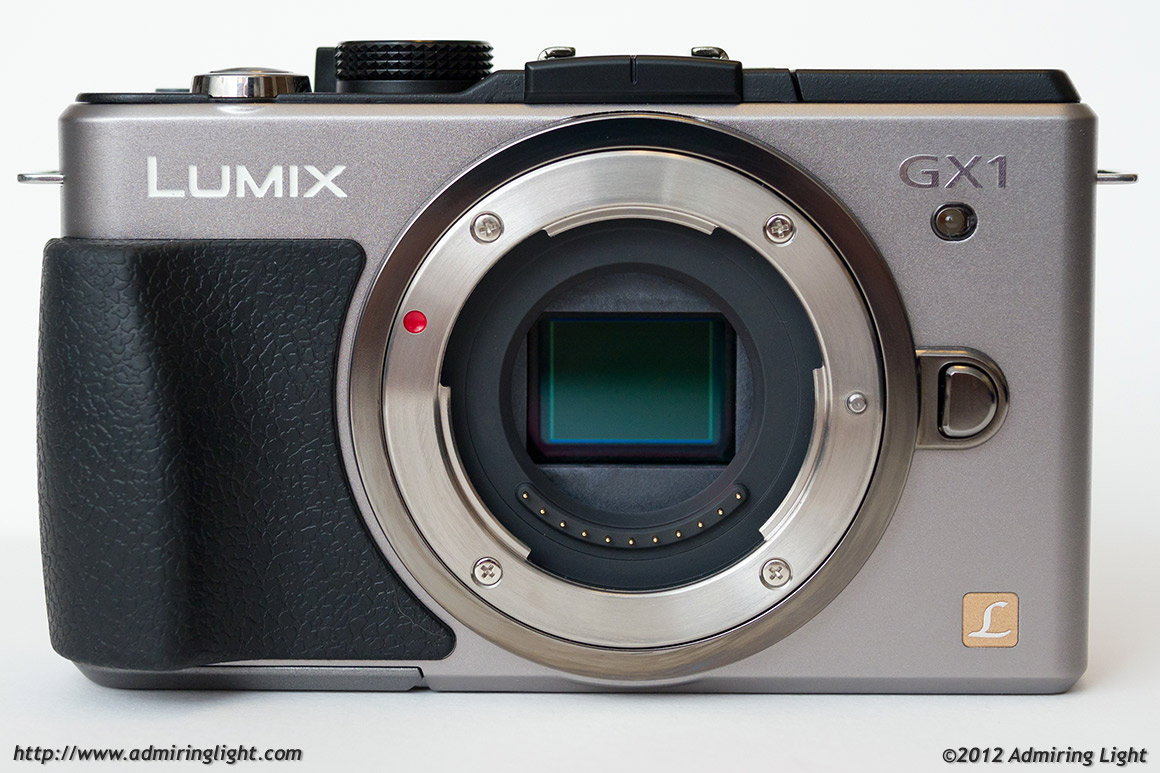 Photographers who use the Micro 4/3 system of Compact System Cameras have long been awaiting a true upgrade to Panasonic’s original rangefinder style interchangeable lens mirrorless camera, the GF1.  The GF2 and GF3 saw a repositioning of the the GF series into a more consumer oriented device, eschewing many external controls found on the GF1 in the name of simplification, presumably to entice point and shoot users to upgrade to the GF cameras.  While the GF1 is older, it is in many respects superior to the subsequent GF series cameras due to its ergonomics, multiple dials and buttons for direct access to often used controls, and flash hotshoe.  (The GF2 has a hotshoe, but this was discarded on the GF3).

Enter the new DMC-GX1. Panasonic has responded to critics of the later GF line by finally giving photographers a true successor to the GF1.  The GX1 has an updated, 16 megapixel Live MOS sensor, shoots 4.2 frames per second in burst mode, incorporates a touch screen and retains all the external controls of the GF1, while adding even more quick access functionality.  Additionally, the body is slightly smaller, yet easier to handle due to the contoured rubber grip.  I’ll take a look at how this camera performs, its quirks, its successes and failures.

The GX1 is a compact, rangefinder style body that is clad in an aluminum skin that is lightweight, yet sturdy.  With a pancake lens like the Panasonic 14mm or 20mm, or the Olympus 17mm, it is small enough to fit in a jacket pocket.   It is available in both silver and black painted finishes;  I happen to have the silver version.  The buttons on the back are metal, which is different from the G and GH series bodies which have plastic buttons.  The metal buttons give a very positive and satisfying click when pressed.  The top plate is matte plastic with good quality fit and finish.  As a nice touch, “Lumix” is engraved in the metal, and “GX1″ is raised.  The biggest change to the GX1 from the GF series is the addition of a chunky contoured rubber grip.  The grip is perfectly contoured to fit your hand, and it even works well when slipping your middle finger along it when carrying it around (which is more comfortable than carrying in the shooting position).

The rear of the camera is dominated by the 3” touch sensitive LCD screen.  Panasonic has provided a small, yet comfortable thumb rest to support the camera.  I find that the shape of the grip and thumb rest forces your hand to a very specific grip for shooting.  Luckily, this grip is comfortable and allows for easy access to camera controls. 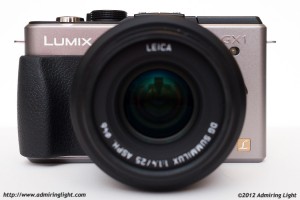 Ergonomically, Panasonic did a very good job for such a small camera.  While the grip isn’t as comfortable as the GH2 due to the size, it’s very good considering the size of the body.  Buttons are well placed and those that would be prone to accidental pressing with the heel of your palm are recessed, yet still easily accessed when needed.  There are two programmable function buttons, the typical four way buttons that control direction as well as ISO, WB, Drive mode and AF.  There is also a dedicated display button, a Quick menu button for changing other parameters and an AF/MF button for quick switching between focus modes.

On top, there is the mode dial, which contains the usual P, A, S, M shooting modes, plus two customizable settings, a scene mode and creative art filters.  The rest of the top plate contains the on/off switch, the metal shutter button, a dedicated movie shutter button and the iA button for toggling the intelligent Auto mode on and off. 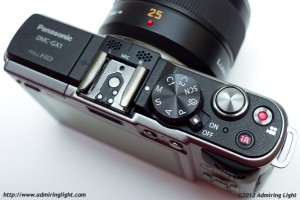 The click thumb wheel on the back operates the same as on all other recent Panasonic G series cameras, though it’s a little smaller than on the GH2/GH1/G1, etc.  The first day I used the camera,  it was a bit stiff and finicky, but has been broken in now and feels good, though still not as nice as the GH2’s, presumably due to size.  Clicking the wheel transitions between changeable values when setting parameters (aperture and exposure compensation in aperture priority, aperture and shutter speed in manual, etc), or activates the zooming for focus assist if using an adapted manual focus lens, which makes using adapted lenses a breeze.  Because of Micro 4/3 short register distance, nearly every SLR and rangefinder lens can be adapted for use on the GX1.  I use a variety of adapted lenses on my cameras, so this is a very welcome part of the Panasonic user interface.

There is no built in viewfinder on the GX1, so the rear LCD is used for both settings and composing the image.  Panasonic does offer a brand new add on electronic viewfinder (EVF) which gives a 1.4x magnification ratio (equivalent to a 0.7x full frame viewfinder) with 1.44 million dots in sequential field display.  The new viewfinder, DMW-LVF2, is only compatible with the GX1 as of this writing.  The GF series cameras must use the earlier LVF1, due to a change in accessory ports made for the GX1.

Overall, the camera feels good in hand and all major controls are quickly accessed.  The only negative is directly related to size.  With most Micro 4/3 lenses, the grip is sure and there is plenty of room for your fingers.  On some wider lenses, such as the Leica 25mm f/1.4, the fingers can be a bit cramped.  Also, if you are using a large lens, such as the Panasonic 100-300mm zoom, or an adapted telephoto, such as the Canon FD 200mm f/2.8 pictured above, the size can be a bit too small.  I much prefer the grip of the G or GH series cameras for long lens work.  It is a minor issue, however, since the weight when using such lenses is generally supported by the left hand. 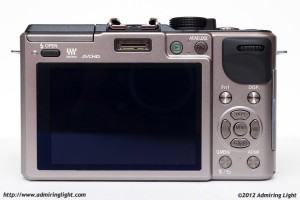 Like all recent Panasonic bodies, the 3″ LCD is a touch panel as well, and it works very well.  The LCD is a 460k resolution panel.  While I would prefer to see a higher resolution screen in 2012, the screen does display colors accurately and is crisp enough for good composition and is passable for manual focusing, though using the camera’s ability to zoom in when manually focusing is a great aid when using the LCD.

Panasonic has made some changes to the touch screen operation and the quick menu system that are for the better.  Like on other touch G series cameras, most major functions that have dedicated controls can also be changed via touch screen (but aren’t required to be).  The screen is a resistive touch panel, though it looks somewhat different than the screen used in the GH2, G2 and G3.  It is glossier, and at first glance appears to be a capacitive screen.  While capacitive touch panels are more responsive, they can’t be operated with gloves on, so I am glad they stuck with resistive for this LCD.  You can set focus point and focus point size just by tapping, which is is fast and intuitive.  There is a new touch activated pull out drawer which has two more customizable function buttons activated via touch, as well as the touch shutter control.  It doesn’t get in the way and is a nice way to get to other settings quickly.    This is a nice improvement over the touch interface in the GH2.

One nice addition to the GX1 is an electronic level.  This can be brought up via the Display button, or a shortcut assigned to one of the four customizable buttons.  It is easy to use and doesn’t disrupt composition as well.  My favorite part of the electronic level is that this addition has FINALLY brought automatic image rotation to Panasonic bodies with all lenses.  Prior to the GX1, Panasonic bodies only rotated verticals automatically when using an OIS lens.

I’m not going to discuss menus here too much.  If you’ve used any recent Panasonic Micro 4/3 body, you will instantly be at home with the menu system, as it is largely unchanged.  The only new items are those that are specific to the GX1, which are few and far between.  Overall, I find the menus to be relatively logically ordered, though they could still use some cleanup, as many of the sections are several pages long.  Panasonic has improved somewhat in the naming of its function items, but some functions are still rather ambiguous, and require a peek at the manual to figure out what they do the first time.