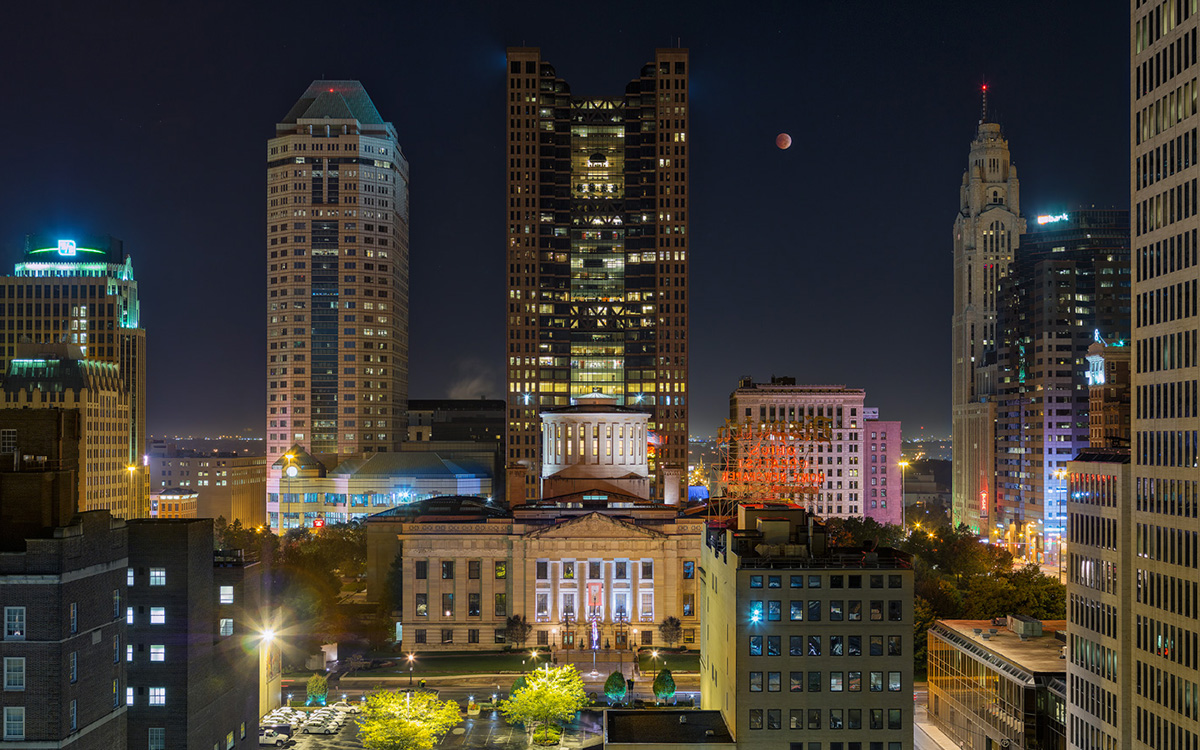 One of the keys of successful outdoor photography is planning.  While many great shots have been made simply by ending up in a good spot by chance, and then having a great composition catch your eye, for many types of shoots, especially with landscapes, prior planning can make the difference between coming back with a good shot, and coming back with nothing.

Shooting a scene with a lunar eclipse in it is one of those things that really requires prior planning to make the best of the situation.  Today we had a total lunar eclipse over a large portion of the earth.  It so happens that in the Eastern United States, the eclipse was to happen near moonset.  A few days prior to the eclipse I saw that it would occur just after 5 AM, with total eclipse beginning around 6:25.  I pulled out the Photographer’s Ephemeris (a fantastic app, which is available as a web app, and as standalone apps that you can get here on iOS and here for Android), and began looking at potential angles.  If you don’t know about The Photographer’s Ephemeris (TPE), it allows you to do a multitude of research on conditions at specific locations and times.  The most useful for me is the ability to pinpoint a location, then see how the sun and moon will move across the sky for a specific time and date.  I plugged in today’s date, and played with the time slider around the time of the eclipse.  It turned out that the moon would be aligned with one of the major roadways in my city (Columbus, Ohio), just before the total eclipse, and would be at approximately 18 degrees of elevation around that time.  Knowing the three prominent skyscrapers in the city are approximately 500 feet tall, I did some quick trigonometry to figure out how far from the buildings I’d need to be to have the moon situated below the peak of the buildings but still somewhat high in the frame.

This gave me an intersection in the city from which to shoot, and allowed me to contemplate compositions knowing where the moon would be in advance. I went downtown this morning and looked to park near that spot, so I’d be the right distance back to get the framing I was after.  There was a public garage right near the intersection I had planned in advance, and I parked my car.  As luck would have it, the garage itself turned out to have a better vantage point than my original street level location, though it all came about because of the initial planning to determine the proper distance and knowing the framing of the moon between the buildings.  After taking a few shots from my original location, I went back to the garage, taking the elevator all the way to the roof, 11 stories up, for an excellent city vantage point, with the moon placed right between two of the larger skyscrapers in the city.  Good planning and advance timing let me get the shot, and no time was wasted walking up and down the blocks hoping for the right angle or the right distance to frame the moon vertically.

Of course, I also took a handful of shots of the moon itself, close up, but frankly those shots are ones that millions of people took today.

2 thoughts on “Planning the Eclipse Shoot”