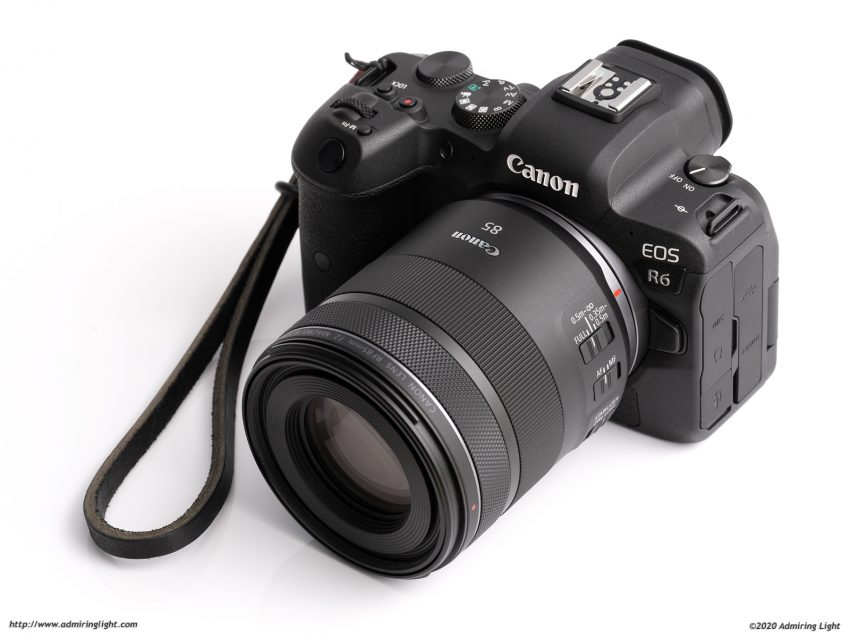 In the Canon EF system, the EF 85mm f/1.8 is one of the oldest lenses in the system, and hasn’t been updated at any time since its original release way back in 1992. Part of that is because it was a pretty good lens, focused fast, and was affordable. With the RF mount, there’s finally an opportunity to update the more affordable 85mm lens in Canon’s lineup, and I think overall they’ve done an excellent job.

The RF 85mm f/2 Macro IS STM is a very sharp lens. Images are tack sharp across about 90% of the frame right from f/2, with just a bit of softening at the very edges. Stop down to f/2.8 or f/4, and the edges and corners sharpen up nicely to provide very good cross frame sharpness.

Below is a close portrait shot at f/2. Click here for a 100% crop of my eye. (I used the Canon remote app with eye detection). You can see the lens shows excellent resolution wide open.

As you’d expect in a lens with the Macro moniker, the 85mm f/2 also maintains very good sharpness at close focus distances.At the minimum focus distance of 0.35m, or 1:2 magnification, sharpness is much the same as at more normal focus distances, with good central image sharpness from wide open, with a bit softer edges and soft corners, but stopping down a bit brings the image into sharp focus from corner to corner.

Overall, sharpness on the 85mm f/2 is a fairly substantial step up from the older EF 85mm f/1.8, when shot at wide apertures.

As a fast 85mm prime lens is often used for portraiture, bokeh is a rather important quality in a lens such as this, and the 85mm f/2 puts in a respectable performance here. For portrait work, bokeh is rather good, with a generally smooth appearance, though contrast can sometimes be a little high. Like the RF 35mm, specular highlights become elliptical towards the edges, and are smaller in size than they are in the center of the image frame. These factors can sometimes combine to add a small amount of nervousness to the image when dealing with complex backgrounds.

Still, there’s also nothing objectionable about the bokeh either. Highlights are evenly lit, with no obvious outlining. The overall rendering isn’t as creamy as the RF 85mm f/1.2L, but it’s still a solid showing, and I’m pleased with the bokeh of the lens.

When shooting closer up, the bokeh is very pleasing, with a smooth, creamy appearance to background blur, with nice, even specular highlights. Just the slightest hint of a brighter edge to the highlights can sometimes be visible, but I still really like the overall look. There is a touch of a double edge in the just out of focus areas of the fence in the shot below.

The 85mm f/2 Macro shows very nice color response, with a neutral color cast and good color saturation, even wide open. Contrast is excellent straight from f/2, even at minimum focus distance, and allows for punchy images at any aperture.

One of the weaknesses of the older EF 85mm f/1.8 lens was a fair bit of longitudinal chromatic aberration and purple fringing in high contrast situations at wide apertures. The new RF 85mm f/2 on the other hand shows a very good performance with regards to chromatic aberration. Lateral CA is negligible, with essentially none visible in real world shooting. Longitudinal CA is also relatively well controlled, with just a slight greenish yellow cast behind the focus point, and a bluish cast in front of the focus point. I did not experience purple fringing at all with the lens in my testing.

The RF 85mm f/2 shows moderate pincushion distortion when uncorrected, a fairly common thing nowadays, as manufacturers have determined that software corrected distortion can allow for them to focus on other aspects of lens design and make an overall better image post-correction. The RF 85mm does correct well and still shows good sharpness after distortion correction. Below, you can see an uncorrected image, with that slight pincushion showing as bowing at the edges of the building near the left of the frame. As an aside, this shot is handheld at 1.6s, while braced against a railing…that IS+IBIS of the R6 is excellent.

The RF 85mm f/2 does show rather strong vignetting wide open, which eases upon stopping down. By f/4, it’s much improved but there is still some residual vignetting there as well.

Flare performance is mixed. Veiling flare is relatively good, with minimal loss of overall contrast with bright lights just out of frame, though when a bright source is in the frame, green and purple ghosts appear. They’re fairly small in size, but there are quite a lot of them, so it’s definitely something to watch out for.

Overall, I’m very pleased with the optical quality of the RF 85mm f/2 Macro. It’s a very sharp lens with nice bokeh and good color and contrast. The lens is an improvement over the earlier EF 85mm f/1.8, and adds extra capabilities with 1:2 close focus ability as well.