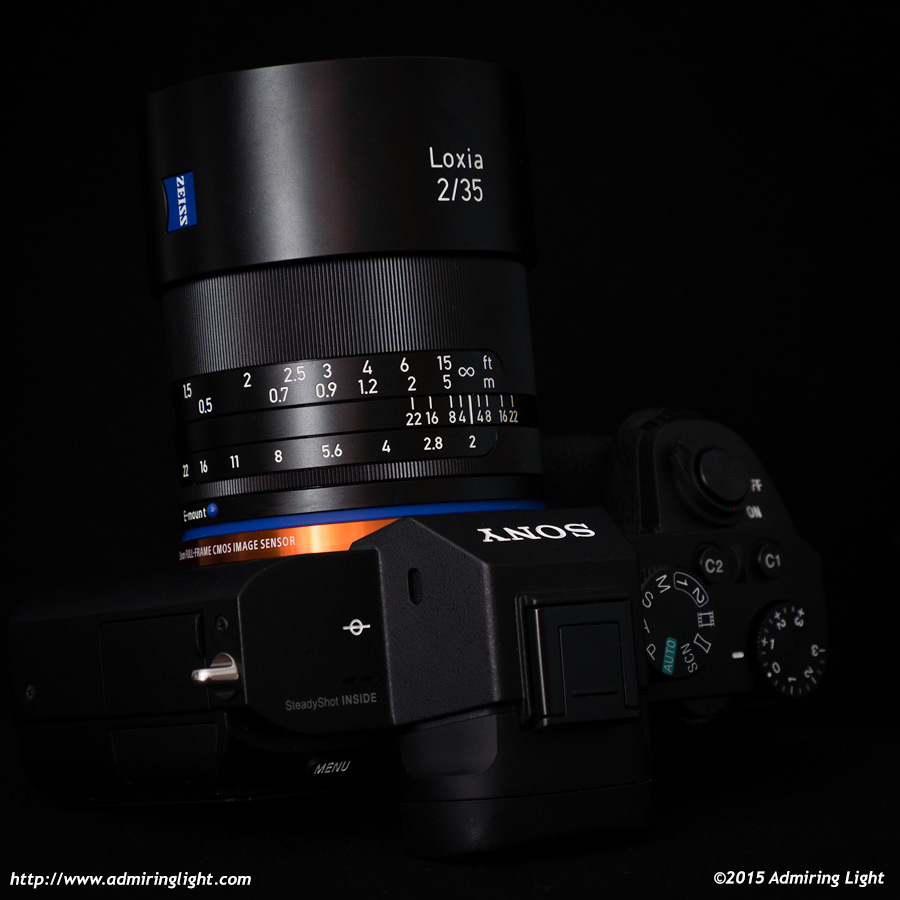 Zeiss has an interesting strategy when it comes to the Sony FE mount. There are three lines of Zeiss lenses.  The first, is a joint venture with Sony to co-design native lenses such as the FE 16-35mm f/4 and FE 55mm f/1.8.  Then there’s Zeiss’ autofocus Batis line, and finally the small manual focus Loxia line.  As of this writing the Loxia lineup consists only of two lenses: A 50mm f/2 Planar and the lens reviewed today: the 35mm f/2 Biogon.  Both lenses are native E-Mount lenses, and both are digitally optimized designs that were slightly modified from the existing ZM line of rangefinder lenses to give better performance on the A7 series of cameras.  The Loxia 35mm is a small lens with a big price tag.  The $1,299 retail price for an all-manual lens in this day and age raises some eyebrows, but let’s see if the cost is worth it, or whether your money is best spent elsewhere.

The Loxia 35mm f/2 Biogon is an all-manual lens, and as such, the lens is rather compact without the need for an electronically controlled diaphragm or autofocus motor.  The lens is constructed of solid metal and glass, and feels incredibly solid and dense.  it’s notably heavier than it looks, and oozes quality in material workmanship.  There are no wobbles or flex points at all, and the aperture and focus rings are precisely machined.  Overall, the size and handling are a perfect fit for the A7 series bodies.  You get a larger aperture than the FE 35mm f/2.8 in a lens that’s only marginally larger in size (though it is a fair bit heavier).  The lens has some weather sealing, with a bright blue gasket surrounding the lens mount to help prevent intrusion of moisture, but as I understand it, no other sealing is present.

The broad manual focus ring is finely ribbed and beautifully damped.  The focus helicoid is one of the smoothest and most perfectly damped of any lens I’ve used, and I’ve used over a hundred manual focus lenses from bygone eras.  My favorite focus feel was found on a relatively cheap Pentax SMC Takumar 50mm f/1.4.  I used to simply flip that focus back and forth just for the feel of it, and the Loxia is very much the same.

The aperture ring is a bit small and blends into the barrel a bit, and I sometimes found it a bit finicky to adjust after focusing the lens.  However, the actual ring action is also lovely: firm, but not too firm, with nice clicks at each 1/3 stop increment.  For video use, the lens can be switched to clickless aperture, to allow for silent and continuous diaphragm adjustment, which is a great feature to have.

The lens comes with an included metal lens hood that is small and provides good coverage.  That sounds nice, but in practice, I absolutely hated the hood design.  For some reason (likely aesthetics), Zeiss thought it would be a good idea to put the bayonet mount for the hood a bit inside the hood itself.  This makes the hood cover the front part of the lens slightly.  This wouldn’t be a big deal except that the front element (and thus the hood) extends during focusing.

Too often, I’d change focusing from close up to further away and suddenly the hood would be pressing into my fingers as the lens shortened, and the hood starts covering the end of the focus ring.  With such a small lens, the more room for my fingers on the barrel, the better, and having the focus ring effectively shorten itself due to the hood during focusing was annoying.  It also caused annoyance if I took the hood off for more than a few seconds, as the hood looks like a simple cylinder from the outside, and unless you look at the logos or the interior construction, it’s easy to accidentally put the hood in its reverse storage position when putting it on for shooting and vice versa.  It looks nice, but otherwise, I found it frustrating.

Being a fully manual lens, there’s no autofocus capability to discuss, but I thought I’d discuss how things work in general operation here.  I use a lot of manual focus lenses on my A7 II (In fact, the FE 55mm f/1.8 is the only native lens I own for the camera at this point).  I’m used to focusing, then stopping down the aperture to shoot, and the same things apply here.

The lens utilizes fully manual focus, and the electronic contacts on the lens are used solely for EXIF recording (and thus also passing focal length to the A7 II’s IBIS system) and telling the lens that the focus ring is being moved.  This allows the camera to auto-magnify the view for more precise focusing: a nice touch. This makes manual focusing on static subjects fairly easy.  However, focusing for moving subjects or candid shots of your kids is much more difficult, given the shallow depth of field at f/2 and the lowered precision when focusing stopped down.  Which leads to my biggest gripe in operation:

I’m unsure why Zeiss couldn’t have allowed for electronic aperture control here.  The mechanisms aren’t large, and it would make things a lot easier.  For a dedicated E-mount lens at this price point, it’s frustrating to be saddled with fully manual aperture control. One really needs to focus at wide apertures for the best precision, but then you need to stop, hold position, adjust the aperture to shooting aperture and take the shot.  Simply having the aperture remain wide open for focusing and electronically stop down to the set f-stop when shooting would make the lens much nicer to use in the field.  Again, I’m used to this behavior from my adapted manual focus lenses, but it stands out a bit more on a native E-mount lens that has electronic communication with the camera.