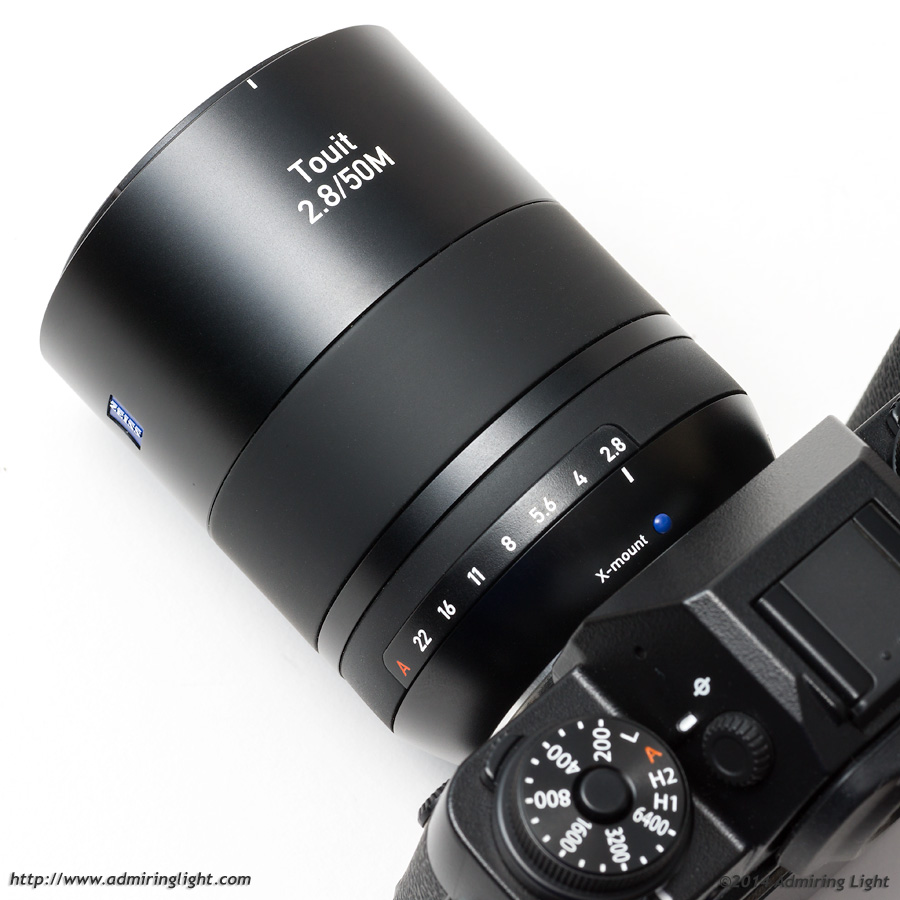 While sharpness isn’t the end-all be-all of imaging parameters, it is of primary importance in a macro lens.  Additionally, sharpness tends to go hand-in-hand with the Zeiss name, and the 50mm f/2.8 Macro is no different.  The lens is exceptionally sharp in the center right from f/2.8, and the image borders don’t fall too far behind.  There is some light softness at the edges at wider apertures that quickly clears up to yield excellent cross-frame sharpness stopped down.

What’s remarkable about the Touit 50mm is that it maintains this high image quality throughout the focus range.  It is especially sharp in the macro range, and even seems to do pretty well in resisting the effects of diffraction at smaller apertures. The Fuji 60mm takes a big hit in resolution around f/11, while the Zeiss 50mm keeps its bite at f/11 and only softens slightly at f/16.  In the mid range and infinity distances, the lens loses a small amount of resolution, but it’s still very good.  Wide aperture use is a bit softer than close up on the edges, but the center remains extremely sharp.  Stopped down at further focus distances still yields very good corner sharpness as well.  It’s hard to ask much more from a lens.  Click on the image above taken at f/5, and then click on the green arrow at the bottom of the screen to view a larger version of the image to see the kind of resolution I’m speaking of.

The Zeiss 50mm is a bit of a mixed bag when it comes to bokeh.  While the sharpness profile is fairly consistent throughout the focus range, the bokeh changes its nature as we start focusing out of the macro range.  Zeiss has crafted the lens to provide absolutely gorgeous out of focus backgrounds in the macro range.  Coupled with the contrast and color produced by the lens, it results in simply beautiful close-up shots.  The bokeh is smooth and creamy at these close focusing distances.

However, once you move into the portrait range and further away, the bokeh becomes much busier.  Specular highlights gain a bright ring and there’s a general nervousness to the backgrounds.  While it isn’t necessarily bad bokeh, it’s also not going to be a selling point for most people in the portrait range. One positive is that the lens has nice curved aperture blades, which keeps specular highlights circular even when stopped down all the way to f/8.  Nice job there.

However, take a look at the image below to see some of the beauty that the lens can produce up close.

Another reason I choose the image above to show the bokeh is that it also is a prime example for the exemplary color and contrast the Touit 50mm produces.  Like many Zeiss lenses, there is strong image contrast at all apertures, though they seem to have backed off the micro-contrast just a touch, which really gives the images a unique look that is both smooth and punchy at the same time.  There is outstanding color response as well, with rich saturated colors and a generally neutral color palette.  When combined with the excellent bokeh in the macro range, the Touit 50mm produces one of the most beautiful renderings of any macro lens I’ve used.  It’s actually quite reminiscent of the Sigma 150mm f/2.8 Macro for SLRs, and that’s very high praise indeed.

In addition to the excellent color and contrast, the Zeiss 50mm controls chromatic aberration exceptionally well.  In fact, it is essentially apochromatic to my eye.  I did not see a single purple fringe (even on chrome), no field relevant lateral CA and no field relevant longitudinal CA.  The lack of longitudinal CA is especially important given the macro capabilities, as having a green or magenta fringe on the out of focus areas can really ruin a good shot.  Truly a great performance here.

The Zeiss 50mm, like most macro lenses, has essentially zero distortion.  Lines stay straight and things look very nice in this department.  The lens also does a very nice job in the vignetting department.  While there is some corner and edge darkening at f/2.8, it’s quite minor and is gone by f/4.  The Touit 50mm also performs quite well against bright light, maintaining strong contrast and minimal ghosting even when the sun is in the frame.  Given the relatively deep hood and the small front element, it’s rare that the lens will experience much in the way of veiling flare.