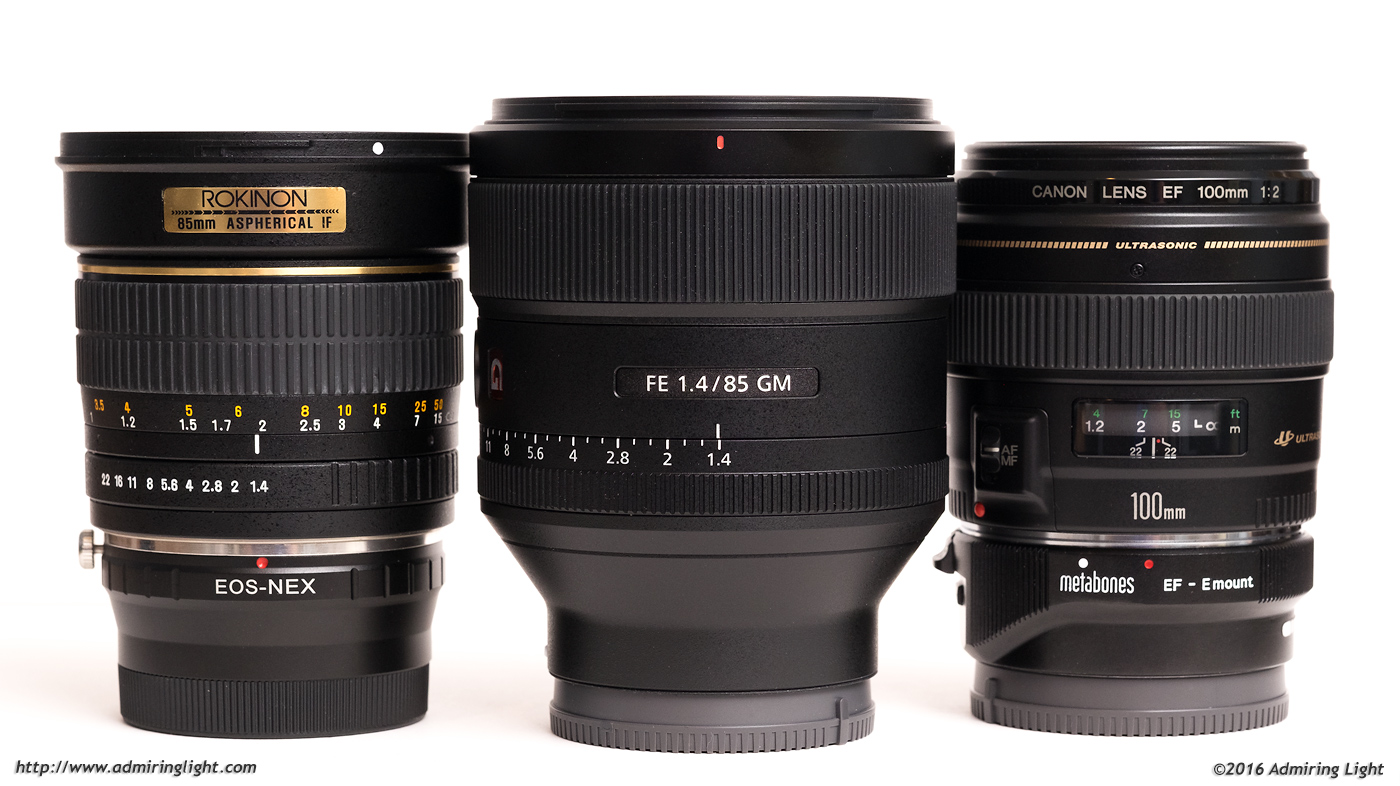 Today I’m comparing the new Sony 85mm f/1.4 G Master against the two full frame portrait primes I happen to own.  I know many would like to see a comparison with the Batis 85mm (reviewed here), but alas, I do not have one handy.  Still, this is an interesting comparison, as it pits the newest ultra-high end portrait prime against two pretty significant underdogs: the ultra- cheap, but highly regarded Rokinon (Samyang) 85mm f/1.4, and my trusty Canon 100mm f/2, a design that’s 25 years old, but still a seriously quality optic (that happens to work great on Sony with a smart adapter). The 85mm f/1.4 GM comes in at a whopping $1800, while the other two options here are a little easier on the wallet.  The Canon 100mm f/2 retails for just $500, though you’ll need to add in the cost of an AF adapter if you don’t already own one.  The Rokinon is an astoundingly cheap $270…yet shares the same ultra-fast maximum aperture with the Sony.  So is the extra grand+ worth the cost?

This should be quite a mismatch here.  We’ve got the latest and greatest ultra-fast 85mm f/1.4 G Master from Sony, a super-cheap, but well-regarded fast manual focus lens from Samyang (and sold under the Rokinon brand in this case), and a 25-year-old lens design from Canon that continues to perform well despite its age.

The lenses differ greatly in size and weight, despite similar lengths (once you take the adapters into account).  The 100mm f/2 and the Rokinon share a similar diameter through most of their lengths, with the Rokinon flaring to a 72mm filter thread at the end, while the Canon maintains a modest 58mm thread.  The G Master is notably fatter than the other two lenses, and uses 77mm filters, though the filter thread is narrower than most of the lens body.  The biggest physical difference is in weight.

The Sony is nearly 300g heavier than the other two lenses, which is a substantial difference.  Of course two of the lenses use autofocus, and despite the adapter, the Canon is actually a touch faster than the Sony, though it’s a rather small difference overall.  And finally, the Canon is of course longer in focal length and a stop slower.  The extra focal length means it only gives up around a half a stop to the others in blur capability despite the stop slower aperture.

For this test, I set a flat target up outside, at a focus distance of approximately 2 meters, which is a distance that would allow for a head and shoulders portrait in the horizontal orientation, to add some context.  There were trees in the background with sunlight shining through from behind to dapple the leaves in color (which can often pose bokeh challenges with some lenses).  The camera was set on a tripod and each lens was manually focused at 10x magnification wide open, and then the aperture was stopped down for the exposures.  For the 100mm f/2 exposures, the tripod was moved back to maintain the same framing on the book cover.

To get an idea of overall rendering of these lenses, here is the test scene from each lens at the widest aperture (f/1.4 for the Sony and Rokinon, f/2 for the Canon):

Looking at the above, a few things are visible right away.  The Rokinon and Sony both have beautiful creamy bokeh at f/1.4, and while the Canon’s is pretty good, it’s just a bit harsher.  As you’ll see in the bokeh test below, this tends to even out somewhat at similar apertures, but wide open, it’s noticeable.  It’s also, of course, noticeable that the two f/1.4 lenses can produce a bit more background blur, if that’s your thing.

Now let’s get on to the crops.  Below are 100% crops from the center/left third of the frame, which is close to where you may place a subject at this distance. Click on the image to open, and be sure to zoom in to view at 100%.

At f/1.4, the Sony already produces excellent resolution.  The Rokinon lags a bit here, but still produces good sharpness, but it’s just not on the level of the Sony.  At f/2, you can see that the Canon 100mm f/2 does a great job, producing an image that is similar in sharpness to the Sony at f/1.4.  The Rokinon also improves a bit, but still lags the Canon slightly.  The Sony, on the other hand, is at another level, producing absolutely razor sharp images in the center at f/2.  Stopping down steadily improves the other two lenses, with the Canon slightly ahead of the Rokinon, but still never quite catching the Sony, though it gets close by f/4. Very impressive performance from all three lenses, but the Sony is a cut above.

Now let’s get on to the corner crops.  Again, click to open full size in a new tab.

Again, all three lenses are excellent here, with all producing fairly good corner resolution even wide open.  However, the Sony 85mm GM is simply stunning straight from f/1.4.  It overshadows the already very good performance of the Rokinon by producing very sharp results into the corners even wide open.  At f/2, the Canon produces great resolution too, but it can’t quite match the Sony at this aperture, and the Rokinon is a touch behind.

However, something odd starts to happen at f/2.8: The Sony actually gets softer, while the other two surpass it.  Indeed, at f/2.8 through f/5.6, the Canon is the sharpest of the three, followed very closely by the Rokinon.  Why does this happen?  Examining the files closely, it is apparent that the Sony actually shows increasing field curvature when stopping down.  In the full image, at f/2.8 and smaller, the edge of the focal plane bends a bit towards the camera, making the front of the wooden railing very sharp, but the book softer.  By f/5.6, the extra depth of field has started to recover the softness due to the bent focal plane.

While this is good to know, it’s really not going to be a major issue in practice.  It’s rare that you will be shooting perfectly flat subjects at this distance and range of apertures, but if you are, take note.  It’s also worth noting that while things do soften on the flat plane due to this field curvature, the resolution, even at f/2.8, is still quite decent…it’s just not tack sharp like it was earlier.

Now let’s move on to bokeh:

When I look at the above, I honestly only see subtle differences.  The Sony and Rokinon both produce gorgeous bokeh at f/1.4, and stopped down, all three lenses produce very similar renderings in this scene, though the Rokinon is just a touch softer in the background.  It really is a cream machine.  Still, you can’t really go wrong with any of these lenses for pleasing bokeh.

Well, all things considered, the new Sony 85mm f/1.4 GM is one serious performer.  It’s blisteringly sharp, and even produces outstanding cross-frame sharpness at f/1.4, though it shows a touch of field curvature at the corners at smaller apertures.  The Canon is a fantastic all around performer, not quite matching the Sony at wide apertures, but coming darn close in the center and bettering it in the corners at smaller apertures.  The Rokinon, while probably the worst in pure performance in this comparison, is still very, very good.  It’s got decent resolution wide open and very good resolution stopped down, while producing the creamiest bokeh and a very nice rendering.  It also wins for pure value here.  Is the Sony worth the huge price premium over the others?  For some, that will be a yes.  It’s among the finest short telephoto lenses around, and it simply produces outstanding clarity and a beautiful look.  If you need AF and fast speed, it’s almost a no-brainer even at this price.  However, many people are budget constrained, or simply don’t need an f/1.4 aperture.  For those shooters, you’d have no issues using either of the other two lenses, or several others not tested here, such as Canon’s 85mm f/1.8 (which is very, very similar to the 100mm f/2), or the Zeiss Batis 85mm f/1.8.

Stay tuned for my full review of the Sony 85mm f/1.4 GM, which will be coming in the next few days.