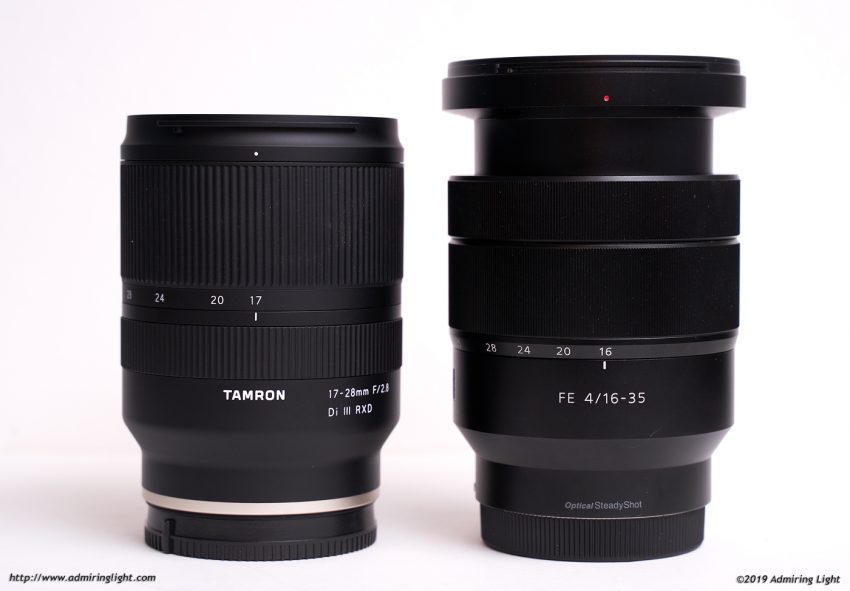 Tamron just released their brand new 17-28mm f/2.8 Di III RXD lens for Sony E-Mount, and it’s a very intriguing offer from Tamron.  The lens retails for $899, which is $450 cheaper than the Sony/Zeiss 16-35mm f/4 OSS that is involved in this comparison, and a whopping $1,300 less than the equal aperture (but wider range) Sony FE 16-35mm f/2.8 GM.  I happen to already own the 16-35mm f/4, and have used it to great effect over the past 4 years.  I got the Tamron 17-28mm f/2.8 in on Friday and have already done some shooting around with it.  Today I did a very informal test to compare the 17-28mm f/2.8 to my Sony/Zeiss 16-35mm f/4. I say informal, as I didn’t have much time to set up, and as such I had some differing lighting conditions between shots due to passing clouds.  I didn’t have time to reshoot all series to ensure they were perfectly equally lit.  Also, take this test for what it is: a comparison of a single example of each lens.

The Tamron 17-28mm f/2.8 is a new lens that features a fast constant f/2.8 aperture in a surprisingly compact and lightweight body.  It is constructed of high-grade plastics and weighs a surprisingly lightweight 420g.  The Tamron has a fairly short zoom range, stopping at 28mm rather than the more typical 35mm of most ultra-wide zooms.  This shorter range allows the lens to stay very compact while keeping that large f/2.8 aperture. The lens does not extend while zooming, as all zooming is done internal to the outer lens barrel.  It features a 67mm filter thread.

The Sony/Zeiss 16-35mm f/4 was the first ultra-wide zoom for the full frame E-mount system, and is constructed with a full metal exterior, a 72mm filter thread and extends while zooming.  The 16-35mm f/4 does have a built-in optical stabilizer. While the 16-35mm f/4 is a full stop slower than the Tamron, it’s actually a slightly larger lens.  It’s the same length as the Tamron when zoomed to the 35mm position (its shortest physical length), but is a touch wider in diameter.  When zoomed to the wide end, the Sony is about a cm or so longer than the Tamron.  it weighs in at 518g, around 23% heavier than the Tamron despite the slower aperture.

I set up my camera on a tripod, angled to the scene (near infinity) to allow for comparison at the extreme corners at the plane of focus.  I took a quick series of shots with each lens at 17mm, 23mm and 28mm, from wide open through f/8.

The full scene is below:

As you can see above, the Tamron is consistently sharper than the Sony at the wide end of the zoom range.  It’s especially pronounced at the widest apertures, where the Tamron at f/2.8 is as sharp as the Sony at f/4 in the center, and even sharper than the Sony in the corners, despite being shot at a stop faster aperture.  With both at f/4, the Tamron increases its lead.  At f/5.6 and f/8, the Sony catches up quite a bit in the extreme corners, but never quite equals the Tamron, while also losing out in the center.

At 28mm, the lenses are definitely closer to one another than at any other focal length.  While the Tamron still shows a slight corner edge at f/4 the two lenses are nearly identical in the corners at f/5.6 and f/8.  Tamron still holds a slight edge in the central part of the frame at all apertures.

I also took some comparison shots at closer focus distances, but I’ll just show the 17mm crops below.  I forgot to take 28mm shots on the Sony on this close focus test, and the 23mm test shows nearly identical results as in the shots above.  Below are 100% crops from about 6 feet from the wall at 17mm, again, a passing cloud varied the light.

Again, the Tamron shows itself to be superior in resolution over the Sony.

While the changing light prevents me from making any real judgements on color and contrast, it is quite clear that from a resolution standpoint, the new Tamron 17-28mm f/2.8 is a cut above the Sony 16-35mm f/4.  Of course, sharpness is only one part of a lens, and I’ll be doing a full review on the Tamron 17-28mm f/2.8 in the coming weeks and will fully evaluate the image quality and operation of the lens.  However, in my short time with it so far, it appears to be a winner.