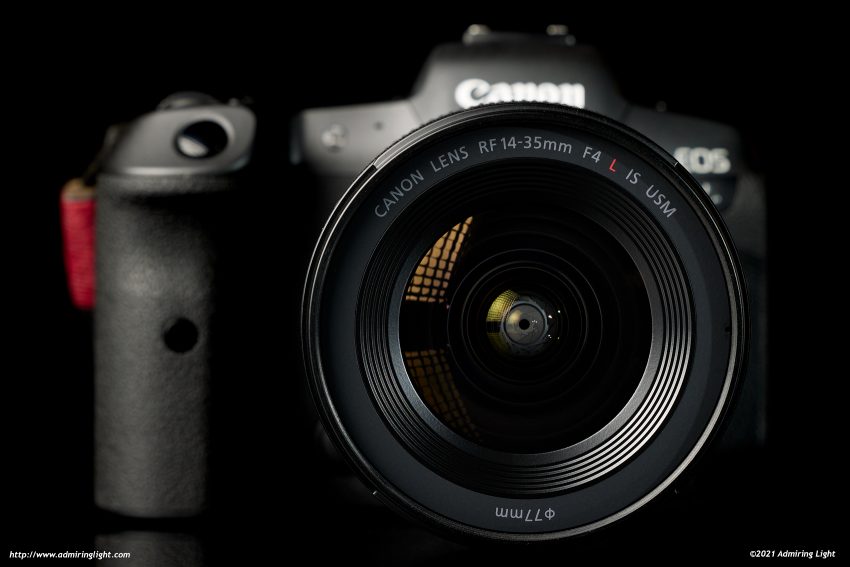 When looking at a lens like this with a 14-35mm zoom lens that is this compact and lightweight, your first thought might be that it must have some compromises when it comes to optics. And you would be right. I’ll cover those compromises in detail, but I will say that overall I think Canon struck a nice balance here.

A quick note before we get into the discussion about sharpness. As you will see in the section on distortion, the RF 14-35mm f/4L has a rather extreme level of barrel distortion at the wide end of the zoom range, and correction of that distortion is essentially mandatory at the 14 and15mm focal lengths. Sharpness evaluations are done on images that have been corrected for distortion when talking about the wide focal lengths.

The 14-35mm f/4L IS USM is a lens that is predominantly sharp throughout the focal range. Beginning at the wide end, the lens displays outstanding sharpness over the central 75-80% of the frame right from wide open, with softer edges and corners. Stopping down to around f/8 to f/11 raises border sharpness to good levels, with the corners still retaining a bit of softness, mostly due to astigmatism. Compared to the very best 14mm zoom lenses, such as both the DSLR and mirrorless versions of the Sigma 14-24mm f/2.8, the RF 14-35mm compares very favorably in the central 3/4 of the image frame, but lags a bit at the edges. Below is a tripod mounted shot that shows what you can expect stopped down on a stable platform. Click here for a 100% crop of the upper right corner.

The lens improves once you get to around 20-30mm, producing good sharpness over most of the frame wide open, with excellent central sharpness and very good edges and corners when stopped down. Towards 35mm, the lens is a little softer wide open than at the middle focal lengths, but I find it sharpens up nicely across the frame when stopping down.

When shooting at 35mm near the minimum focus distance, taking advantage of the pseudo-macro capabilities, it is advisable to stop down a stop or two. At f/4, the images when focused close are rather soft, but they sharpen up nicely when stopping down to f/6.3 or f/8.

Overall, the lens is reasonably sharp wide open, and very sharp when stopped down, save for a bit of edge and corner softness at the widest focal lengths. Edit: 4/26/22 – after using a second copy that I have picked up for myself, I have noticed that the lens performs best at the wide end at f/5.6 and f/8, and softens a little at f/11 and a lot at f/16. When shooting at the more moderate apertures, edge and corner sharpness is pretty good. There is still the slight smearing from distortion correction, but overall, I’m quite pleased with the performance.

Being an f/4 wide angle lens, the RF 14-35mm may not seem like a lens that would be able to blur the backround much, but due to the excellent close-focus abilities of the lens, it’s fairly easy to get significant subject separation. Wide open, the blur is actually very pleasing from the RF 14-35mm. Specular highlights are smooth and even and the overall bokeh is rather creamy. When stopping down to increase sharpness a little, you can get small points of light on the edges of specular highlights, as can be seen in the shot below, but I find the overall look to be still rather nice.

Like all L-series lenses, the RF 14-35mm f/4L produces images with very good contrast and rich color throughout the focal range and aperture range. Only at very close focus distances is there a small loss in contrast due to spherical aberration.

One minor flaw with the lens is in the area of lateral chromatic aberration. Uncorrected, the lens produces a fair amount of lateral chromatic aberration at the widest focal lengths, which eases as you zoom in until it’s fairly negligible around 35mm. Like most lateral CA, this is easily corrected in RAW conversion. I did not see any field relevant longitudinal CA in my testing.

Now we come to the section where the largest compromises were made in creating a compact ultra-wide with this large of a zoom range. Beginning with distortion, the RF 14-35mm shows an absolutely massive amount of complex barrel distortion at 14mm. Much like budget lenses such as the RF 24-105mm f/4.5-7.1, the RF 14-35mm at 14mm is so distorted that the uncorrected image does not cover the image sensor, and as such will show fully black corners when uncorrected. As I mentioned, the distortion is also complex in nature, so standard barrel distortion corrections won’t properly correct the image.

As of the writing of this review, neither Adobe Lightroom/Camera RAW nor Capture One have the lens profile for the 14-35mm, which meant that for architectural subjects where straight lines are important, I utilized Canon’s own Digital Photo Professional 4 for RAW conversion. If you must use Lightroom, I did find that the profile for the RF 24-105mm f/4.5-7.1 does a fairly decent job at correcting the distortion, especially when set to 85% strength, though this does leave a small amount of residual barrel distortion in the center of the frame.

Above is an image taken at 14mm, first showing the native distortion and vignetting, from RAW in Adobe Lightroom. Following is the image with full profile applied in Digital Photo Professional. The uncorrected image is also a fair bit wider than 14mm, with the field of view reduced a little when correcting the distortion, however, natively it’s not quite as dramatic as shown in the second image, as this also was perspective corrected for keystoning, further reducing the angle of view.

As you can also see in the sample above, vignetting is obviously a major problem at the wide end of the zoom range, with fully black corners at 14mm, and still fairly high vignetting at the other wide focal lengths. Between 14-20mm, the vignetting doesn’t even improve that much upon stopping down, so some digital correction will be required if you want evenly shaded corners. from 24-35mm, vignetting is still moderate at wide apertures, but does improve upon stopping down, becoming mild at f/8 and smaller.

The lens has an average performance against bright light. In most circumstances, bright lights like the sun will not cause any major loss of contrast, which is excellent. There are a fair few small, yet faint ghosts that can appear when the sun is prominent in the frame. The lens also seems to bring out sensor reflections easily, as can be seen in the shot above.

Overall, the optical performance of the RF 14-35mm f/4L is strong, but with some notable caveats. The lens is predominantly sharp across most of the frame at most settings, yet lags a little behind the very best lenses when comparing edge and corner performance. Color and contrast are great, but the lens relies fairly heavily on digital correction of distortion at the wide end, and on correction of vignetting at most focal lengths, as a means to keep the lens compact.