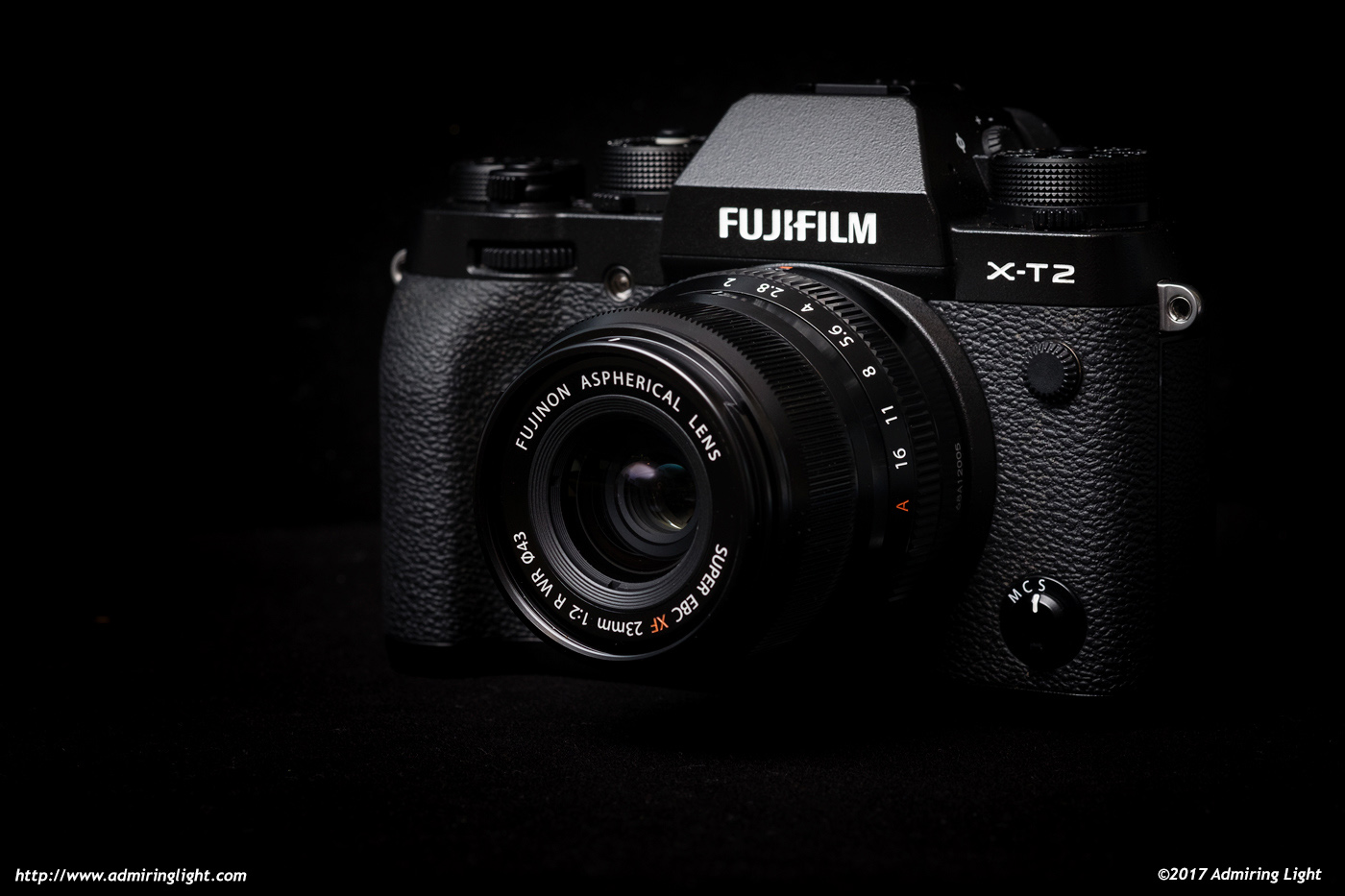 The Fuji X-T1 was one of the first mirrorless cameras with a truly huge viewfinder.  The 0.77x magnification is greater than that of the majority of full-frame DSLRs, and it made waves when it was introduced.  The X-T2 shares largely the same excellent finder as the X-T1, but with a few improvements. Response time has been improved, and refresh rate has improved to 100fps, such that it is even smoother than the excellent finder on the X-T1.  The optics are clear and the panel used, a 2.36 million dot organic finder, is excellent. Note that to have the 100fps refresh rate, the camera’s ‘Boost’ mode must be enabled (at the expense of some battery life), but I recommend doing this for most users.  Without boost mode, the finder refreshes at 60fps.  The panel is also brighter, providing a clearer view in bright sunlight, and the eyecup included is also nicer than the simple round eyecup found on the X-T1.  While these improvements aren’t game-changing, they do provide a nicer experience, and keeps the X-T2 near the top of the heap when it comes to EVFs.

The rear screen receives a more notable improvement, due to the excellent dual-tilting mechanism I discussed earlier in the review.  The rear screen can tilt 90 degrees horizontal, and around 45 degrees down (to view when the camera is above you). The new axis allows for pulling the screen out around 70 degrees for low or high shooting in the portrait orientation.  I really like the mechanism, as it is solid and easy to access.  Getting it to partially articulate in both axes (as shown above) is possible, but requires pulling the screen out away from the body before activating the second axis of tilt. The rear panel is largely the same panel that is found on the X-T1, a 3 inch 1 million dot affair.  It’s a good screen, and it provides a pretty accurate preview of your final image.  I enjoy touch screens on my mirrorless cameras, and while Fuji has started to introduce them on some cameras (last year’s X-70 and the soon-to-be-released X-T20), the X-T2’s panel isn’t touch sensitive.  However, given how nice the joystick works for focus point selection, it’s not a big deal.

The X-T2 has the same excellent manual focus aids that have been present in their X-Series cameras since the X-E2.  When manually focusing (with native or adapted lenses), you can choose to magnify the focus area for better precision (activated by a click of the rear command wheel), or enable focus peaking or Fuji’s unique digital split prism function, which overlays four bands that then align when the subject is in focus. It does this by utilizing the phase-detect AF points on the sensor. It’s great for manually focusing on things with distinct lines, but straight magnification or focus peaking will work better for focusing on people.

The X-T2 features the new X-Trans III sensor first included in the X-Pro2.  This sensor has an expanded phase-detect area that covers around half of the total sensor area, and should provide improvements to autofocus speed and accuracy over a wider portion of the frame compared to its predecessor.  I found the X-T2 to focus quickly and accurately in single shot mode, in essentially any lighting condition.  Slower lenses in dim light would slow down a bit, but overall speed was excellent, especially with the faster focusing primes like the 23mm f/2 and 35mm f/2. There may be an improvement here, but I found the X-T1 to be pretty good in this regard anyway, at least on the latest firmware.  The X-T2 has an even wider focus point arrangement than the X-Pro2 did at launch (though the X-Pro2 gained this wider arrangement via firmware update), with the basic mode showing 91 focus points, with an even finer 325 point grid available if you need extreme precision in focus point placement.  The additional points from the X-Pro 2’s original 77/273 point arrangement are in two additional columns at the edges of the frame, providing near 100% frame coverage.  Like the X-Pro 2, the central 13 columns (or 7 columns if in the reduced focus point arrangement), are phase-detect AF points.

The X-T1 had a small, but relatively effective phase detection area in the center of its sensor, and it was actually quite good at tracking subjects…for a mirrorless camera.  With the X-T2, Fuji has made a fairly substantial overhaul of the continuous autofocus system, and it goes beyond just a larger phase detection area.  Fuji has included 5 different continuous AF presets that alter the logic used for continuous focusing.  Some modes provide faster adjustment for quickly changing speeds.  Some modes are better at ignoring objects that temporarily obscure the subject, and so on.  There’s a 6th custom setting that allows you to adjust the parameters to your liking.

I didn’t have a chance to fully evaluate each of the presets in a wide variety of shooting situations, but I did test the continuous AF with moving vehicles coming at me, among other testing, and I found the accuracy to be excellent, and a notable improvement over the X-T1.  With the custom settings and the responsiveness of the camera to them, the X-T2 jumps to the top of the heap with regards to continuous focus accuracy among the mirrorless cameras I’ve had the opportunity to test.  The X-T2 managed to track and obtain a perfect focus rate of around 85-90% in my testing, a strong improvement over the X-T1.

It can do this tracking during an 8fps burst as well, and improvements to viewfinder blackout help here too, as the subject is visible for longer in the EVF while shooting. The X-T2, like the other X-Series cameras, can shoot with a single point active, a group of points (zone focus), or the entire sensor.  For continuous tracking, I found the zone focus mode to work the best.  In all, it’s not perfect, and will likely still be outdone by the top DSLRs in the business, but it should easily compete with prosumer DSLRs, and is excellent when compared to the mirrorless competition.

As mentioned, the X-T2 can do continuous AF tracking during an 8 fps burst with the mechanical shutter.  If you switch to the electronic shutter, continuous AF will not work between shots, but the burst rate can go as high as 14fps.  I didn’t get to test this, but adding the new vertical grip to the camera decreases shutter lag and increases the maximum burst rate to 11fps with the mechanical shutter.

In all, the X-T2 is an extremely responsive camera. Files write quickly thanks to the UHS-II compatible card slots, and the X-Processor Pro inside quickly processes images and commands, such that you never wait on the camera.

The feature set outside of the new CAF settings and the improved physical controls and tile screen is largely similar to the X-Pro 2, and therefore the X-T10 before it.  Fuji includes the standard Wi-Fi functionality that allows for transfer of files to a mobile device and a fully controllable remote shooting from your smartphone.  It can also use your phone’s GPS to geotag your images.  All of these WiFi features are identical to those on the 2nd generation Fuji cameras.  For a more detailed rundown of these, you can check out the X-T10 Key Features report for a more detailed look at the other features, such as the electronic shutter, intervalometer and in-camera RAW conversion.  These features were already quite robust, and really didn’t need any tweaking for this camera.

One area I would have liked to have seen tweaked is the still limited bracketing modes.  The 2 stops of exposure bracketing are an improvement on the X-Trans II bodies, but it’s still well behind what other makers have on their cameras.

Like the X-Pro 2, the X-T2 has dual card slots, and these operate identically to the X-Pro 2.The X-T2’s two slots can be configured to write data in one of three ways.

The entire time I shot with the camera, I chose to shoot with the camera set with the third option, which was outstanding.  I could offload RAW files when I downloaded to my computer, but had already generated JPEG images for quick sharing, or if I wanted to take a look at the camera’s output for a particular image, without having to take up my primary card’s space with JPEGs.  It’s a great feature to have, and I’m glad the dual card slots made their way to the X-T2.

One new feature that is brand new to the Fuji lineup is the addition of 4K video.  I’m not a videographer, but it’s nice to see Fuji finally check in on this front.  The X-T2 can shoot at 4K at 30, 25 or 24fps, and the bit rate is around 100Mbps.  The quality looks pretty nice to my eye, though there is a fair bit of rolling shutter if you move the camera to the side rapidly. Serious videographers aren’t going to generally be shooting with Fuji, as the cameras are geared towards stills shooters, but it’s a good option to have on the camera for those casual video shooters who still want high quality output.

Finally, with a new feature that has not been mentioned much anywhere, the X-T2 becomes the first interchangeable X-Series camera to allow for charging of the battery through the camera’s USB port, either when connected to a computer or through a USB charger and Micro USB cable. The charging time is slower than when using the dedicated battery charger, but this is a great feature that Sony cameras have had for a long time. I find it very nice to have charging capability simply by packing a small micro USB cable instead of Fuji’s bulky charger, and it also allows me to charge in the car if I’m traveling between shooting locations, simply by using a car USB charger. You may not use it often, but it’s something that I’ve enjoyed having on my Sony cameras, and I’m glad to see Fuji finally put it into their bodies. Thankfully, unlike Sony, Fuji does still include the dedicated charger with the camera.